Russia’s invasion of Ukraine is the third asymmetric global shock following the 2008 financial crisis and the COVID-19 pandemic, which may shrivel the global economy’s recovery path, says GlobalData. The leading data and analytics company notes that supply chain disruption, rising price levels and an uneven vaccination drive were the major risk factors globally in the first quarter of 2022.

Puja Tiwari, Economic Research Analyst at GlobalData, comments: “The outbreak of the Russia-Ukraine conflict in late February 2022 caused global financial markets to plunge and sent energy prices soaring. In March 2022, the inflation rate increased to its highest level in several countries including the US, the UK, Germany, and Brazil. With national governments across the world planning to adopt a gradual monetary tightening in 2022, the current situation leaves them with the heightened challenge of achieving a soft landing with the policy support withdrawal process.” 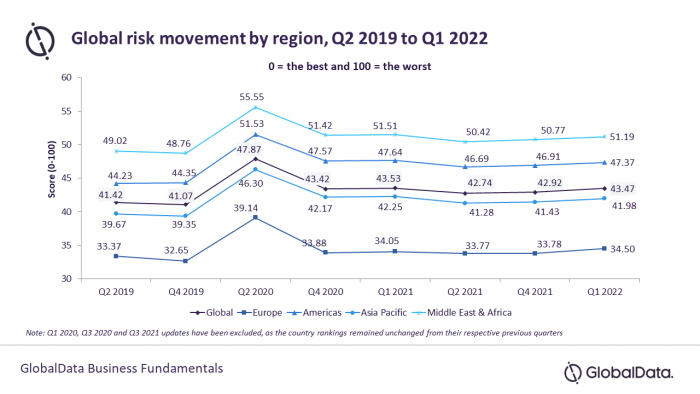 Although Europe remained the region with the lowest risk in Q1 2022, with a score of 34.5 out of 100, the risk score increased over the last update due to the impact of the Russia-Ukraine war. Rising inflationary pressure, high fiscal deficits, an increase in spending on defense and a massive influx of refugees within the region could potentially knock Europe’s economic prospects off track. While sanctions on Russia will weaken strategic sectors of the Russian economy by blocking the country’s access to technologies and key markets, they will also slow the recovery of Europe’s economy.

Switzerland, Denmark, Sweden, Norway, Finland, and Germany continue to remain in the list of the top 15 nations with the least risk in Q1 2022. 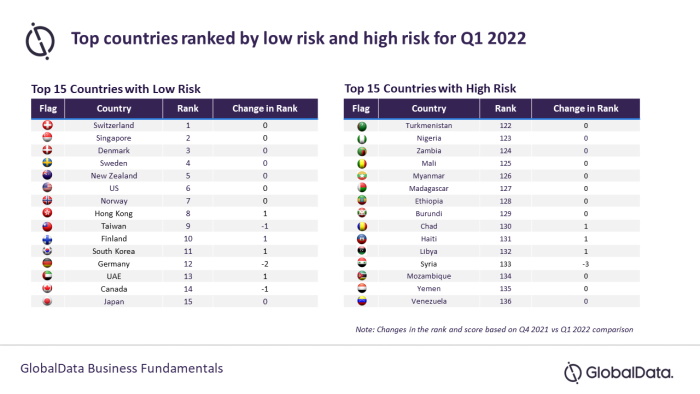 In Asia-Pacific, the risk score increased from 41.4 in Q4 2021 to 42 in Q1 2022. The political crisis in Pakistan, the ongoing economic crisis in Sri Lanka, China’s renewed COVID-19 restrictions and the closure of major manufacturing hubs remained the major risk factors in the first quarter of 2022.

The repercussions of China’s energy crisis in Q3 and Q4 2021 were felt in Q1 2022 across its manufacturing sector. GlobalData revised down China’s GDP growth from 5.5% in December 2021 to 4.5% in April 2022 due to a slump in factory activity amid supply chain disruptions driven by higher prices and energy costs.

Singapore, New Zealand, and Hong Kong remained the least risk countries in the regions in Q1 2022, whereas Pakistan, Myanmar and Turkmenistan remained the highest risk nations.

The Americas is the second highest risk region, according to the GlobalData Country Risk Index (GCRI) Q1 2022 update, with a regional risk score of 47.4 out of 100. According to the GCRI Q1 2022 update, the US’s rank remained unchanged at sixth out of 136 countries. Brazil, Colombia, and Ecuador exhibited the swiftest improvements in their rankings, reflecting a steady economic recovery amid the phasing out of pandemic restrictions. On the other hand, the risk rankings of Canada, Panama, and Uruguay fell further, as inflation and the debt crisis worsened.

While the US’s economic recovery remained on track through Q1 2022, risks in the form of economic repercussions of the Russia-Ukraine war, tighter monetary policy, peaking inflation, rising prices of crude oil, and increasing trade tensions with China loom large.

In the Q1 2022 GCRI update, the US and Canada remained in the list of the top 15 nations with the least risk.

The Middle East and Africa (MEA) region was the highest risk region in the GCRI Q1 2022 update. Social unrests, rising debt and inflation pose a major threat to the economic growth in the region.

Due to a rise in oil prices, there has been an increase in the revenue of the major oil producers and exporters in Middle East and African nations. However, the prices of imports are also rising amid a widespread increase in the price level of goods and services. Therefore, most of the developing and underdeveloped nations in these regions are facing higher import costs, which is adding to the insecurity and social unrest in the MEA region. Consequently, the region’s risk increased from 50.8 in Q4 2021 to 51.2 in Q1 2022.

Mozambique, Yemen, and Syria were the countries with the highest risk in the MEA region in the GCRI Q1 2022 update.

Tiwari concludes: “The spiralling rate of price increases is expected to remain a key risk factor for developing and underdeveloped countries, which may exacerbate the existing humanitarian crisis. Governments across the world need to reassess their policy framework to tackle the fallout from surging prices to meet economic redemption.”
Source: Global Data