Rapid decarbonisation of global energy supplies will have radical implications for the global shipping industry, detailed in a new report from MSI. Vessel selection will be critical, requiring divestment from sectors with the greatest exposure to fossil fuels.

The consequences for shipping markets of a major shift in energy consumption away from hydrocarbons and towards renewables and biofuels is the subject of a report prepared by MSI on behalf of the European Climate Foundation that projects two demand frameworks – ‘Reduction’ and ‘Reference’ – designed to provide broad narrative and structure to long-term global energy demand by fuel. MSI’s shipping market modelling systems were used to analyse how global fossil fuel demand reductions could alter inter-regional commodity trade flows and the associated shift in required shipping capacity, industry earnings and asset prices, across all segments of the shipping industry.

The MSI report does not provide commentary or assessment of the likelihood of the projected scenarios occurring, rather the scenarios are intended as frameworks to explore the implications for the shipping industry and associated capital markets of a major shift in energy demand. The two scenarios are informed by projections made or commissioned by the Intergovernmental Panel on Climate Change (IPCC) and the timeframe of the report is out to 2050, though the temperature targets associated with the IPCC scenarios have timeframe objectives that extend beyond this period. The Reference scenario is designed to provide a comparator to Reduction and describes a much more limited change in the global energy consumption profile. Under this scenario, global energy demand continues to grow robustly through the 2020s before stabilising in the 2030s. 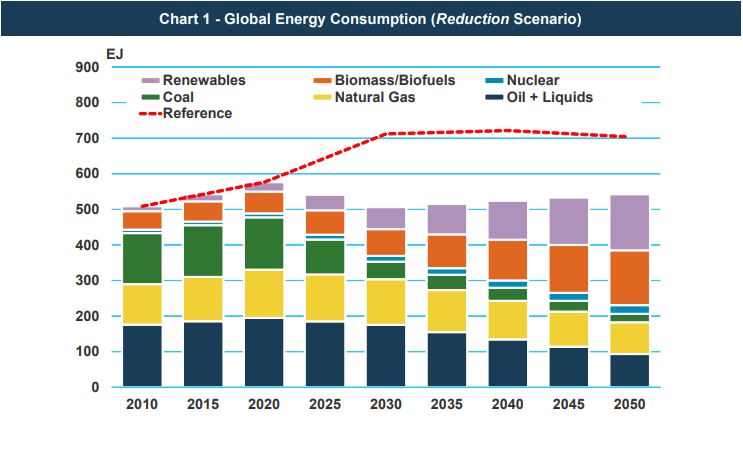 Even under the Reference scenario there is a transition in the composition of the demand. Fossil fuels see an overall decline in their usage but it is nowhere near as severe as in the Reduction scenario. Renewables see the biggest net gain across the forecast horizon, increasing from 5% in 2020 to 16% in 2050, whilst Biomass/Biofuels see substantial growth to 2030, rising to 12% of global demand, but see little proportional gain beyond that.

Global energy consumption in the Reduction scenario is largely based on projections made for pathways consistent with limiting warming to 1.5°C above preindustrial levels, as described in the IPCC SR1.5 report. Under this scenario, global energy consumption is not projected to see significant growth out to 2050, but rather, fluctuate close to recent levels, with significant reduction during the 2020s. Hydrocarbon use sees massive reductions. The most dramatic case is Coal which transitions from meeting about one quarter of global energy requirements to less than 5% by 2050. Over the same period the ‘Oil+Liquids’ share halves from about one-third to less than 20%. Of the major hydrocarbon energy sources, Natural Gas sees the least relative reduction, but nonetheless drops from about a quarter of global energy to close to 15%. Meanwhile the Reduction scenario assumes an explosion in the use of both Biomass/Biofuels and Renewables. Whilst the former presents its own environmental challenges, it also potentially offers alternative employment for ships. In the case of Renewables, this replacement of shipping demand is difficult to envisage.

The key point is that currently it is the energy that is being shipped in the form of coal/oil/gas, not the infrastructure used to harness it (powerplants, refineries etc). Mass renewable energy and vehicle electrification may require significant shipping of infrastructure materials and metals for batteries,etc, but this would be a one-off event in the energy chain, as these are components not feedstocks. The majority of commodity shipping is associated with moving primary feedstocks. Further, renewable energy in the form of wind, solar etc. cannot be shipped, only transferred electrically via fixed grid or battery once harnessed, so wouldn’t generate any trade in secondary processed commodities, such as you see now in the form of e.g. oil products and steel. In essence this is one of the key benefits of renewables – they don’t require a constant feed of extracted/polluting natural resources. 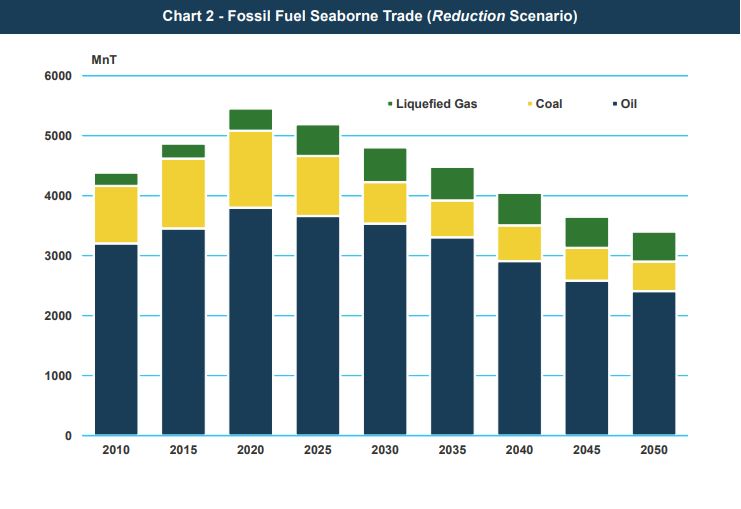 Taking the Reduction scenario as the focus of the report, MSI concludes that by 2050 world consumption of oil would halve, coal consumption would fall by 80% and natural gas demand would peak in the near term before declining. Whilst some sectors of the shipping market would be relatively unscathed – containerships being the most notable – sectors in which hydrocarbons make up a significant proportion of the cargo mix would undergo decades of stagnant or falling demand.

The oil tanker market is most exposed to the low carbon transition as its entire cargo base is made up of fossil fuels. Overall, MSI’s models suggest that under the Reduction scenario, tanker demand would fall by slightly more than a third. Bulk carriers would also see demand from coal transportation fall by around half, but overall demand for bulkers would fall by 14% from 2020 to 2035 before returning to modest growth in the latter part of the forecast as the expansion of grain and minor bulks trade offset shrinking coal cargoes.

Whilst falling demand is not unprecedented in the shipping industry, the sustained nature of the decline is. Setting aside the possibility of short-term factors driving spikes in demand, our models suggest that tanker demand would fall year-on-year every year from 2025 onwards under the Reduction scenario. Bulker demand would fall every year for fifteen years up until 2035. By contrast, although the collapse in tanker demand in the 1980s is of a similar scale at 39%, it was only five years before tanker demand began to pick up again. 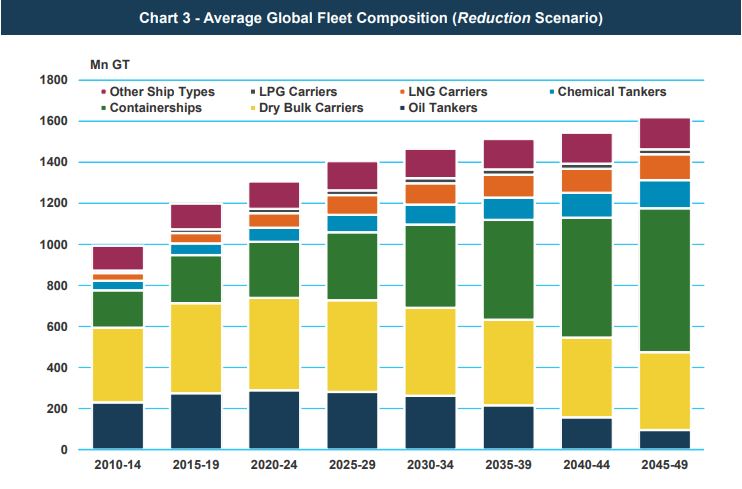 The destruction of demand has significant ramifications for owners and financiers of vessels. It will hurt fleet utilisation, and the earning power of tankers and bulkers would collapse in the Reduction scenario, as shown in Charts 4 and 5. Earnings for a Capesize bulker would spend the 2030s averaging roughly half of their long-term median earnings, whilst for a VLCC earnings would underperform their long-term median by around a third.

Of course, such dire markets would provoke a significant supply side reaction, as owners slashed new ordering and scrapped uneconomic vessels. The tanker fleet would fall by around a third over the two decades after 2030, whilst the dry bulk fleet would shrink for nineteen out of twenty years from 2025, shedding 14% of capacity relative to its 2024 peak. Asset prices would also be hammered, with a benchmark 5 Yr Old Capesize bulker losing 40% of its 2018 value by 2030 under the Reduction scenario, whilst a VLCC would slide by 29% over the same period (with the lower decline due to the weak tanker market in 2018 rather than any real resilience).

In aggregate under the Reduction scenario, by 2030 the dry bulk shipping industry would be worth half what it had been a decade earlier, although 2030 would mark the nadir and the industry would subsequently return to growth. The impact on the valuation of the tanker industry would be less dramatic but without respite, with the industry shedding 28% of its 2018 value by 2045.

There may, of course, be mitigating factors. Renewable or non-carbon fuels may emerge, as could synthetic fuels (eg from carbon capture), and all would provide alternative sources of demand that are ideally suited to conventional bulk or gas shipping. But all of these potential sources of demand are in their infancy and a distant respite from the bleak picture painted above. Given the scale of the potential challenge, what can the carbon-carrying portion of the shipping industry do to manage the risk? Supply side restraint is key; as reduced ordering would mean that both tankers and bulkers would recover from the shock of the low carbon transition and see the fleet employment rate recover. The second is vessel selection. The exposure of larger bulkers to coal implies a particularly negative outlook under the Reduction scenario, whereas smaller geared bulkers would show more resilience. 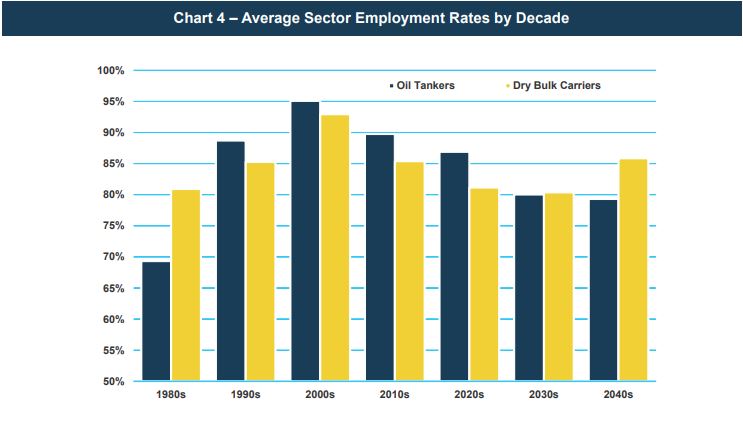 Ship financiers would also find themselves caught in a vice, with earnings unable to cover debt repayments and falling life expectancy reducing the runway to recover a loan before the vessel is scrapped. More efficient vessels may be somewhat better placed, as greater efficiency should lead to longer life expectancy. However, the prospects for successfully recouping a loan, never mind an equity investment, in a vessel heavily exposed to fossil fuel cargoes seem challenging under a Reduction scenario.

Assuming that commitments to cut carbon emissions will be met, the industry needs to prepare for the radical transition that this implies. Vessel selection will be critical, and potentially divestment from sectors with the greatest exposure to fossil fuels may prove the only way to profitably navigate the changing landscape. Furthermore, if the timeline posited above is accurate then the time to react is now. Most owners would assume a minimum vessel lifespan of 20 years when evaluating an investment, which means that investing in anything other than the oldest vessels today implies significant exposure to this transition. Notwithstanding this, discussion of these potentially disastrous demand-side dynamics is almost totally absent from the shipping industry. 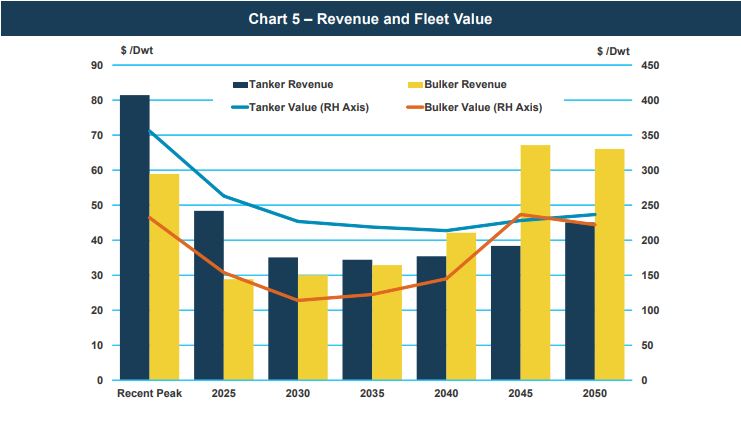 The concept of ‘stranded assets’ has gained increased traction in recent years, mostly to refer to reserves of coal, oil and gas that cannot be burned due to tightening emissions regulation and price competition from renewable energy sources. Most analysis of the financial risk of stranded assets has focused on the ‘upstream’ part of the energy sector, or electricity generation, especially coal-fired power stations. This report broadens the debate to encompass the fact that coal, oil, and liquified natural gas are all internationally traded commodities, relying on maritime shipping to function. The discourse within the finance community regarding such concepts can now hopefully be extended to shipping departments and the wider shipping industry.