World trade fell by 0.2% in March, with imports from China down 12% and Eastern European CIS countries by 16.4%. With China’s zero-Covid policy continuing throughout April and May, we don’t expect trade data to come in much better in these months. Although global schedule reliability, tracked by Sea-Intelligence, improved slightly in February and March, we expect it to have fallen back in April, overall remaining well below 2021 levels.

April data should not only capture the effects of the war in Ukraine but also the lockdown in Shanghai, which is having a profound impact on the Chinese economy and on logistics in the country. The container load leaving the port of Shanghai plummeted quite heavily compared to the beginning of the year due to the lockdown, as measured by the Kiel Trade Indicator, as you can see in the chart below. And even if cargoes can be cleared, there are difficulties with inland connections; truck drivers are sometimes being caught in quarantine controls, for instance.

Delays on the import side have mounted, in particular. As manufacturers lift production, a wave of export containers can be expected. Consequently, we expect the lockdown effects to spill over to other parts of the world in the coming months, although weekly offered transport capacity has been on the rise in the Asia-US shipping route to satisfy still relatively strong demand in the US. Consequently, shipping rates will remain supported at high levels, with the rise in crude oil prices additionally weighing on transport costs. According to Xeneta, average fuel surcharges alone have been rising by 50% across all trade lines since the beginning of the year due to the rise in crude oil prices. 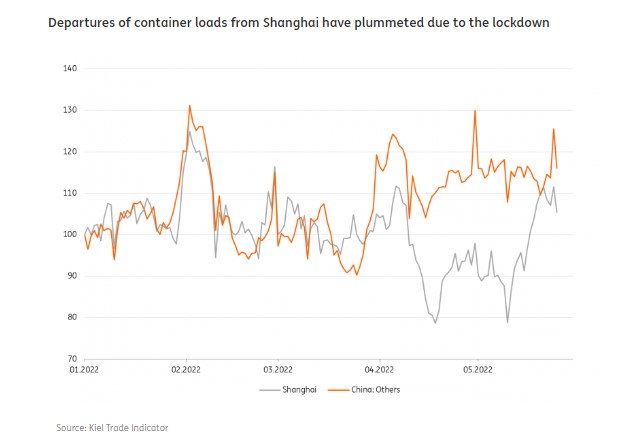 Shortages of inputs and labour add to the problem

Material and labour shortages also continue to hinder production and transport. This adds to existing material bottlenecks caused by the pandemic, while sharply increased prices make it difficult for manufacturers to calculate accurately for this year and to commit to prices for delivery to clients much later. More than 12% of goods are currently waiting on container ships at port areas globally, up 1.2 percentage points from April, according to the Kiel Trade Indicator, with most of them in China. Scarcity continues in the current market environment, which leads to enduring pressures. As a consequence, average transport rates remain elevated, although spot rates have eased somewhat. This continues to contribute to higher prices for producers and consumers on top of elevated energy prices.

Despite softer demand, the current backlog is enough to keep supply chains strained throughout the year

Overall, we are still facing a problem of under-capacity, mostly from the supply side. If we look at the latest available trade and supply chain data, pressures remain at historically high levels, and we don’t expect supply chain disruptions to ease substantially this year given the extremely volatile environment. Although weaker consumer demand from China due to dwindling growth expectations and Covid lockdowns, and the EU, due to eroding purchasing power, will alleviate some pressure on supply chains, industrial production is holding up well thanks to high backlogs of work due to shortages which is enough to keep supply chains strained throughout the year. We expect these headwinds to result in trade growth of somewhere between 1% and 2%, in our base case.
Source: ING