Go-Ahead For Deeper Fairway At The Port Of Gothenburg

On June 2, the Swedish Minister for Infrastructure Thomas Eneroth presented key elements of the government’s strategic infrastructure plan and budget related to the deepening of the fairways at the Port of Gothenburg. The decision means that the government will cover almost one-third of the cost of the project, which can now proceed to the next phase. Deeper fairways will allow the very largest vessels, both now and in the future, to call at the Port of Gothenburg fully loaded, opening up potential for more direct services and increased freight volumes between Gothenburg and the world. 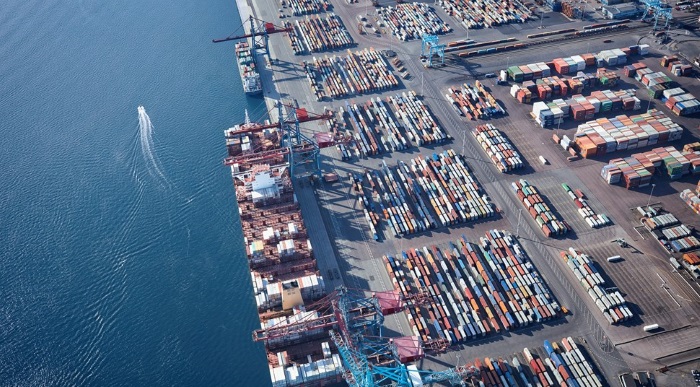 The deepening of the fairway will allow container vessels calling at the Port of Gothenburg to take on more containers. For the largest vessels, this represents an increase in capacity of around 50 per cent. Image: Gothenburg Port Authority.

“This decision by the government is good news indeed. It is confirmation that they value the significance of the Port of Gothenburg as the most important freight hub in Scandinavia, handling 30 per cent of our foreign trade. An investment of this magnitude will consolidate our position even further,” said Magnus Kårestedt, Gothenburg Port Authority chief executive, in his response to the decision.

Larger vessels require deeper harbours
Economies of scale have been the driving force behind the unrelenting increase in the size of freight vessels. This applies to all types of vessels but in particular container vessels, which have doubled in size in just 10 years. The Port of Gothenburg is the only Swedish port that can receive the largest oceangoing container vessels, although the fairway depth is limiting their freight loads on arrival. There are also vessels that are unable to enter the port regardless, and they are forced to head directly for the continent, bypassing Gothenburg completely.

Magnus Kårestedt explained: “This makes deepening of the fairways crucial, not only for current traffic but also if we are to receive the next generation of vessels.” 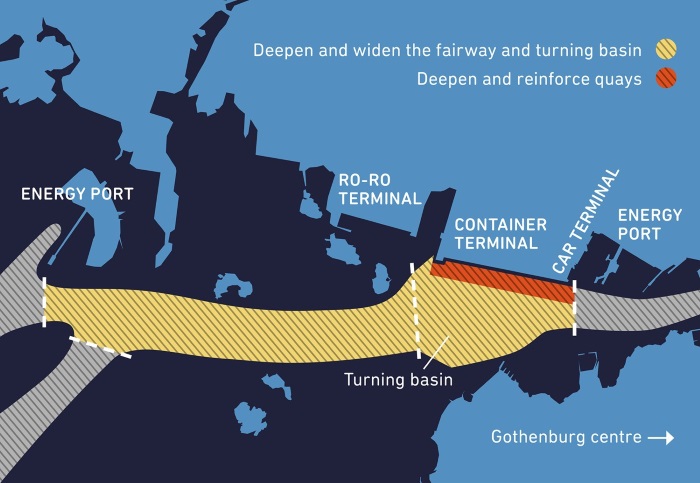 Illustration of the area in question. Image: port of Gothenburg Port Authority.

Financial foundation laid – work can now begin
The government’s 1.25 billion kronor contribution is almost one-third of the total fairway investment, estimated at around four billion kronor. The Gothenburg Port Authority will assume responsibility for half the cost, leaving a shortfall of around 750 million.

“Having received the decision in black and white, we can now set about the task of securing the remainder of the financing. We are already

discussing a number of options. With the financial foundation now in place, we can look ahead to drawing up a declaration of intent with the other parties to ensure the planning process can commence,” said Magnus Kårestedt.

Fact file: Deepening of the fairways at the Port of Gothenburg

• The measures that will be taken will involve increasing the maximum depth of the fairways and the turning area at the Container Terminal from the current 13.5 metres to around 16 metres.

• The measures will allow container vessels calling at the Port of Gothenburg to take on more containers. For the largest vessels, this represents an increase in capacity of around 50 per cent.

• The total cost of the project is set at four billion kronor, of which two billion is for water-based improvements, and two billion for quay reinforcement.

• The socio-economic benefit, calculated in terms of the net present value ratio is 3.04, which means that for each krona invested, society will receive four kronor in return.

• The estimated payback period is 15 years.
Source: Port Of Gothenburg