The New York Times wrote in 1981: “After 10 years of planning and construction, the $700 million Louisiana Offshore Oil Port opened for business on May 7, 1981 when the oil tanker Texaco Caribbean began discharging 1.5 million barrels of crude oil at LOOP. The crude oil’s arrival signals the beginning of the era of the superport and the supertanker in the United States.

“It took an act of Congress ‐ the Deep Water Port Act of 1974 ‐ to get permission to build the complex. Then came the environmental impact statement, which took another year an application was submitted in 1975 and approval was granted in late ’76. Construction started in 1978. Throughout that period, there was much haggling with environmentalists. The Interstate Commerce Commission and the Federal Energy Regulatory Commission fought over regulatory jurisdiction. The builders had to shop in Japan* for 54‐inch steel pipe because no domestic steelmaker could supply it.” 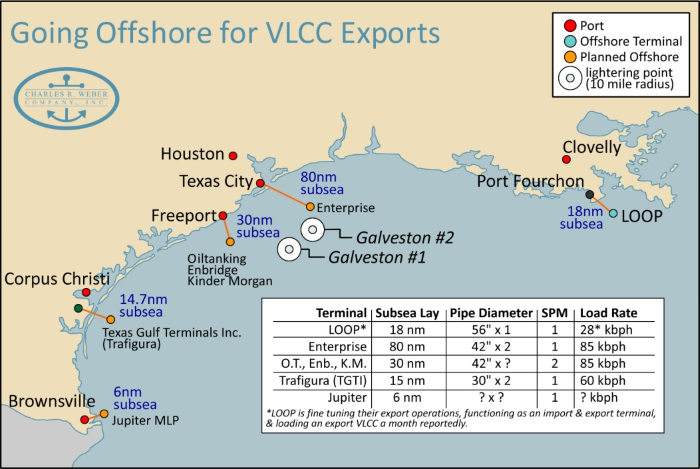 Thirty‐seven years later, this past February, LOOP announced that it completed its first‐ever loading of a VLCC with U.S.‐ produced oil for export at its deepwater port, 18 miles from Port Fourchon, La. In the intervening 37 years LOOP’s deepwater facility has offloaded more than 10,200 oil shipments but this was the first export for a terminal directly loading a VLCC.

Today, LOOP operates the only deepwater U.S. oil terminal capable of fully loading a VLCC. Repurposing LOOP into a multi‐purpose Gulf Coast crude receiving, storing, blending, trading and exporting world‐class oil mega hub has been on the drawing board for a while. Though actual crude access to the facility for export seems to be a little limited presently with the only export‐ready cargoes (one VLCC per month since February) coming from the USG offshore crudes from the Mars and Thunder Horse fields.

In the rapid quest to load VLCCs to completion offshore, a number of other projects are now in various stages of planning to offer full offshore loading closer to the massively productive Permian Basin other new crude plays.

One of these is a JV between Oiltanking, Enbridge and Kinder Morgan. Their planned offshore loading terminal will be 30 nautical miles offshore in 100’ of water and possibly accommodate up to two VLCCs loading at once. This will involve laying 30 miles of 42” subsea pipe, which is planned to produce a load rate of 85 kbph. Accompanying this will be shoreside pumps to get the oil out there and a new 10 million barrel storage terminal in Freeport with a scheduled completion date of 2022.

The shore facility will be connected to Phillips 66 / Andeavor’s (now Marathon) planned 700,000 barrel a day Gray Oak Pipeline that will run from the Permian Basin to the Corpus Christi and Freeport/Sweeny areas, and via Kinder Morgan’s existing Crude & Condensate Pipeline (KMCC) from the Eagle Ford to Sweeny. The plans also call for the facility to be connected to the Houston and Texas City areas, which will enable Oil Cos and traders to serve a wider market than just export if price dynamics change.

Another offshore project has been announced by Enterprise Products Partners LP, which has reportedly started front‐end engineering and design work (FEED) and is preparing permitting for a facility off the Texas Gulf Coast (though no more information as to the exact location has been released).

Enterprise said the facility will be the “most efficient and cost‐ effective” solution for loading VLCCs bound for Asia** and Europe. The plans call for the facility to be connected to the shore via 80 nautical miles of 42‐inch subsea pipe with a load rate of 85,000 barrels per hour.

As with all the other offshore projects, this one will also get around massive dredging projects (Corpus) and part loading / reverse lightering. Once permits are in hand and they have gauged firm customer interest, Enterprise will make their FID.

Another planned project by Jupiter MLP is aiming to build a terminal off the somewhat weather challenged westerly port of Brownsville, Texas. On the back of permitting for new terminals in the port and a new 2.5 million barrel storage and blending facility, Jupiter announced that they had commenced the engineering, permitting and design of a project, known as the Jupiter Offshore Loading Terminal, to construct an offshore VLCC loading facility 6 nautical miles off the Gulf coast. At this point no load rate or pipe diameter has been attached to the project.

In other news, Magellan is rumored to be working on an offshore solution, but nothing firm has been released yet. There is plenty of speculation out there about projects, but the realities and timelines for permitting, construction, subsea pipe lay (steel tariffs) and Jones Act navigation should not be under estimated. It took ten years and an Act of Congress to open Loop in 1981 and then industry watchers were concerned about America’s crude imports – if only they’d had an idea what would happen to U.S. domestic crude supplies in 2018.

Adding to the offshore race, Trafigura emerged this week with what appears to be a FEED completed, all documents filed with MARAD and USCG, application for Texas Gulf Terminals, Inc. for all Federal authorizations required for a license to own, construct, and operate a deepwater port for the export of oil authorized under the Deepwater Port Act of 1974 (thank you LOOP).

TGTI is proposing to build their terminal in 93’ of water 12.7 nm off the coast of North Padre Island, to export domestic crude at about 60 kbph via 14.71 nautical miles of 2 x 30” subsea pipe, terminating at an SPM. Inshore the project will be connected to a reportedly 6 million barrel storage facility in Nueces County (which spans the South side of Corpus) via a booster station in Kleberg County.

*U.S. steel companies are experiencing a price spike from the U.S.’s 25% steel tariff. The benchmark price of US‐made steel has moved 41% higher since the start of the 2018 to $917 per short ton, according to Platts.

**China announced today retaliatory tariffs on an additional $16 billion worth of US imports, including oil products, LPG and coal in a new list of affected goods but leaving off widely‐expected import duties on US crude. However, Unipec – the worlds largest spot charterer of VLCC tonnage – was previously reported to have suspended crude oil imports from the US.
Source: Charles R. Weber Company (Reported by John M. Kulukundis, Director of Research)

Previous: Transfer pricing – a reputational risk?
Next: The dilemma of fitting scrubbers