“Golar is pleased to report Q4 total operating revenues of $118.7 million, adjusted EBITDA1 of $78.0 million and net income of $9.5 million, driven by another quarter of uninterrupted commercial uptime in FLNG and a Q4 Adjusted TCE for the shipping fleet at $51,800 per day.

Previously announced sales of Hygo Energy Transition Ltd. (“Hygo”) and Golar LNG Partners LP (“Golar Partners” or “the Partnership”) to New Fortress Energy Inc. (“NFE”), in transactions with a combined enterprise value of approximately $5 billion, deliver on Golar’s commitment to simplify its corporate structure and crystallize value to Golar shareholders. The combination of NFE, Hygo and Golar Partners will also create the leading LNG downstream distribution company. Golar’s combined net proceeds of 18.6 million Class A shares in NFE and $131 million in cash, will, together with the $100.3 million of equity raised in December, significantly strengthen Golar’s balance sheet.

The successful delivery of the FSRU LNG Croatia (formerly Golar Viking) to LNG Hrvatska d.o.o. (“LNG Hrvatska”) released a further $51.7 million of liquidity between December 2020 and Q1 2021. This project was completed on time, on budget and in spite of significant COVID related constraints and is a credit to Golar’s project and operations teams.”

$75 million drawn down against FLNG Gimi debt facility. Total of $300 million drawn down as at December 31, 2020.
Golar Seal financing extended to January 2022.
Raised $100.3 million net proceeds from a public follow-on offering of 12,067,789 common shares.
Executed a new $100 million credit facility backed by Hygo shareholding (will be transferred to NFE shareholding post closing of Hygo and NFE transaction).
Repaid $150 million facility secured by Hygo shareholding and $30 million margin loan secured by Golar Partners shareholding.
Sold the FSRU LNG Croatia (formerly Golar Viking) to LNG Hrvatska releasing $51.7 million of liquidity between December 2020 and Q1 2021.
Entered into separate and independent merger agreements for the proposed sale of both Hygo and Golar’s interest in Golar Partners to NFE. Golar to receive a total of $131 million of cash and 18.6 million Class A shares in NFE in combined merger consideration upon closing of both transactions, expected within 1H 2021.
18.6 million Class A NFE shares valued at $910 million as of February 24, 2021, the equivalent of $8.28 per Golar LNG share.
On February 24, 2021, the Partnership’s common unit holders voted to approve the proposed merger agreement with NFE.
Share buyback program of up to $50 million of Golar’s common stock approved by the Board.

Q4 2020 average daily Time Charter Equivalent (“TCE”)1 earnings of $48,800 for the fleet.
Shipping results adversely impacted by: (i) waiting time ahead of longer-term charters, and (ii) a mechanical failure that reduced one spot vessel’s ability to capitalize on the stronger winter shipping market.
Inclusive of loss of hire insurance proceeds receivable in respect of the above-mentioned vessel, an adjusted Q4 TCE1 of $51,800 was achieved for the fleet. The TFDE adjusted TCE1 for the quarter was $54,100.
Utilization at 77%, down on the 80% achieved in Q3 2020 and the 90% realized in Q4 2019.
Inclusive of days covered by loss of hire insurance, Q4 2020 adjusted utilization was 82%.
Revenue backlog1 of $193 million as at December 31, 2020.
Approximately 77% of 2021 available days covered by charter contracts.
Downside risk, particularly through seasonally weak spring and summer months materially reduced through charters that secure increased utilization and fixed rate coverage.

Golar and Stonepeak Infrastructure Partners entered into a merger agreement for the proposed sale of 100% of Hygo to NFE.
Pursuant to the transaction, Golar will receive 18.6 million NFE Class A shares and $50 million in cash for its 50% shareholding in Hygo.
The transaction represents a Hygo common equity value of approximately $2 billion, in line with contemplated Hygo IPO valuation expectations.
Completion of the transaction is subject to the receipt of certain approvals and third-party consents and the satisfaction of other customary closing conditions.
After completion, Golar will have a ~9% shareholding in NFE, a larger and more diversified LNG downstream business with significant growth prospects, spurred by a strong business pipeline and access to attractive financing.

We expect the Q1 2021 fleet TCE to be around $60,000 per day, with utilization of around 90% based on fixtures to date and prevailing spot market conditions. Despite the record spot rates recorded by the market in January, Golar’s shipping strategy will continue to prioritize longer term utilization over short-term opportunities. Approximately 77% of 2021 available days are now covered. We do retain some exposure to seasonal and other potential upside by virtue of some index linked charters and spot availability within our shipping portfolio.

We will continue to focus on Hilli Episeyo operations and will pursue our dialogue with Perenco and SNH on potential solutions to prove up more reserves and increase throughput of the vessel. A conditional agreement with Perenco has been entered into that may allow for a drilling campaign to commence within Q1 2021. If drilling were to commence before the end of Q1 2021, additional throughput could commence in 2022. With Brent oil prices having recently exceeded $60, additional Brent linked operating cashflow can also be expected under the terms of the current contract.

On Gimi, our project focus is in Singapore on conversion productivity whilst complying with safe working under COVID-19 restrictions. The project remains on schedule, on budget and the 5th dry dock is on track to commence in Q1 2021.

We will continue to work with development opportunities for new FLNG projects utilizing both Mk I conversion and Mk III new build technologies. Smaller capacity solutions based on modular production technology that offer the prospect of a significantly shorter lead time to first production will also be explored further.

Following the re-emergence of strong returns in the upstream segment Golar will revisit opportunities to use its unique FLNG technology and operational experience to increase its potential upstream exposure. This can be achieved by virtue of the current Hilli oil price kicker or by more direct exposure. The target remains to capture more of the spread between well and wire and the strategy is in line with that articulated when OneLNG was established with Schlumberger in 2016. The collapse in oil and gas prices at that time caused Golar to focus on the build out of its downstream business which has now been successfully established following the proposed merger with NFE.

The entry into merger agreements resulting in the eventual sales of Hygo and Golar Partners to NFE represent significant steps toward simplifying the group structure, crystallizing value and strengthening the balance sheet. With $128 million of unrestricted cash on hand as at December 31, 2020, a further $37 million released from the sale of the LNG Croatia in Q1 2021 and $131 million of cash proceeds expected upon closing of the proposed sales of Hygo and Golar Partners, Golar’s balance sheet will be significantly strengthened. Together with the 18.6 million NFE shares with a market value of $910 million as of February 24, 2021, Golar is now well-positioned to refinance the 2022 maturing convertible bond, complete all project CAPEX obligations, and target attractive growth prospects. The Golar Board does not intend to create a long-term holding company of other publicly traded entities. The Board will therefore focus on solutions that give shareholders direct exposure to the underlying assets and thereby minimize any holding company discounts.

In order to capture the significant discount to book value/underlying value, Golar will also explore opportunities to separate the FLNG business. With a unique fast-track, low cost technical LNG production platform, $3.4 billion (Golar share) in contract earnings backlog1, and attractive growth prospects, the Board is of the opinion that there is also significant hidden value in this business segment.

Supported by increased financial flexibility following the proposed NFE transactions and a continuing disparity between the share price and the underlying value of the business, the Board has approved a share buyback program of up to $50 million of the Company’s common stock. After expiry of the 90 day lock-up period for the NFE Class A shares to be received upon consummation of the merger agreement for the proposed sale of Hygo, the Board will revert with a plan for how the value of this investment can best be transferred to Golar shareholders, either directly and or indirectly. The Board of Golar sees significant strategic upside in the NFE business, particularly as the company has taken a leading role in the global downstream distribution of LNG, supported by strong long-term cash flow contracts.

Driven by a stronger performance of the shipping fleet and consistent operations from FLNG Hilli Episeyo, Golar’s expects a solid improvement in Q1 results relative to Q4. Influenced by a potential $773 million illustrative gain on disposals1 of Hygo and Golar Partners to NFE, results for 1H 2021 are also expected to be materially ahead of prior periods. 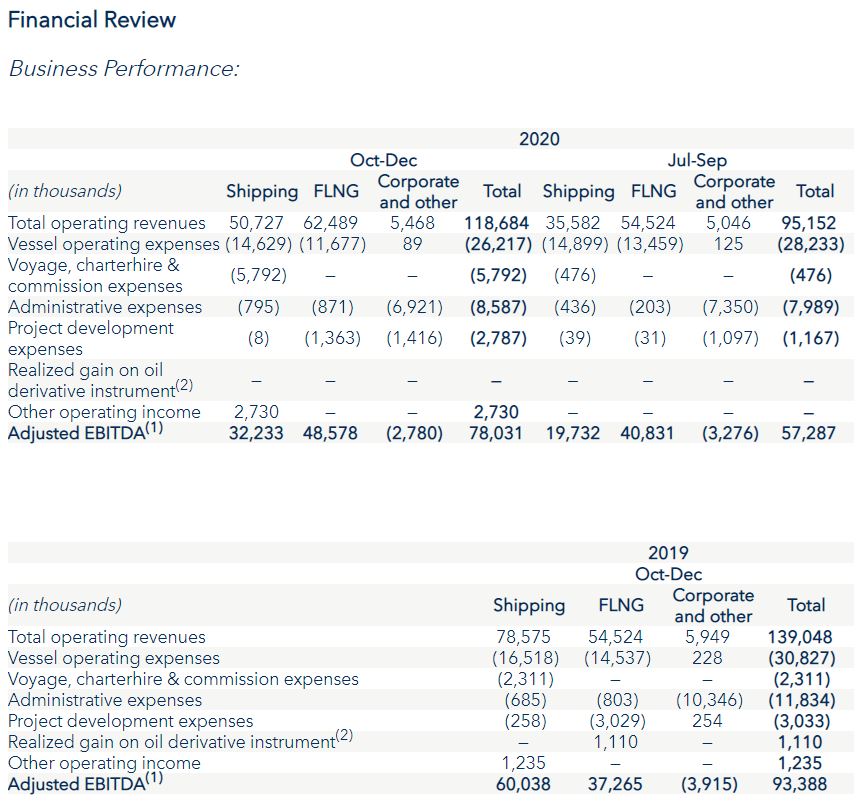 (2) The line item “Realized and unrealized gain /(loss) on oil derivative instrument” in the Condensed Consolidated Statements of Income/(Loss) relating to income from the FLNG Hilli Episeyo Liquefaction Tolling Agreement is split into, “Realized gain on oil derivative instrument” and “Unrealized loss on oil derivative instrument”. The unrealized component represents a mark-to-market loss of $5.7 million (September 30, 2020: $0.2 million gain and December 31, 2019: $4.3 million) on the oil embedded derivative, which represents the estimate of expected receipts under the remainder of the Brent oil linked clause of the Hilli Episeyo Liquefaction Tolling Agreement. The realized component amounts to $nil (September 30, 2020: $nil and December 31, 2019: $1.1 million) and represents the income in relation to the Hilli Episeyo Liquefaction Tolling Agreement receivable in cash.

To align our reportable segments and more clearly show the performance of shipping as a standalone business, Golar has separated other operations which include management and administrative services and labelled this segment “Corporate and other”.

Revenue from shipping, net of voyage, charterhire and commission expenses was $44.9 million and increased by $9.8 million from $35.1 million in Q3. The quarter began with quoted TFDE1 carrier headline spot rates at around $59,000 per day and ended with rates at around $160,000 per day. The earlier commitment of a significant portion of the fleet to term contracts in accordance with a utilization focused strategy, a cap on the rate receivable for some of the index linked charters and a mechanical issue with one of the remaining spot vessels limited Golar’s exposure to the higher spot rates observed later in the quarter. Full fleet TCE1 earnings increased from $39,100 in Q3 2020 to $48,800 in Q4 2020 but decreased relative to the $77,000 achieved in Q4 2019. Inclusive of loss of hire income receivable, Golar’s Q4 Adjusted TCE1 was $51,800, in line with prior guidance.

Operating revenues from FLNG Hilli Episeyo, including base tolling fees and amortization of pre-acceptance amounts recognized, increased from $54.5 million in Q3 to $62.5 million in Q4. Billing for 2019 and 2020 overproduction of $5.1 million and $2.9 million respectively, accounts for the increase in Q4.

A loss of hire claim in respect of the aforementioned mechanical failure on board one of the carriers accounts for the $2.7 million other operating income in Q4.

Having completed the conversion and sale of the FSRU LNG Croatia (formerly Golar Viking) to LNG Hrvatska on December 23, a gain on sale of $5.7 million was recognized in other non-operating income.

Depreciation and amortization, at $26.8 million was in line with the prior quarter.