Goldman, Barclays See ‘As Good As it Gets’ 4% Global Growth

It’s looking like boom time in the world economy again.

As more economists publish their 2018 outlooks, those from Goldman Sachs Group Inc. and Barclays Plc are proving the most bullish in predicting global growth will reach 4 percent next year. That would be the strongest since 2011 and up from the 3.7 percent that Goldman Sachs estimates for this year.

“The ongoing economic expansion has substantial momentum,’’ Barclays economists Ajay Rajadhyaksha and Michael Gavin wrote in a Nov. 16 report. “It is not overly reliant on any single geographical region, industry, or source of demand. It does not seem to have generated economic or financial excesses that pose an immediate threat.’’ 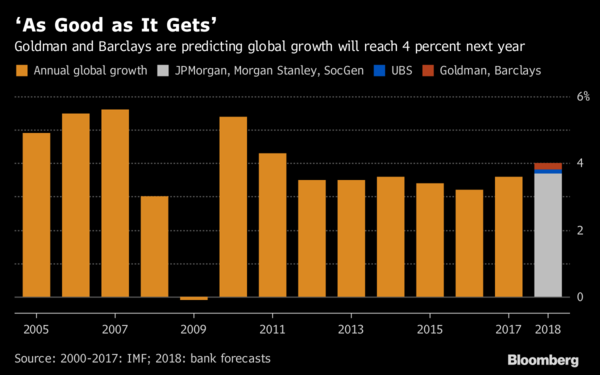 At Goldman Sachs, economists led by Jan Hatzius suggest the outlook is as “good as it gets” after a year in which growth in the Group of Seven economies is poised to beat that projected by the Bloomberg survey of forecasters for the first time since 2010. Most major economies are even running ahead of their pre-financial crisis average, Hatzius’s team said in a Nov. 5 report.

Despite the acceleration in growth, few economists see a surge in inflation, preferring instead to predict a gradual acceleration in price pressures that would be welcomed by central bankers. Goldman Sachs is more aggressive than most in forecasting the Federal Reserve will raise its key interest rate four times next year.

The Organization for Economic Cooperation and Development warned on Tuesday investors against showing excessive exuberance. Even as it forecast world output will grow 3.7 percent next year, it said asset prices have gotten too high and a reversal could put the expansion at risk.

Here’s what other major banks are saying about the world economic outlook and their forecasts for global growth in 2018:

“The global recovery is likely to gain momentum and breadth in 2018, supported by still accommodative monetary policy and more fiscal stimulus. With major economies at different stages of the business cycle, the risk of the global economy running too hot is limited though.’’

“Our 2018 global economic outlook is mostly characterized by a continuation of recent developments –- higher growth, steady inflation and rising advanced economy policy rates. The global economy continues to pick up steam and global growth continues to exceed forecasts. We expect yet another pickup in global growth in 2018 and further broadening across countries and sectors. But we suspect that the upside risk to growth is now relatively limited.”

“As far as gross domestic product growth is concerned, the global economy is arguably in the best shape in about a decade. The good shape of the global economy is also reflected in the high degree of synchronization of growth with the OECD, for example, predicting positive growth rates in every one of the 45 individual economies it covers for the first time since 2007. In this sense, at least as far as output and employment growth is concerned, it is a Goldilocks scenario, with no sign of overheating in any of the economies we cover.”

“The global recovery is broad-based by number, but much of the improvement is owed to a handful of commodity producers. The biggest upside risks to our forecast are a larger-than-expected tax cut in the U.S. and abating policy uncertainty on both sides of the Atlantic leading to a much stronger investment response.”
Source: Bloomberg