Government of PNG under fire to review ICTSI port contracts

This week the Government of Papua New Guinea has been the target of global protests calling on the government to review the decision to award port operations in Lae and Port Moresby to Philippine port operator, International Container Terminal Services Inc. (ICTSI). The campaign has seen protests outside of the PNG Consulate in Sydney, Australia, and High Commission in Wellington, New Zealand.

Paddy Crumlin, President of the International Transport Workers’ Federation today urged the Government of PNG to act in the best interests of its people by standing with workers, landowners and communities exposed to ICTSI’s poor record on safety and labour relations.

“The ITF, alongside the Maritime International Federation, is calling on the Minister of Transport, Hon. Wesley Nukundj, to intervene and urgently convene a meeting of stakeholders – including union and landowner representatives – to find a solution to the current crisis,” Crumlin said.

Over the past month, embattled global port operator ICTSI has been the target of international condemnation over emerging patterns of labour violations their network, poor safety standards, and insufficient managerial oversight to ensure productive industrial relations, and compliance with local laws and international labour conventions.

“The decision to award contracts at PNG’s two biggest ports to ICTSI will have a profound impact. The Papua New Guinea Maritime and Transport Workers Union, an affiliate of the ITF, says that more than 1,000 jobs will be lost at the ports and in associated industries due to the contracts awarded to ICTSI. 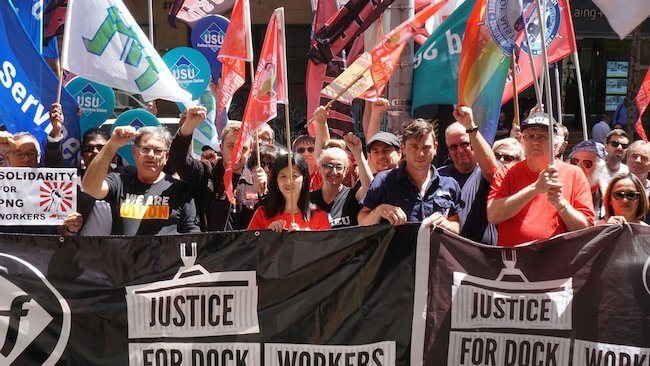 “The number of family and community members who rely on those jobs numbers is in the thousands. We believe ICTSI intends to replace workers with a mixture of casual, outsourced labour and Filipino workers under the guise of mentors. This is nothing short of a disgrace.”

Joe Fleetwood, General Secretary of the Maritime Union of New Zealand, also called on the Government of PNG to act: “The PNG government must put its workers’ interests first, and protect the jobs of its people. We stand ready to continue our support for the PNG workers and landowners in their just fight.”

There are significant concerns about how the entry of ICTSI into the PNG port sector will impact on landowner groups, the county’s domestic coastal shipping network and local communities. The 25-year contract will see landowners lose their shareholding, without any compensation.

“Both the Government of PNG and ICTSI need to answer some serious, unanswered questions. The recognition of landowners’ cultural and historic connection with their land, compensation for their investment in the ports, and their ongoing participation in the port operations remain a mystery. And the impact of ICTSI’s entry on the viability of PNG’s domestic coastal shipping network and implications that ICTSI’s predatory pricing structures will have on the costs of goods in the country need to be addressed,” added Crumlin.