Petrofin Research© presents, for the 21 st year running, an overview and an in-depth analysis of the bank loan portfolios to Greek shipping, as of 31 st December 2021.

Greek banks showed the highest growth among the 3 bank groups with 14.2% increase in portfolio.

All three bank groups show growth, with Greek banks marking a significant rise of 14.2%. The upward trend continues uninterrupted since 2017.

International banks WITH a Greek presence marked a small growth of 3% reversing the significant drop of 19% in 2020.

The International Banks WITHOUT a Greek presence marked a small growth of 2.84% stabilising last year’s fall.

The number of banks involved in Greek shipfinance has remained the same at 56. 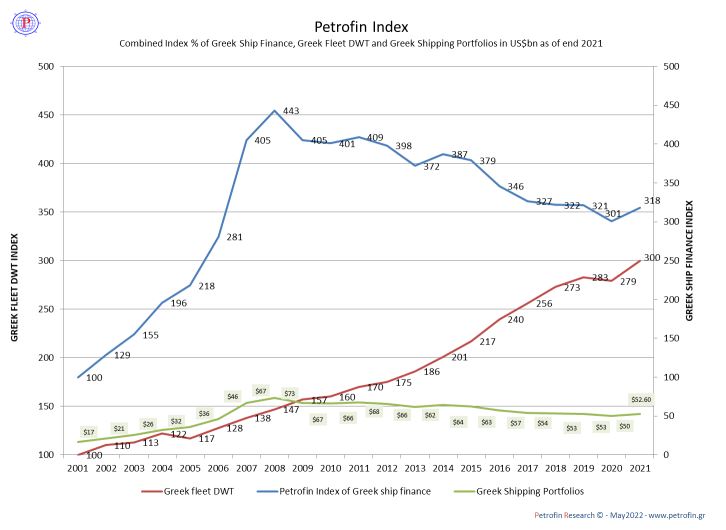 The Lead Managers are down slightly down by 5.29%.

Forward commitments to newbuildings have also increased by 12.92%, continuing a strong momentum which started in 2019, despite the slowdown in Greek shipbuilding orders.

The decline of Greek shipfinance bank lending reflects the challenging regulatory and operating environment by banks, primarily in Europe. In contrast, Far East lenders and leasing companies operated under more supportive conditions. Greek banks are the exception, as a result of their commitment, Greece’s improved S&P and Moody’s rating, a lower cost of funding, attractive clientele and supportive ancillary business returns, as well as robust loan portfolios.

The underlying factors behind the growth may be attributed in part to the gradual economic recovery from the pandemic, an improvement in international trade and in most shipping sectors and a general positive outlook for the global economy. In addition, banks were able to refocus on ship finance as a potentially profitable sector for lending, encouraged by the industry’s robust performance during the pandemic.

We should also note that 2021 was a year in which no major shipping bank withdrew from ship lending, which allowed Greek shipping finance to grow and for European banks to stop their long slide over the last decade. Whilst regulatory restrictions linked to capital adequacy remained, most banks had made the necessary adjustments and developed an increased loan activity, which was shared by ship finance.

The most notable feature in 2021 was the rapid growth for yet another year by Greek banks, which remained focused on Greek shipping as their core business and area where they can exploit their ‘home’ advantage via their clientele and use of auxiliary non lending business. Greek banks were able to strengthen their balance sheets via growth and the disposal of non-performing loans. The above, coupled with a recovery in Greece’s credit standing, enabled banks to not only be more competitive but to also find room for growth.

The increased by 12.92% forward commitments at the end of 2021 is indicative of a positive momentum. It should be said further that ship lending volumes increased strongly as the year progressed. In addition, during the course of 2021, with container and dry bulk prospering, Greek owners were able to secure period charters that enabled banks to provide higher levels of finance of 60% plus with a front loading repayment profile. Chinese leasing and alternative forms of finance also grew in 2021 / 2022, as owners were able to source finance from across all loan providers. Far East bank lending took a breather in 2021, as most leasing companies linked to Far Eastern banks preferred leasing to bank finance, as leasing offered greater flexibility to Greek owners
Source: Petrofin Research