The main story for 2018/19 has been the positive developments in the large LNG sector, which we are expecting to continue throughout the rest of 2019 into 2020. This is being driven by increasing demand as more countries prioritise LNG as an energy source, replacing oil and coal, combined with increasing supply as more projects continue to come online.

China is at the forefront of this growth and is emerging as the largest source of new LNG demand growth and second largest importer of LNG. China’s natural gas consumption has surged amid a gasification programme and plan that is shifting millions of households and a large number of factories to natural gas from coal.

Greece and Japan dominate in terms of USD value. Greece has recently overtaken Japan as the top owning country, ordering a large number of vessels since 2018.

However, we have seen China emerge in the LNG market owning a total of USD 5.9 billion of Large LNG assets, which equates to about 13% of the top 5 owning countries, as shown below. 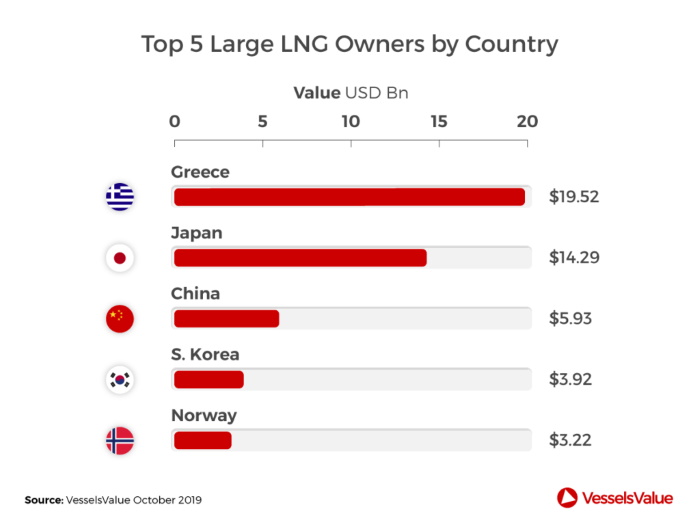 China currently owns a total of 45 vessels with over half of them being younger than 2 years old (including NB) so alongside the Greeks, they own a young fleet benefiting in the future market.
ICBC own the highest value of the fleet with their 10 vessels totaling a VV value of over USD 1.7bn 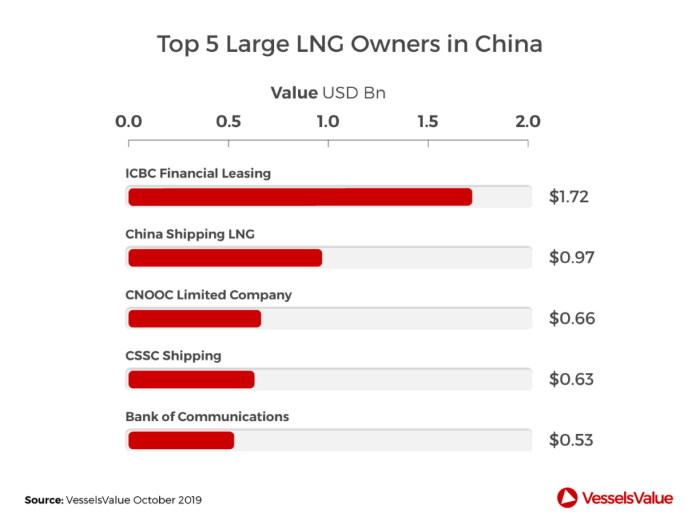 Historically South Korea has always been the favourable country to build LNG vessels at and with the mega merger of HHI and DSME, China began to feel the pressure. However, a shift is occurring, the Gas market is starting to invest more money into Chinese yards, out of the 127 vessels due to go online in the next 3 years, 17% will be built at a Chinese yard, 75% South Korea and the rest Japan. China are starting to directly compete with S.Korea for these high net assets and over the next few years we expect the Chinese to increase competition with South Korea / Japan and the number of Gas newbuilds in Chinese yards to increase dramatically. The Chinese yard Hudong Zhonghua has benefited from the recent positive developments in the large LNG sector with orders placed by CSSC, CNOOC, MOL and China Shipping over the past few years. Eight MOL and CSSC, 174k CBM vessels, delivery between 2020 and 2021 are currently being constructed in this yard with a total VV value of USD 1.4 billion.

Using the VesselsValue Trade module, importing countries and specific trade routes can be analysed. Since the beginning of the year China, the world’s second largest LNG importer has taken in 82.3 million Cargo Tons (CBM).

The below table demonstrates Top 5 LNG Importing Countries in order of Cargo Mile. Since the beginning of 2019 to 3rd Oct 2019.

Australia to China trade has risen by 16% YTD compared to 2018 YTD with the biggest import growth at the Tianjin LNG terminal.

Cargo Miles to Tianjin have doubled between 2018 and 2019 which has also let to a double in cargo quantity into the port. This increase is due to the expansion of the terminal and demand for natural gas in the region.

China is making the move in the LNG market and taking advantage of the sector development. China’s gas power plan is transitioning from the conventional energy sources such as Oil and Coal into LNG. Natural gas market shares in the countries total energy mix are increasing from the current 6% to 10% by end of 2020 and to 15% by 2030. The countries strategic plans aim to continue investment in LNG assets, increase domestic yard production to compete with S.Korea and become a leader LNG terminal investments. A potential change in LNG market dynamics looks to be occurring and the next few years for will be an interesting time for both China and the LNG sector as a whole.

All this positivity comes at a time when GasLog are marketing for sale their 9YO Large LNG GasLog Savannah. This is a rare sale and it will be interesting to see what price she achieves. Expectations are around USD 120 mil against a VV valuation USD 115 mil.
Source: VesselsValue

Previous: BIMCO: Shipping industry more hurt by developments in soya bean trades this year than last. Tonne mile demand down by 8.5%
Next: Demolition Activity Should Pick Up For Rates to Recover in the Long-Term