Global Shipping Outlook
The pace of global economic activity remained weak throughout 2019, with declining momentum in manufacturing activity and rising trade and geopolitical tensions, especially between the United States of America (U.S.) and China. Uncertainty about the future of global trading system and international co-operation more generally has had an impact on business confidence, investment decisions and global trade1, with trade volumes increasing by a marginal 0.3% in 20192. Projections for trade volume growth in 2020, prior to the new coronavirus (COVID-19) outbreak, hovered around 2.7%3, denoting a fragile recovery anyway. The unprecedented global crisis that was brought about by the coronavirus pandemic has made the outlook for the global economy and international seaborne trade for 2020 even more precarious and gloomy. For example, the World Trade Organization (WTO) forecasts4 that the world trade is expected to fall by between 13% and 32% in 2020.

Financially, many shipping sectors have been faced with a sudden and steep drop in demand, which in turn has considerably affected freight rates and earnings. In the dry bulk segment, for example, average daily earnings between January and April 2020, compared to 2019, were more than 85% lower for capesizes, 40% lower for Panamaxes and 35% lower for Supramaxes5. Though these rates could recover somewhat as Chinese factories come back online, the looming global recession and accompanying drop in global demand resulting from the lockdowns in Europe and North America have severely impacted on demand for shipping services.

The lockdown in Europe and North America will have considerable knock-on effects on employment rates, too. The International Monetary Fund (IMF) has declared that the COVID-19 pandemic will likely push the global economy into its worst recession since the Great Depression6, warning that prospects over a global rebound are highly uncertain. The recession in shipping is projected to last more than a year and shipping activity is not expected to improve in the following few months. This is also because, with shipping being a global industry, much of its activity takes place in the southern hemisphere, where major exporting countries of raw materials, such as Brazil, have only recently started being hit by COVID-19 as hard, if not harder.

The Greek-Owned Fleet
The top five shipowning nations include Greece, Japan, China, Singapore and Hong Kong. These five countries account for more than 50% of the world’s tonnage. In recent years Germany, Japan and the Republic of Korea have been losing ground, while Greece, Singapore, China and Hong Kong have increased the size of their fleet7.
Greece remains the world’s largest shipowning nation. Though the country accounts for only 0.16% of the world’s population, Greek shipowners own 20.67% of global tonnage8 and 54.28% of the European Union (EU)-controlled tonnage (Figure 1)9. Between 2007 and 2019, Greek shipowners have more than doubled the carrying capacity of their fleet (Figure 2)10, while they control (Figure 3)11:
• 32.64% of the world tanker fleet, 15.14% of the world chemical and products tankers and 16.33% of the global LNG / LPG fleet,
• 21.7% of the world bulk carriers, and
• 8.92% of the world container vessels. 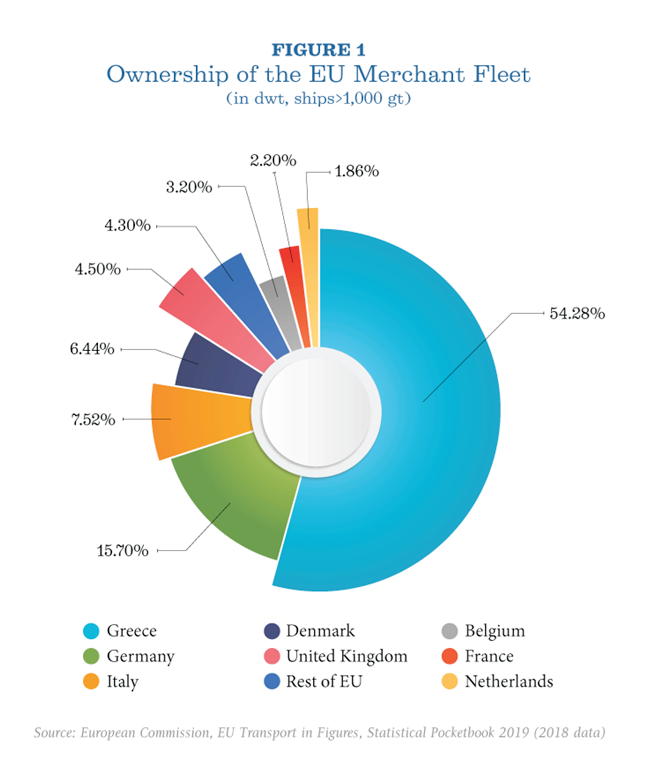 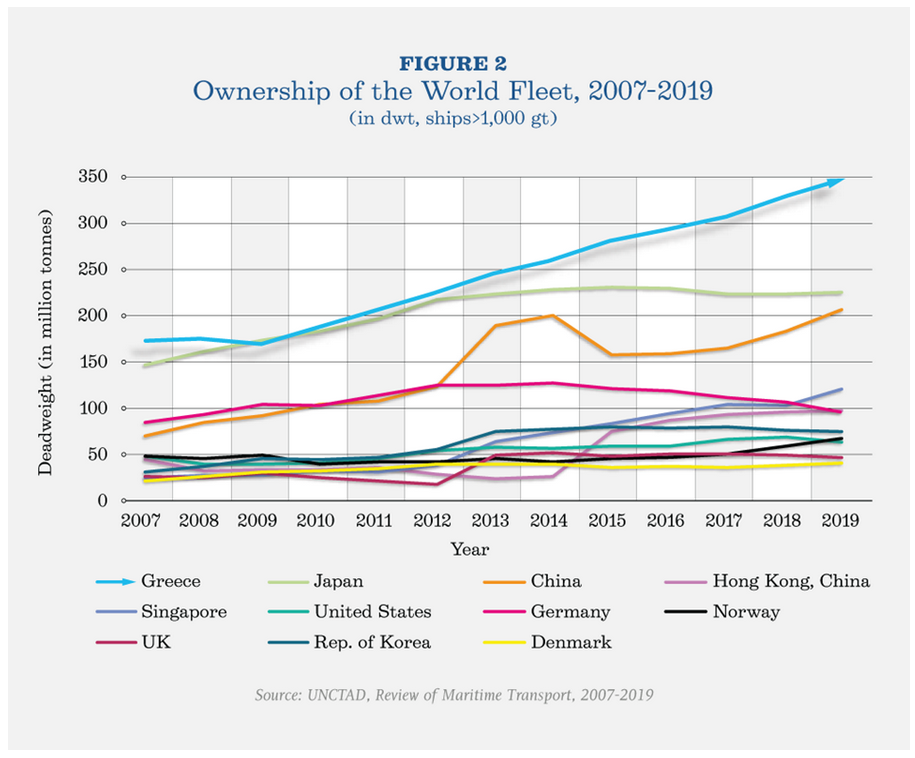 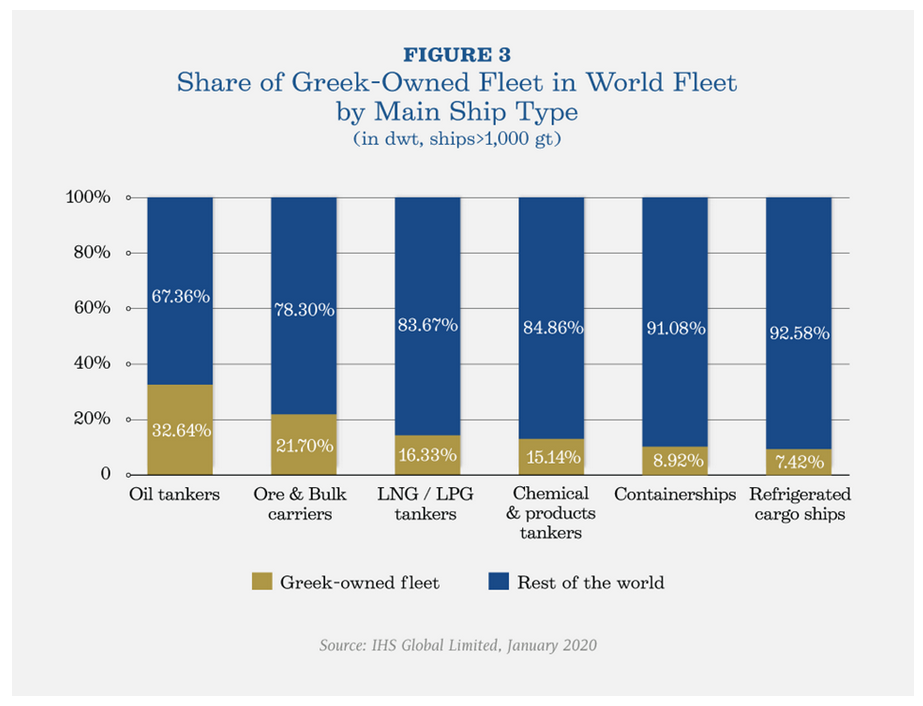 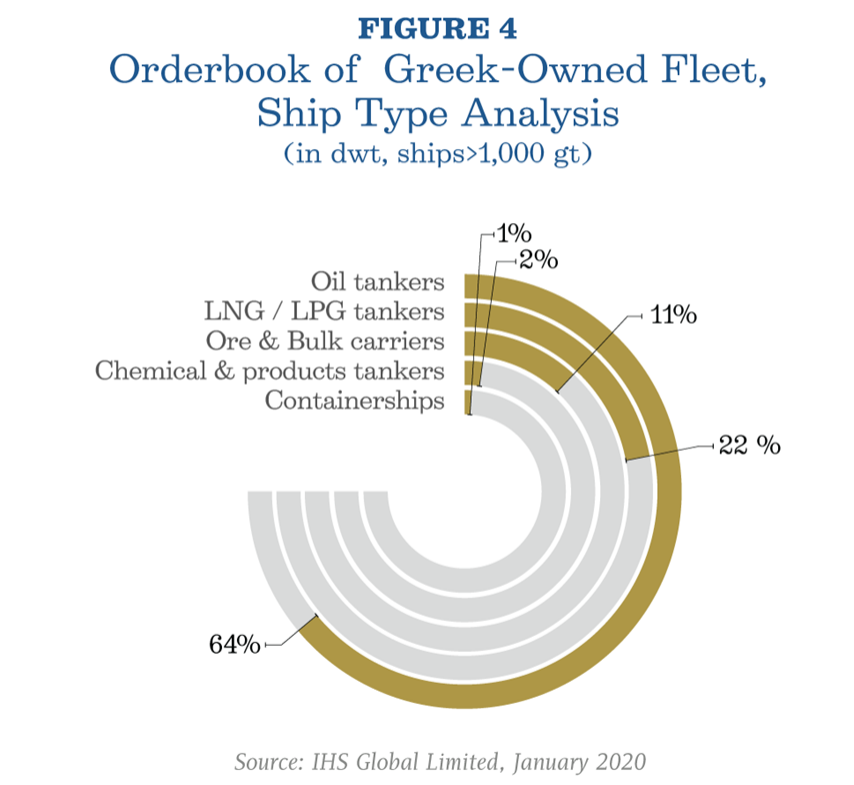 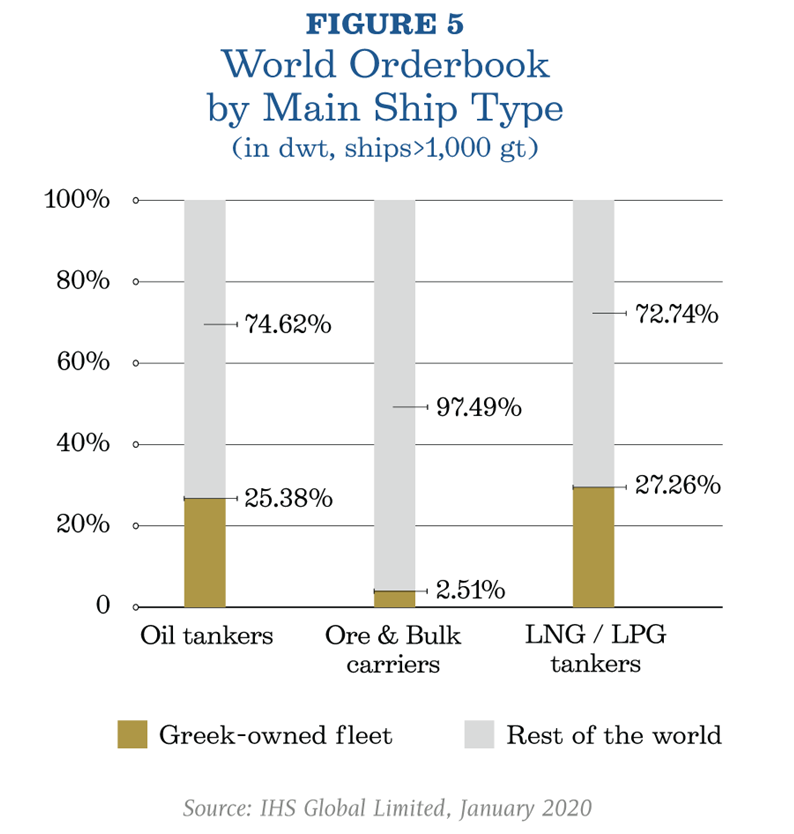 In fact, 28.61% of the Greek-owned fleet under EU flags was built after 2013 and according to the global standard of the Energy Efficiency Design Index – EEDI (MARPOL, Annex VI, Reg. 21), which guarantees better energy efficiency15. The corresponding percentage for the EU- flagged fleet is 21% and 23.2% for the world fleet. Additionally, the average size of Greek-owned vessels at 81,118 dwt is almost double than the average vessel size of the world fleet which is 43,766 dwt16. Economies of scale improve efficiency and environmental gains, thereby reducing even further the carbon footprint of Greek shipping. 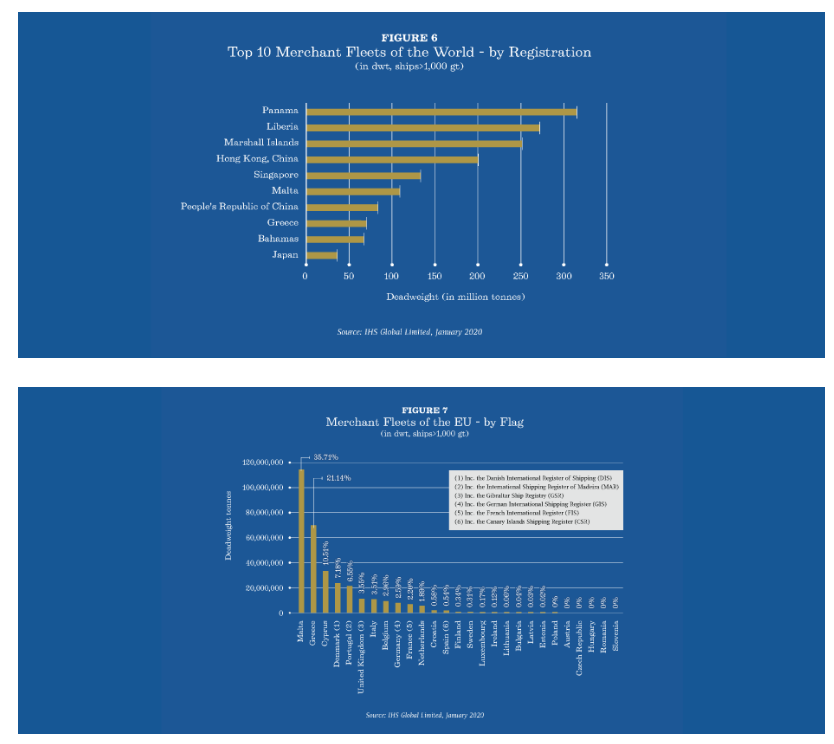 Greece remains on the UN IMO “List of confirmed Standards of Training, Certification and Watchkeeping for Seafarers (STCW) Parties” and on the White Lists of the Paris and the Tokyo Memorandum of Understanding, while it is one of the safest fleets worldwide with 0.96% of the Greek merchant fleet (based on number of ships) and 0.37% of the fleet (based on tonnage) being involved in minor accidents17. The Greek Register numbers 706 vessels (over 1,000 gt) amounting to 39.19 million gt. The Greek-flagged fleet ranks 8th internationally (Figure 6) and 2nd in the EU (in terms of dwt) (Figure 7)18. 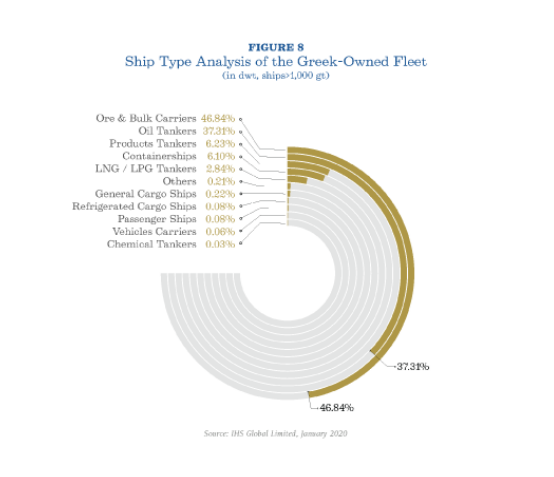 Greek shipping is one of the cornerstones of the global economy and a major facilitator of global trade, while constituting a pillar of the Greek economy. Greek shipowners are primarily involved in bulk / tramp shipping (Figure 8), which is an example of a sector with characteristics of perfect competition. Comprising mostly small and medium- sized, privately-owned / family businesses, Greek shipping is very flexible and adaptable to changing economic environments and trade flows. It mainly carries staples that are essential for the EU and global economies, including agricultural and forest products, oil and oil products, gas, chemical products, iron and other ores, coal and fertilizers. Importantly, the Greek-owned fleet is the world’s largest cross-trading fleet, with more than 98% of its trading capacity carrying cargoes between third countries19.

Greek shipping is also of strategic importance to the EU, as both its economy and the welfare of its citizens rely on access to affordable energy. Importing 88% of its crude oil needs, 74% of its natural gas needs and 44% of its solid fossil fuels needs20, the EU heavily relies on maritime transport. With energy security concerns on the rise, Greek shipping plays a crucial role in securing the EU’s diverse energy imports from remote regions of the world. Its strategic importance is also evidenced by the fact that the EU relies on international shipping for approximately 76% of its external trade21.

Greek shipping remains one of the pillars of the Greek economy. The receipts in the country’s Services Balance of Payments from maritime transport amounted to approximately €17,303 million for the fiscal year of 2019, which represents a 4.05% year-on-year growth (Figure 9)22. 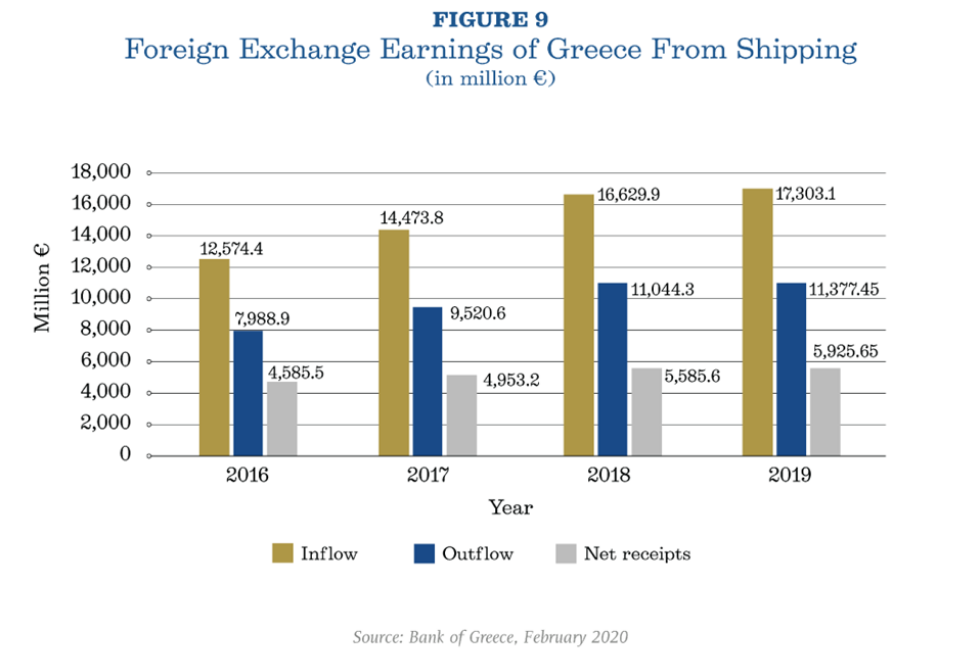 Greek shipping is one of the cornerstones of the world economy and an important factor in conducting world trade, while at the same time it is a pillar of the Greek economy. Greek shipowners are primarily active in bulk / tramp shipping (Figure: 8), which is a model sector with characteristics of perfect competition. Greek shipping, which consists mainly of small and medium-sized private / family businesses, shows flexibility and adaptability to changing economic conditions and trade flows. It mainly carries products that are essential for the EU and other global economies, including agricultural and forestry products, oil and oil derivatives, liquefied gases, chemicals, iron and other ores, coal and fertilizers. It is noteworthy that the Greek-owned fleet is the largest merchant fleet in the world, with a percentage of over 98% of its capacity to be active in cross-trading 19.

However, the industry’s contribution to the Greek economy is far broader than its input to the Services Balance of Payments. Greek shipping is at the heart of a thriving maritime cluster that generates investments and employment opportunities in the country. A recent study concludes that the total contribution of the Greek shipping industry in the country, including indirect and induced effects, exceeded € 11 billion in 2019 accounting for 6.6% of the Gross Domestic Product (GDP) 23. Its total contribution in terms of jobs created or sustained in Greece, including indirect and induced employment, surpasses 3% of total Greek employment. Greek shipping, by its size and characteristics, also sets Greece apart as lynchpin of the multilateral trading system, despite the country’s relatively modest size. It is an essential and strategic partner of major trading nations: approximately 22% and 20% of the fleet’s activity serves the U.S. and European trade respectively, while the largest share, approximately 32%, serves the fast-growing Asian economies24.

In addition to all the above, Greek shipowners have been very actively engaging in social welfare initiatives while the Union of Greek Shipowners (UGS) is the only industry group in Greece that has developed its own social welfare company, i.e. SYN-ENOSIS.