Industry-leading data and communications solutions company GTMaritime has won the Smart4Sea Award 2019 for Cyber Security, after a public vote recognised GTMailPlus as the product making the most noteworthy contribution to cyber security in shipping this year.

The prestigious award goes to the organization demonstrating a significant achievement, breakthrough or contribution to any aspect of cyber security. GTMailPlus includes a host of security applications as standard, including Advanced Threat Protection, Anti-Phishing and Continuity to guard against the ever-increasing threat from cyberattack faced by ships at sea. 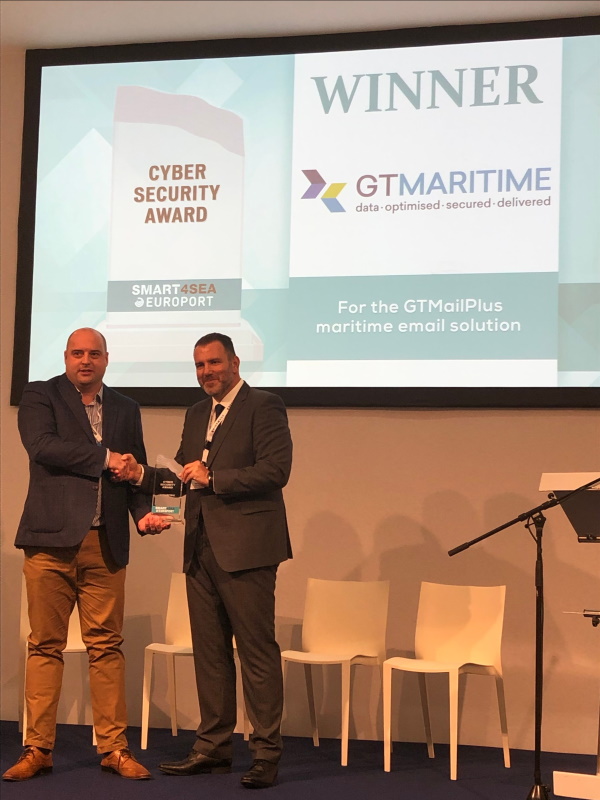 Collecting the award at a ceremony during Europort 2019 in Rotterdam, GTMaritime Head of Operations Jamie Jones said: “It is known that as many as 72% of shipowners have been victims of a cyber-related incident in the last 12 months and cyber threats can have very real consequences – extortion and financial loss being in some respects the least damaging outcome. Modern ships depend on computers more and more for safe operation.”

He adds: “We are immensely proud of this recognition, which really goes to our team of developers and other staff who strive every day to stay one step ahead of hackers.”

In the last six months, GTMaritime services have stopped more than 59,500 malware attacks which were unknown to standard antivirus services and halted more than 68,000 known viruses in their tracks. They have also prevented more than 200,000 spam messages clogging up onboard inboxes

With over 20 years of maritime communications experience, the GTMaritime products used to safeguard onboard systems from malicious code are on board some 5,600+ vessels, amounting to nearly one in ten vessels in the global merchant fleet. Many shipowners have been encouraged to act by IMO’s decision to bring cyber-security under the remit of the ISM code from 2021.
Source: GT Maritime