GTT, the technological expert in membrane containment systems used to transport and store liquefied gases, today announces its results for the first half of 2022.

Commenting on the results, Philippe Berterottière, Chairman and CEO of GTT, said: “With 88 orders for LNG carriers, our core business sales performance for the first half of 2022 beats our record for the whole of 2021, highlighting particularly strong momentum. Furthermore, the final investment decisions on new liquefaction plants taken in the second quarter, the expected ramp-up of LNG carrier orders from Qatar and increasing demand for LNG in Europe have confirmed the need for infrastructure and LNG carriers in the years to come.

The first half is also promising for LNG as fuel, with 38 orders already placed, well above last year’s level. In addition, the growing number of mid-sized container ships in our order book is evidence of our enlarged market share in this sector.

In order to meet the needs of the market, new shipyards have been marketing our technologies since the first half of the year.

GTT maintains a tireless focus on R&D to meet its customers’ energy transition needs and the increased requirements they face. During the first half, we obtained a number of approvals from classification bodies to develop new innovative technologies across a wide range of fields, notably for our future NEXT1 containment system and for designing a LH2 carrier as part of our partnership with Shell.

As regards 2022 targets, in the second quarter the Group noted some delays in shipbuilding schedules, resulting in a postponement of revenue recognition. These delays have various reasons: supply difficulties related to sanctions, lockdowns and social movements in Asia. Given these delays, we are confirming our annual targets, but we now expect to be in the lower half of the range announced in February.

Furthermore, work on projects in which the Group is involved in Russia is continuing in compliance with the applicable sanction regimes. However, given the increasing impact of international sanctions on LNG liquefaction projects in Russia, the continuation and proper execution of these contracts are exposed to risks of postponement or cancellation.

However, the crisis has highlighted the global scale of gas demand, the need for European countries to achieve energy independence in respect of Russia and, more specifically, the strategic importance of maritime transport of LNG, GTT’s core business.”

Following the record number of orders received in 2021 (27 vessels), GTT received 38 orders for LNG-powered vessels in the first half of 2022, confirming another record year in this segment. These orders were received from various Chinese and Korean shipyards on behalf of several major global ship-owners. Delivery of the vessels is scheduled between Q1 2024 and Q1 2026.

GTT has signed a contract with a major player in the liquefied gas transport industry for GTT Digital to equip 30 vessels with Smart Shipping solutions. The contract includes the installation and activation of sensors, automatic data collection systems and smart software to manage and optimise the vessels’ energy and environmental performance. It also provides for the regular intervention of GTT Digital experts to carry out customised data analysis and produce dedicated operational reporting.

Exclusive collaborative agreement with HIFraser Group to market and supply electrolysers in Australia and New Zealand for the production of green hydrogen. HIFraser will locally assemble the BOP[2] for Elogen’s electrolysers and adapt them to Australian standards and local customer requirements.
Collaboration agreement between Elogen and Valmax Technology Corporation for the supply of electrolysers in South Korea. Valmax will locally assemble the BOP2 for Elogen’s electrolysers and will work with local certification bodies, such as the Korea Gas Safety Corporation, in order to obtain approval and install the electrolysers.
Non-binding letter of intent with Charbone Hydrogen Corporation (Charbone) to enter into a long-term framework supply agreement no later than November 30, 2022. Under the terms of the agreement, Elogen will supply Charbone with PEM[3] electrolysers for a capacity of up to 100 megawatts over a four-year period (2023-2026) for Charbone’s green hydrogen projects in North America.
On July 15, 2022, Elogen’s “gigafactory” and R&D reinforcement project was selected by the European Commission to form part of the Hydrogen IPCEI[4]. As a reminder, the Elogen “gigafactory” will start production in 2025 with a production capacity of 1 GW.

Finally, in July, Elogen was selected by Symbio to supply an electrolyser with an initial capacity of 2.5 MW for Symbio’s new fuel cell plant. This new contract represents an important milestone for Elogen, as it highlights the company’s ability to deploy its technologies on multi-megawatt capacities for large industrial projects.

In 2021, for the third year in a row, GTT ranked first in the list of medium-sized companies filing patents published by the INPI. This ranking highlights GTT’s outstanding innovative momentum.

In the first half of 2022, GTT received numerous approvals from classification bodies:

• In March and April 2022, GTT received several approvals in principle in the field of LNG as fuel, including from Bureau Veritas for a new LNG conversion concept for very large container ships, from ClassNK for a new design of LNG fuel tank with 2 bar gauge pressure applicable to PCTC[5] vessels as well as LNG-powered cruise ships, and lastly from DNV for an innovative design for an LNG-powered PCTC vessel.

• In the second quarter, GTT received further approvals in principle, including from Lloyd’s Register for its future NEXT1 containment system and from Bureau Veritas for Shear-Water, a ballast-free vessel concept for LNG bunkering and refuelling vessels.

Regarding LNG as fuel, with the deliveries of two ultra-large container ships and orders for 38 container ships, the number of vessels in the order book stood at 68 units at June 30, 2022. 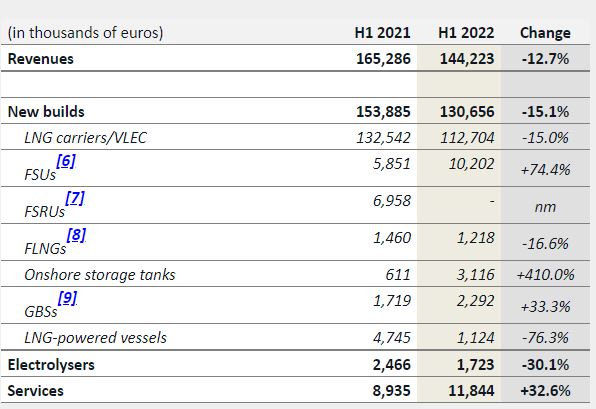 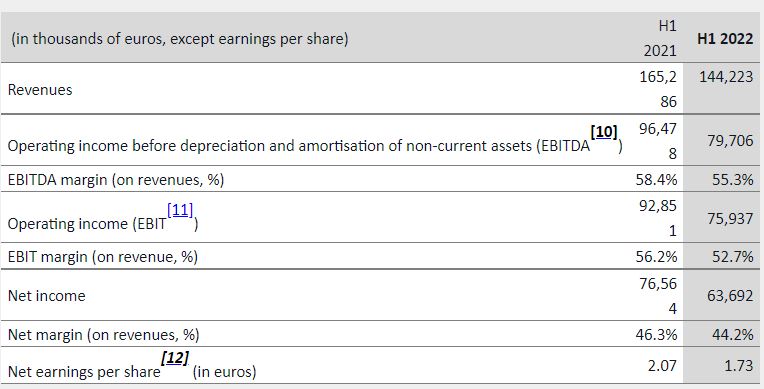 Work on projects in which the Group is involved in Russia is currently continuing in compliance with the applicable sanction regimes.

Given the increasing impact of international sanctions on LNG liquefaction projects in Russia, the continuation and successful execution of these contracts are exposed to risks of postponement or cancellation. In particular, the Group notes that sanctions are affecting Russian imports of certain products and equipment used in current projects, including the Zvezda project. Furthermore, GTT was notified in July by Saren B.V. of its intention to terminate the contract between them. In this context, GTT is investigating solutions to ensure the proper implementation and integrity of its technology, in strict compliance with applicable international sanctions.

As a reminder, other orders in progress in Asian shipyards for six ice-breaker LNG carriers and two FSUs[14] are specifically intended for Russian Arctic projects. To date, these projects are proceeding according to plan. At July 1, 2022, these orders represent for GTT a total of €38 million revenues to be recognised by 2023, including €17 million in 2022.

Finally, eight conventional LNG carriers ordered by international ship-owners, under construction in Asian shipyards, are intended for the Arctic LNG2 project, but can operate in all types of conditions.

In its 2021 annual results press release dated February 17, 2022, the Group issued the following targets for 2022, assuming no significant order deferrals or cancellations:

Given the first half delays in some shipbuilding schedules, the Group now expects these figures to reach the lower half of the ranges of revenues and EBITDA announced in February.

The crisis has also highlighted the global scale of gas demand, the need for European countries to achieve energy independence in respect of Russia and, more specifically, the strategic importance of maritime transport of LNG, GTT’s core business.

In the longer term, the Group should benefit from the current strong order momentum and expects to achieve significantly higher revenues and earnings from 2023 onwards versus 2022.

Interim dividend
On July 28, 2022, the Board of Directors decided on the distribution of an interim dividend of €1.55 per share for the 2022 financial year, to be paid in cash according to the following schedule:

First half 2022 results presentation
Philippe Berterottière, Chairman and Chief Executive Officer, and Virginie Aubagnac, Chief Financial Officer, will comment on GTT’s first half results and answer questions from the financial community during a webcast held, in English, on Friday, July 29, 2022, at 8:30 a.m. (Paris time).
Source: GTT