Gulf of Guinea records highest ever number of crew kidnapped in 2020, according to IMB’s annual piracy report

Incidents in the Gulf of Guinea are particularly dangerous as over 80% of attackers were armed with guns, according to the latest IMB figures. All three vessel hijackings and nine of the 11 vessels fired upon in 2020 related to this region. Crew kidnappings were reported in 25% of vessel attacks in the Gulf of Guinea – more than any other region in the world. Once kidnapped, crew are removed from their vessel and can be held on shore until their release is negotiated. The furthest crew kidnapping in 2020 occurred almost 200 nautical miles(NM) from land with the average kidnapping incident taking place over 60NM from land, according to IMB. The rise in kidnapping incidents further away from shorelines demonstrates the increasing capabilities of pirates in the Gulf of Guinea. Given these developments, IMB advises vessels in the region to remain at least 250 NM from the coast at all times, or until the vessel can transit to commence cargo operations at a berth or safe anchorage. 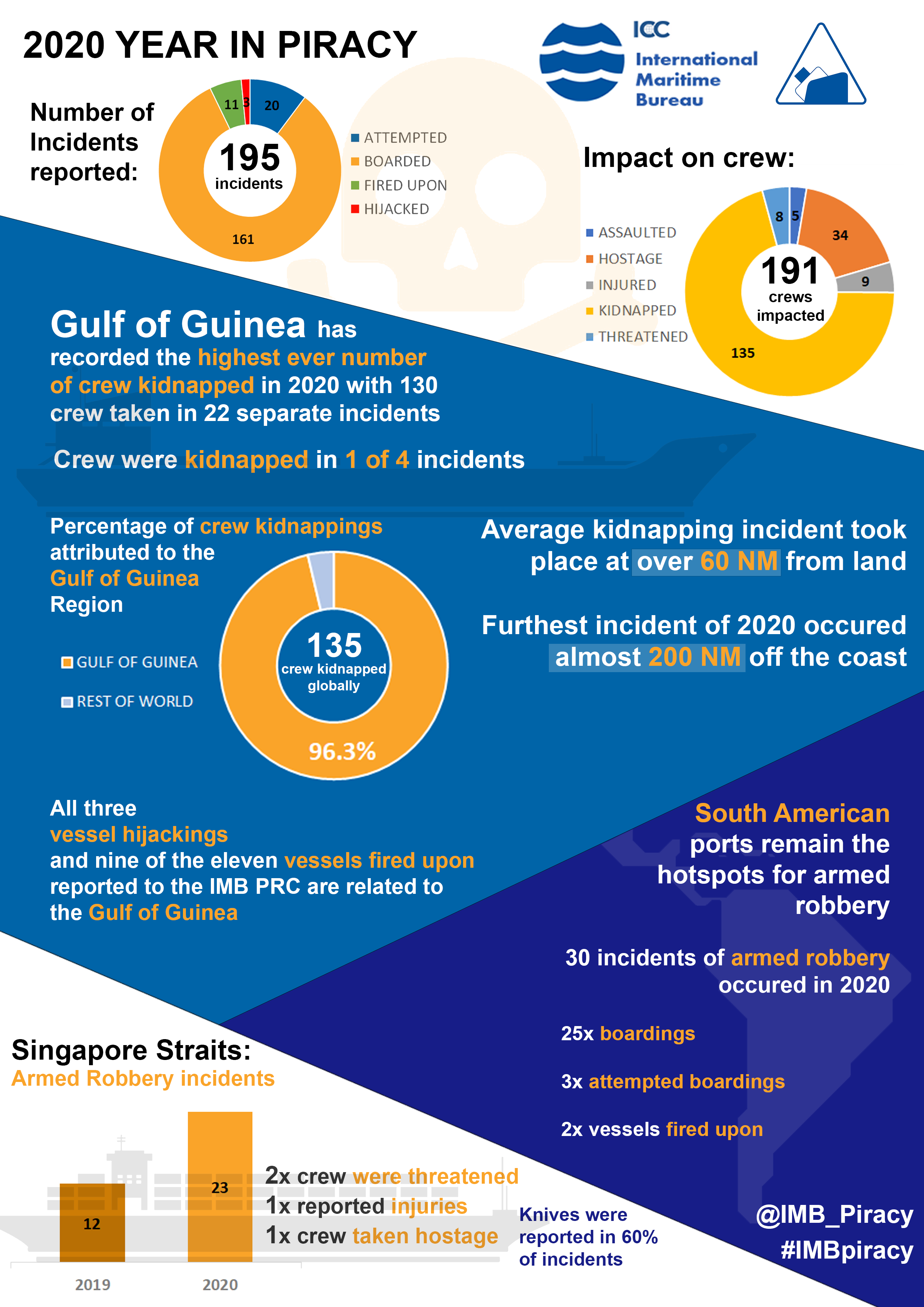 “The latest statistics confirm the increased capabilities of pirates in the Gulf of Guinea with more and more attacks taking place further from the coast. This is a worrying trend that can only be resolved through increased information exchange and coordination between vessels reporting and response agencies in the Gulf of Guinea Region. Despite prompt action by navies in the region, there remains an urgent need to address this crime, which continues to have a direct impact on the safety and security of innocent seafarers,” said Michael Howlett, Director of the ICC International Maritime Bureau.

Singapore Straits
The increase in incidents against vessels underway within the Singapore Straits has continued since Q4 2019, with 23 incidents reported for 2020. Vessels were boarded in 22 of the 23 incidents. Although considered low level – i.e aimed at armed theft from the vessel – and tend to take place in the hours of darkness, one crew was injured, another taken hostage and two threatened during these incidents. Knives were reported in at least 14 incidents. 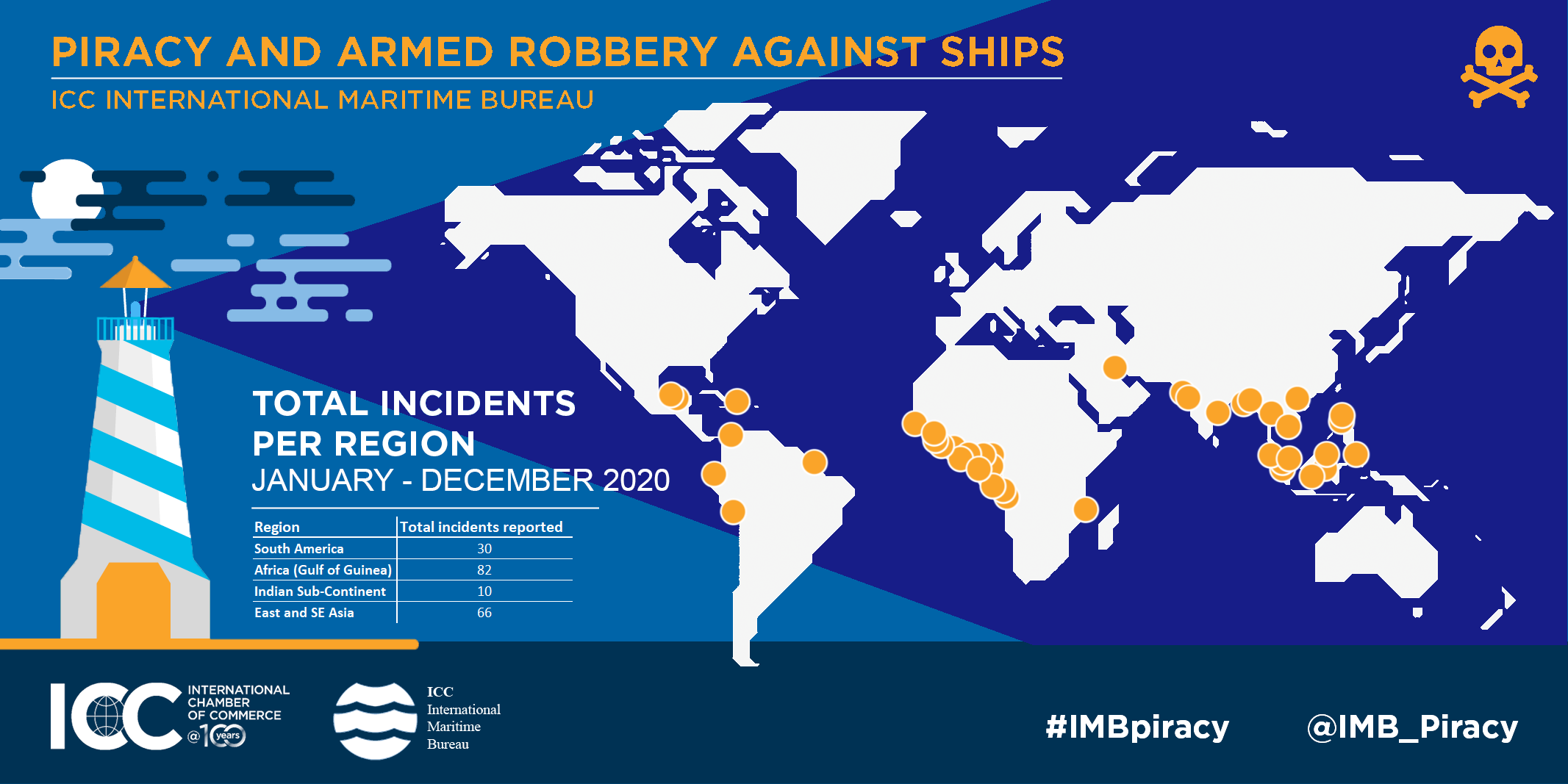 Indonesia
Armed robbery reportsin Indonesia remained consistent with 26 low‐level incidentsreported in 2020, in comparison to 25 in 2019. Vessels continue to be boarded while anchored or berthed at Indonesian ports with two crew taken hostage and two threatened in 2020. The continued efforts of the Indonesian Marine Police are credited for maintaining the reduced levels of reported incidents. 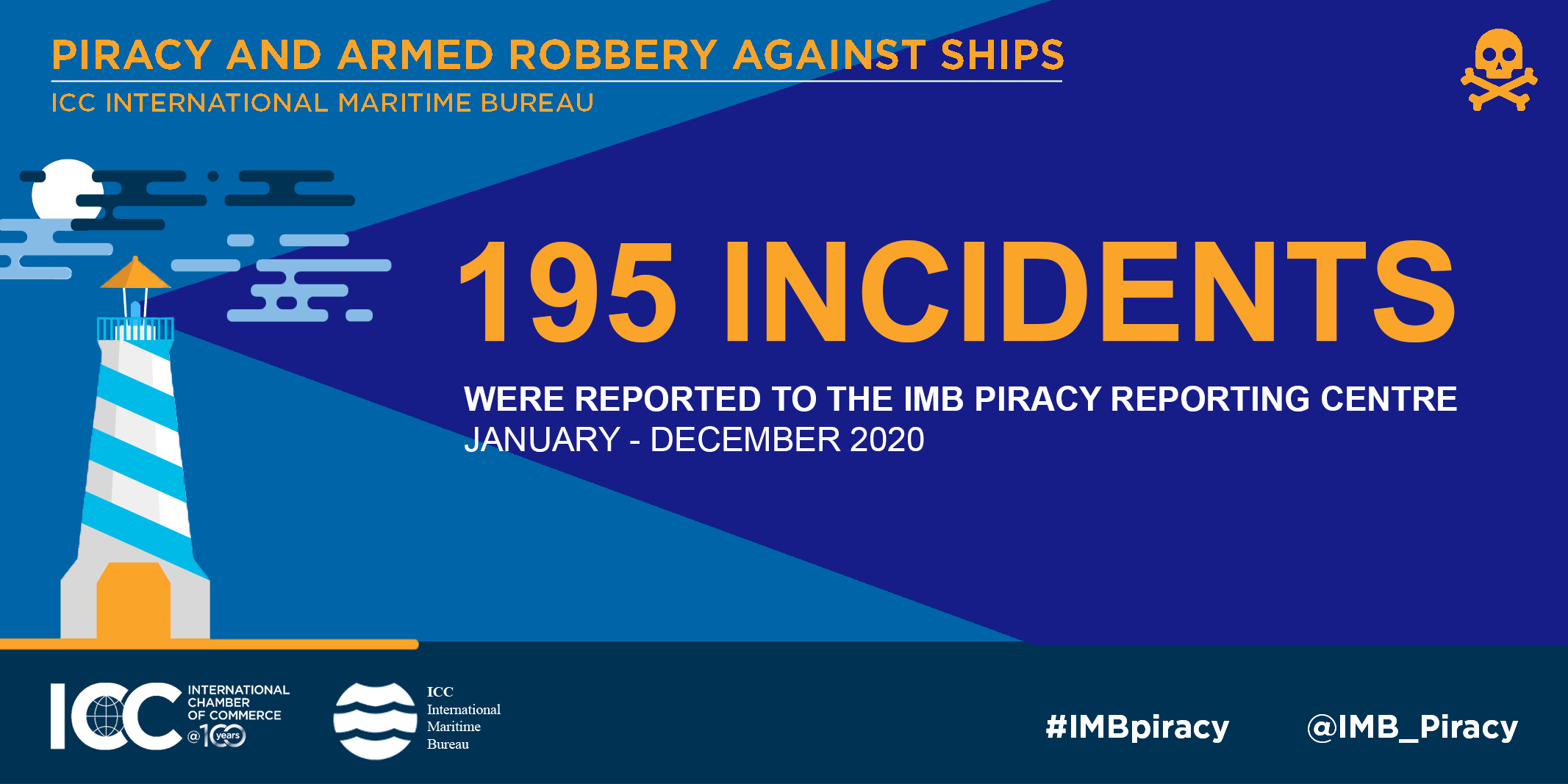 Another year without incident in Somalia, but crew must maintain vigilance
The IMB PRC received zero incidents of piracy and armed robbery in 2020 for Somalia. While there were no recorded incidents, the IMB PRC warns that Somalia pirates continue to possess the capacity to carry out attacks in the Somali basin and wider Indian Ocean. In particular, the report warns that, “Masters and crew must remain vigilant and cautious when transiting these waters.” 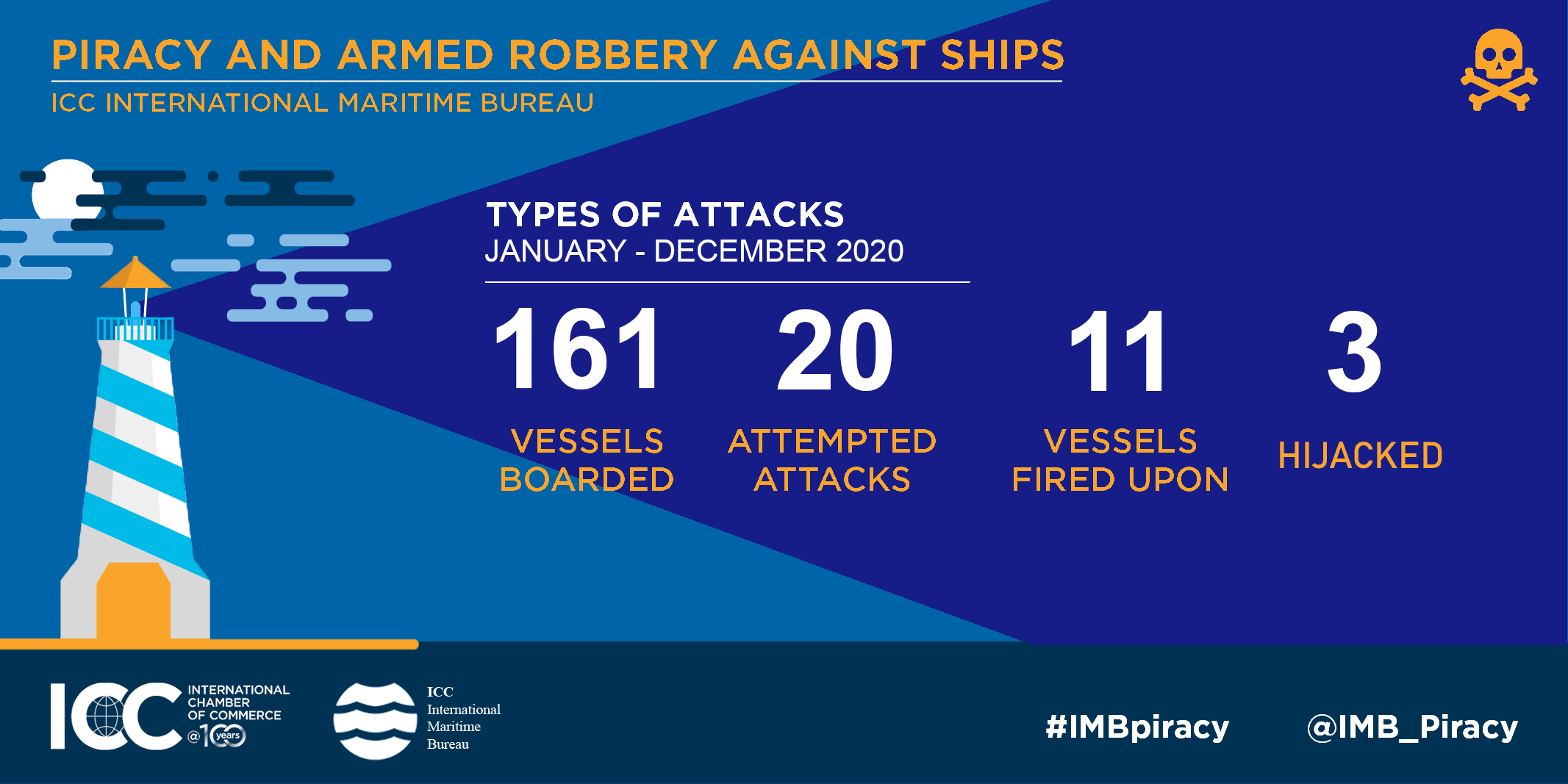 IMB Piracy Reporting Centre
Since its founding in 1991, IMB PRC remains a single point of contact to report all crimes of maritime piracy and armed robbery, 24 hours a day. Their prompt forwarding of reports, and liaison with response agencies, broadcasts to shipping via GMDSS Safety Net Services and email alerts to CSOs, all provided free of cost, help the response against piracy and armed robbery and the security of seafarers, globally. IMB continues to encourage all shipmasters and owners to report all actual, attempted and suspected global piracy and armed robbery incidents to the IMB PRC. This first step in the response chain is vital to ensuring that adequate resources are allocated by authorities to tackle piracy. Transparent statistics from an independent, non‐political, international organization can act as a catalyst to achieve this goal.
Source: International Chamber of Commerce