Gulf of Guinea remains a high-risk area for seafarers

Of the 75 seafarers taken hostage onboard or kidnapped for ransom worldwide so far this year, 62 were captured in the Gulf of Guinea – off the coasts of Nigeria, Guinea, Togo, Benin and Cameroon, states the International Maritime Bureau’s (IMB) in its half-year report published on 8 July 2019.

Armed pirates in these high-risk waters kidnapped 27 crewmembers in the first half of 2019, and 25 in the same period in 2018. With 38 crew taken hostage globally, 37 kidnapped, four threatened, two injured, one assaulted and one reported killed, this means that 73% of all kidnappings at sea, and 92% of hostage-takings, so far in 2019 took place in the Gulf of Guinea. 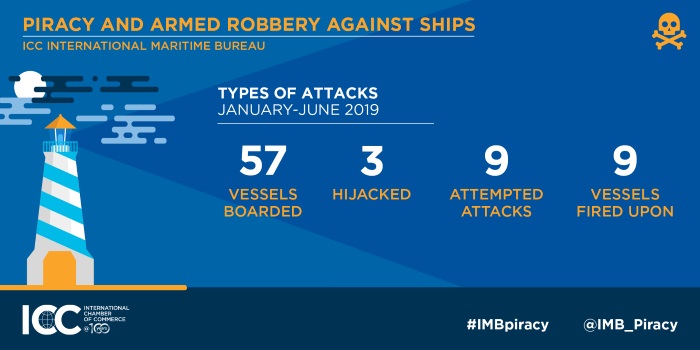 On the more positive side, the IMB reports a drop in global piracy, with 78 incidents recorded in the first half of 2019, compared with 107 incidents for the same period of 2018. It also states that there may be signs of improvement in the Gulf of Guinea, with a decrease in the number of attacks recorded for the second quarter of 2019. While recognizing that many attacks go unreported, IMB recorded 21 incidents around Nigeria so far in 2019, down from 31 in the same period of 2018.

IMB is urging seafarers in the Gulf of Guinea region to “remain vigilant and report all suspicious activity to regional response centres and the IMB”. It emphasises that early detection of an approaching suspicious craft is key to prevent boarding and allows time to raise the alarm and retreat into a citadel, if needed.

We advise ship operators and their masters to continue to exercise caution when operating in the Gulf of Guinea and to:

• Carry out a voyage specific threat and risk assessments prior to entering the region, review the Ship’s Security Plan and adopt relevant preventive measures, following the Global Counter Piracy Guidance for Companies, Masters and Seafarers and the Interim Guidelines for Owners, Operators and Masters for protection against piracy in the Gulf of Guinea region.
• Brief the crew on the security arrangements identified in the Ship Security Plan and conduct drills prior to arriving in an area of increased risk. Many attempted piracy and armed robbery attacks are unsuccessful, countered by ships’ crew who have planned and trained in advance.
• Report to the MEAT-GOG (tel: +33(0)2 98 22 88 88 / e-mail: [email protected]). A major lesson learnt from operations against piracy and armed robbery to date is the importance of liaison with the military and law enforcement. This is an essential part of self-protection that applies to all ships. Once ships have entered the area of increased risk, it is important that they continue to report while transiting within the area. This will allow the reporting centre to update the ship of any maritime security related incidents or threats in that region.
• And last but not least, keep a proper, visual lookout! According to the Global Counter Piracy Guidance, this is the most effective method of ship protection. It can help identify a suspicious approach or attack early on, allows defences to be deployed and, can serve as an effective deterrent to would-be attackers. 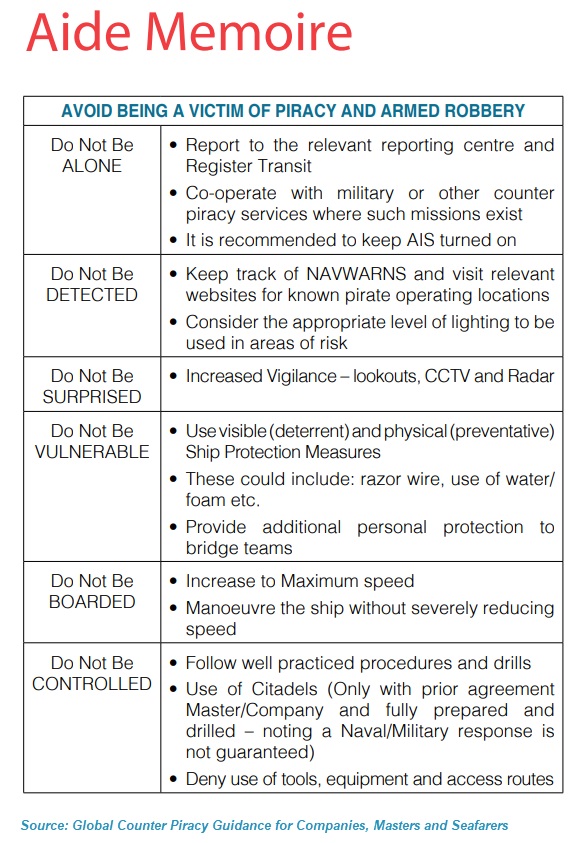 2019-07-10
hellenicshippingnews..
Previous: New Procedure For Shipping Industry To Notify The US Government Of Non Availability Of Compliant Fuel Oil
Next: TT Talk – Review of global cargo theft in 2018