Hamburg and China have been trading partners by since the 18th century. Hamburg has nurtured a city & port partnership with Shanghai since 1986. Hamburg opened its Liaison Office – HLO – in Shanghai in 1995. This represents Hamburg interests in China and markets the city as a destination for visitors. Both the HLO in Shanghai and the Port Representative Office in Hong Kong promote the city on the spot with numerous events, showcasing at trade fairs, exchanging expertise and experience, along with cultivating continuous contacts to promote the whole array of services of the Port of Hamburg and the logistics competence of the Hamburg Metropolitan Region.

China is now the Port of Hamburg’s largest trading partner. The Hanseatic City is seen as China’s Gateway to Europe for Chinese products, and at the same time as the German export trade’s gateway to the Far East. In 2018 alone, Germany’s largest seaport handled around 2.6 million TEU or standard containers for the China Trade. Almost one in three of all containers crossing the quay walls in the Port of Hamburg have the Middle Kingdom as their origin or destination. A total of 15 liner services link Hamburg with all China’s leading ports. In 2018 exports to China worth 5.3 billion euros were handled via the Port of Hamburg in direct foreign trade between Hamburg and China, along with imports valued at 8.0 billion euros. In 2018 the volume of goods transported by ocean-going vessels between Hamburg and China totalled around 24 million tons.

Hamburg positions itself as top rail hub for both seagoing and overland China trades
“As a digital-innovative hub, HHLA is already very well positioned on maritime routes and the transcontinental Silk Road. We have maintained close business links with Chinese companies for over 35 years. At Container Terminal Tollerort, every week we handle the Chinese shipping company Cosco’s largest containerships. Our rail subsidiary Metrans is extremely active on the new Silk Road. We have also long been contributing towards giving the Silk Road initiative an entrepreneurial identity,” says Thomas Lütje, Marketing Director for Hamburger Hafen- und Logistik AG – HHLA.

The Port of Hamburg’s hub function generally, and very well developed seaport-hinterland infrastructure, make it the central hub for the China Trades, not just for Germany, but for Austria, Poland, Czechia, Russia, Hungary, Slovakia and Switzerland. Along with – as before dominant – transport by ship, since 2013 the ‘New Silk Road’ has developed overland as an attractive rail link and alternative to sea/air freight for time-sensitive freight. “As the hub for China cargoes transported by oceangoing vessel, with its far-reaching China expertise as well as excellent commercial connections, it is only logical that Hamburg should play a key role for rail shipments along the New Silk Road,” says Axel Mattern, Joint CEO of Port of Hamburg Marketing. 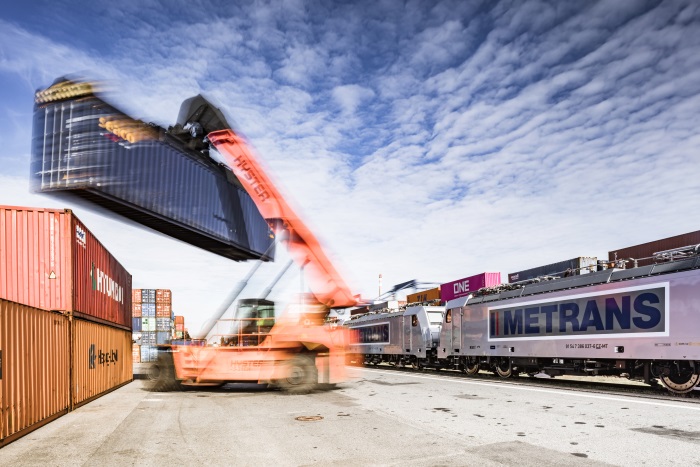 The Chinese are generally pursuing very ambitious plans, already having systematically further developed rail freight traffic along the transcontinental Silk Road in recent years. By 2014, an annual total of almost 800 trains with a volume of 25,000 TEU were taking the New Silk Road between the Middle Kingdom and Western Europe. In 2016 the figure rose to 1,700 trains with a container volume of 145,000 TEU. By 2027, every year 670,000 TEU should be rolling along the Eurasian rail corridors. “METRANS is one of the leading providers of intermodal container transport services on European seaport-hinterland routes. More than 30 METRANS trains per month connect leading Chinese commercial centres with the METRANS network. Clearance takes place at Malaszewicze/Brest on the Polish/Byelorussian frontier, whence trains proceed onwards into Poland, Czechia or direct to Hamburg. We aim to further expand these services,” says Peter Kiss, CEO of Metrans.