Dozens of gantry cranes against a backdrop of towering skyscrapers, thousands of containers of all colors, and ships docking and casting off around the clock – welcome to Singapore, our port of the month.

The figures are impressive: Some 130,000 ships call at Singapore every year, and there are about 1,000 ships in the port at the same time at any given moment each day. In 2015, approximately 31 million TEU were handled in Singapore, making it the second-busiest port in the world after Shanghai.

As one of the largest and most modern ports in the world, the Port of Singapore also plays a very important role for Hapag-Lloyd: Each week, the port is served by several Hapag-Lloyd services. In addition, Singapore is Hapag-Lloyd’s most important port for transshipments, as the lion’s share of the cargo that Hapag-Lloyd handles there comes from other countries of origin.
Hapag-Lloyd opened its office in Singapore back in 1991. What’s more, Hapag-Lloyd’s regional headquarters for Asia and Oceania is also located there.

Among the factors that have helped Singapore gain a reputation as one of the most significant ports in the world is its favorable location at the crossroads of several important shipping lanes. For example, Singapore lies on the major trade routes between East and West, and is particularly important for shipments from China to Europe. 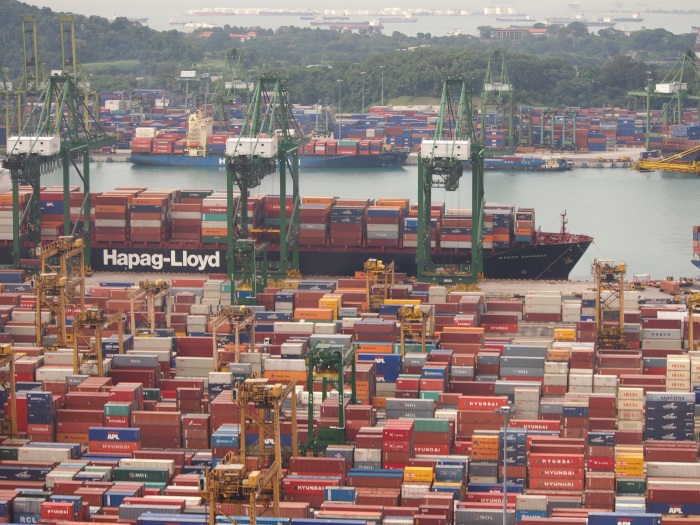 But there’s also another factor that has boosted the port’s importance: Singapore’s economic upswing. Singapore’s economy has enjoyed skyrocketing growth in recent decades, and it now numbers among the richest industrialized countries in the world. The economy of Singapore is geared toward the service sector, and enjoys very strong connections to global trade. The island nation has a very well-trained workforce and offers many capacities and resources for trade – such as in the port.

But, of course, Singapore also offers more than just a gigantic port. As one of Asia’s most important financial centers, in addition to tourists, it also mainly attracts businesspeople to the city. Approximately 5.7 million people live in Singapore.

Tourists and residents alike love Singapore’s Marina Bay, a city district on the water whose attractions include a Ferris wheel and a large park. Temples, neighborhoods rich in history and tradition, and museums like the National Gallery Singapore shows the various facets of the city.
Source: Hapag-Lloyd