Traditional manual work is increasingly being replaced by automated processes, such as self-driving Automated Guided Vehicles in container terminals. Thanks to robots, the quality of ship painting can also be improved and the docking time shortened. Hapag-Lloyd is currently testing the process with nine ships.

Keeping barnacles, mussels and algae off the hull – the subject of fouling is as old as shipping itself. Fouling dramatically increases drag, which results in high fuel consumption and makes it harder to achieve climate targets. So, it’s a question that repeatedly arises: How can fouling be efficiently and reliably prevented over a period of five years, when a vessel will have to go into a shipyard anyways for its regular classification survey?

“Finding an antifouling agent that works for two years isn’t a problem,” says Jan-Evan Lütje, a shipbuilding engineer in Hapag-Lloyd’s Technical Fleet Management. “But it’s important to have smooth surfaces without fouling in the third, fourth and fifth years, too, as it ensures high performance and low fuel consumption.” 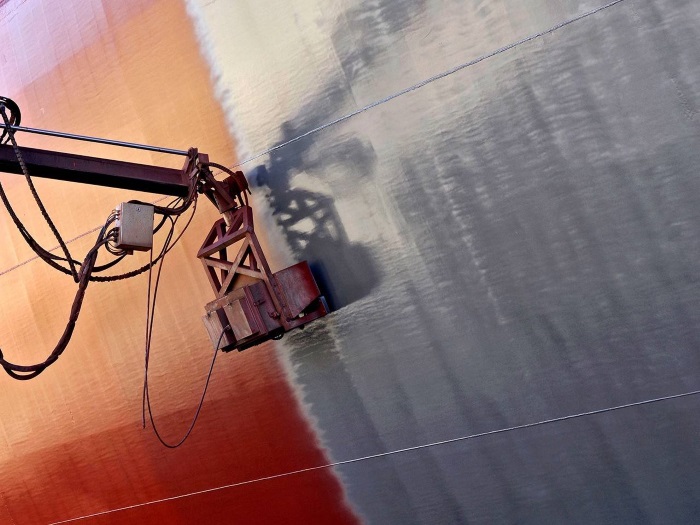 To make this happen, there are two decisive factors: a smooth surface and the paint application itself. After all, the better the hull is cleared of its old layers of paint, the more evenly the new layers of paint can be applied to the part of the hull below the water line. For the best-possible application of paint, the individual layers must be applied exactly at right angles to the surface, as this is the only way to minimise the overspray – i.e. the spray mist that makes the surface next to the section being worked on rough.

“Both are a problem with traditional application by hand, as the staff in the shipyard varies considerably in terms of experience and qualifications,” Lütje explains. In shipyards in Hamburg, Marseilles and most recently Singapore, Hapag-Lloyd tested the so-called Hull Treatment Carrier (HTC) coating on a total of nine ships. The system from the Austrian manufacturer Palfinger is made up of several automated units that travel along the side of the ship’s hull while it is in dry dock. Its job is to remove the old layers of paint from the hull with extremely high water pressure and then to evenly apply new paint.

The machining heads of the HTC system can reach up to 77 percent of the approximately 9,300 square metres of surface area per ship. The shipyard staff works by hand on the bulbous bow, below the bilge keels, at the propeller apertures, and on the flat bottom. The HTCs can each apply around 600 to 800 square metres of paint per hour, which means it only takes a few hours for one coat of paint.

Thanks to robots, overspray is no longer an issue. The thickness of the applied layer of paint is also much more uniform. And it might also be possible to lower the amount of paint that is used. “We can ensure a certain level of quality with automated application systems, and the system is less harmful to the environment,” Lütje says, concluding: “The performance indicators show that the smoother surface results in both lower fuel consumption at the start and a greater resilience to fouling over the entire 60 months.”
Source: Hapag-Lloyd