Fifty years ago the world’s shipping industry was experiencing the onset of changes which were destined to have a lasting impact and shape the pattern of activities seen in today’s markets. This feature represents continuity. But there were events during the past half century representing discontinuity, upheavals (mostly unforeseen) greatly disrupting markets. The next half-century ahead probably will see many more disruptive changes.

Throughout the past fifty years one publication in particular has assiduously chronicled and analysed evolving trends. The Review of Maritime Transport has been published annually since 1968 by the United Nations Conference on Trade and Development and is now celebrating its remarkable history.

To commemorate this occasion UNCTAD last month published a special report: 50 years of Review of Maritime Transport, 1968-2018: Reflecting on the past, exploring the future. Historical analysis can be valuable. Accompanying this perspective, a large part of the special report is forward-looking, focusing on the future, discussing aspects likely to be at the forefront over the decades ahead, and how the RMT research and analysis might cover these matters.

One of the most popular songs (in the UK) fifty years ago in 1968 was ‘Congratulations’ by well-known British singer Cliff Richard. Congratulations to UNCTAD at that time were justified by publication of the first RMT edition. Perhaps the title of singer Joe Cocker’s hit in the same year, ‘With a little help from my friends’, could be seen as applicable to the value of UNCTAD’s annual review in assisting shipping people and others with valuable research and analysis, contributing to good decision-making.

Writing in a preface to the new 50 Years report secretary-general Mukhisa Kituyi points out that UNCTAD’s annual review has, for five decades, provided comprehensive maritime transport data and statistics. It is now “unique and unrivalled”, covering technical and policy aspects of maritime transport with both short- and long-term perspectives. It has become a standard reference for policy-makers, researchers, academics, consultants and government agencies while benefiting the maritime industries. Also, it remains attentive to the concerns of developing countries.

For the future, many challenges in the maritime world lie ahead. Some probably have not yet been revealed, if the events of the past half century are any indication of surprising changes occurring. Among those changes which observers can foresee as proving influential are the hard-to-predict trends in seaborne trade and the equally difficult-to-predict response of shipowners in providing fleet capacity.

Additionally, as UNCTAD’s 50 Years report emphasises, regulation has become a central aspect of the outlook, especially the rules being introduced to cut ships’ emissions and pollution. The strategies for controlling ballast water and fuel sulphur emissions contamination are visible, even if the overall effects and ramifications are not so clear. The decarbonising challenge within the next few decades is much bigger, and technological solutions are still awaited. Uncertainty surrounding regulation of ship and port automation is also considerable.

Offering assistance to developing countries, promoting their international trade always has been a priority for UNCTAD. Maritime transport’s role is an essential element. The Review of Maritime Transport analyses relevant aspects. In another context the RMT is especially valuable to a much wider user range, because it is free-of-charge. Alternative sources of much of the information contained are available, but these are mostly accessible only at (relatively) high cost and would require extensive time and effort to replicate the RMT coverage.

A table in the 50 Years report, summarised below, highlights the remarkable growth of world seaborne trade over the past half century, and the shift from oil in the early part of the period, to dry bulk commodities as the main driver of the upwards trend. Total world seaborne trade more than doubled from 2.6 billion tonnes in 1970, the first year for which UNCTAD data became available, to 6.0bnt in 2000, and continued rising by almost 80 percent to 10.7bnt in 2017. 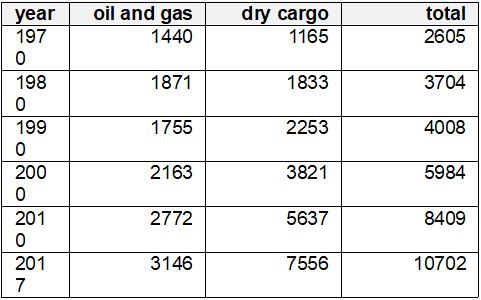 Strong growth in dry bulk commodities and other dry cargo (especially containerised) movements propelled the long-term rising trend in all seaborne trade during the past half century. Dry trade volumes, bulk plus other, more than tripled from 1.2 bnt in 1970, to 3.8bnt in 2000. There was a subsequent doubling of dry trade volumes to 7.6bnt in 2017, according to UNCTAD data shown in the table.

Trends in the world merchant ship fleet during the past fifty years reflected technological changes as well as seaborne trade growth. The UNCTAD 50 Years report states that “ technological trends have influenced markets and operations in different ways and include ship size and automation developments”. These changes were seen in both dry bulk and tanker shipping. Seeking economies of scale to reduce transport unit cost was a common theme. Containerisation of cargo liner services combined technological and organisational changes and “profoundly changed the nature of the industry”.

Based on UNCTAD’s data, the world fleet had a carrying capacity of 320 million deadweight tonnes in 1970. Over the next three decades it rose by 150 percent to 800m dwt in 2000, and then more than doubled to 1860m dwt in 2017 when it was comprised of 93,100 ships. The proportion represented by tankers and ‘general cargo’ ships declined, while the shares of bulk carriers and container ships increased.

The pattern of world fleet development by country of ownership and registration changed greatly over the past half century, as highlighted in the 50 Years report. One feature emphasised is that “developed countries continue to be major owners but to a much lesser extent than in the early days of RMT”. Another is that “the assumption…of the 1980s that tonnage flying flags of convenience is beneficially owned in developed countries no longer holds true”. Ownership and registration patterns became much more complex, with shipowners in middle income developing countries increasingly choosing to register under foreign flags.

Illustrating unpredicted events causing extensive upheavals in shipping markets during the period reviewed, two are highlighted. The Suez Canal was closed by hostilities in June 1967 and remained closed for eight years until June 1975. Because of its enduring impact on trading patterns, this was one of maritime history’s largest disruptions. Before that episode ended, a further ‘external shock’ occurred, the first global oil crisis in 1973/74, which adversely affected the tanker market and, through negative effects on the world economy, other shipping sectors. The second oil crisis followed in 1979.

Maritime sustainability as a policy priority for UNCTAD over many years is also emphasised in the 50 Years report. Especially since the global economic crisis a decade ago, a need to balance the economic, environmental and social sustainability dimensions of maritime transport has been more prominent. Concerns about the sector’s extensive reliance on oil for propulsion and the accompanying heavy carbon and environmental footprint have been at the forefront.

The UNCTAD 50 Years report adopts a cautious stance towards making predictions, particularly long-term predictions stretching out over a period of several decades. This approach seems refreshingly realistic. It contrasts sharply with recent contributions by other reputable maritime players, which perhaps tend to create an impression that key aspects are relatively easy to predict (or ‘project’) with remarkable precision over many years ahead.

While precise predictions are often challenging, ideas about the nature and characteristics of changes in the future, together with indications of the approximate magnitude, are sometimes useful. The 50 Years report incorporates an opinion survey designed to assist in identifying which technologies are likely to act as drivers of future change.

From a list of eight maritime-related technologies, the four considered by the survey participants to be the most important were alternative fuels, increased port automation, autonomous vessels and blockchain. The remaining four considered to be less important were additive (3-D) printing, robotics, hyperloop and cryptocurrencies.

Drawing conclusions from analysis of these elements, the forward-looking view suggests that there are two simultaneously developing technological streams. One “is related to climate change and how the shipping industry and regulators respond to efforts to reduce vessel emissions”. The second “is how digital technologies and automation affect both the provision of shipping and port services and how regulators will choose to address these changes”.

Another aspect examined in the UNCTAD report is regulatory policies and anticipated changes. Emphasising the extent to which international regulation has expanded, opinion survey participants were asked to identify the eight most important from a list of 18 items. The top potential priorities for future regulatory policies were indicated as (a) ‘government or port focus on reduced emissions from vessels (CO2, NOx, SOx, particulate matter)’ and (b) ’government regulations regarding the use of alternative vessel fuels (new fuel standards)’.

Concluding on this aspect, it is suggested that the maritime industry and governments are at the start of a concerted effort to focus on improving the level of greenhouse gas emissions. There are many options available to reduce the industry’s greenhouse gas impact, although not to eliminate it entirely. Numerous other regulatory issues are considered in the report, including competition policies related to container liner services.

What further influences could affect maritime activities over the years ahead? Among several categorised as factors beyond business and government control, one of those identified as most important is greater use of automatic identification system (AIS) and Big Data analysis. Another is restructuring of trade routes as a result of China’s Belt and Road Initiative. Geopolitical changes and ongoing geopolitical realignment globally is noted.

One contributor to UNCTAD’s 50 Years report argues that “significant transformation will…also arrive in the shipping world very soon. The next 10 or 20 years will see as much change as we have experienced in the past 100 years”, adding that “shipping is on the brink of a new era”. This opinion was voiced by International Maritime Organization secretary-general Kitack Lim, among several ‘distinguished persons’ invited to provide reflections.

Another contributor to the report, former International Chamber of Shipping secretary-general Peter Hinchliffe, suggests that “the main feature for shipping for the next 20 years will be the costly implementation of regulations focused on environmental protection”. An additional comment argues that “the capital and operational cost of these measures…will be very significant and likely to continue to drive the reshaping of the industry”.

World Maritime University president Cleopatra Doumbia-Henry emphasises prospects for “a period of perhaps unprecedented change and challenges for medium- and long-term maritime trade and transport, at least in terms of the speed of that change”. According to this view, “this change will be on many fronts affecting both ships and ports”, and there will be “an even more important role for maritime education and training and research institutions”.

These individual opinions reinforce the perception that the world’s maritime activities are set for a period of momentous change. While it may be difficult, perhaps impossible to construct a solid, more specific prediction, the broad shape of the future course is becoming clearer.

Attempting to assess the wide range of possible events in the future, the 50 Years report summarises scenario planning exercises conducted by several organisations. These offer some guidance on outcomes based on stated assumptions, providing potentially useful ideas. But, as the UNCTAD report concludes “an agile mindset will be needed as RMT faces the ‘unknown unknowns’ emerging from the shadows to alter the development path of new technologies and the players that succeed in bringing them to the market”.