Australia has declared a national emergency along the east coast of the country, following heavy rains that caused floods across New South Wales and southern parts of Queensland.

The affected areas include the main coal producing regions of the country. Many coal mines in the region were already saturated by rains earlier in the season, and both the mining and transport of coal are likely to suffer from disruptions following the recent rainfall.

Port Kembla Coal Terminal declared a Force Majeure event on 8th March 2022, ceasing all loading operations until further notice. The Force Majeure notification cites extensive recent rainfall and significant slumping along the stockyard. Just over 7 million tons of coal were exported from Port Kembla in 2021, with the main destinations being India, Vietnam and Taiwan. In the first 2 months of 2022, total coal exports from Port Kembla are already down by 15% from the same period of 2021, with weather related disruptions playing a significant role. 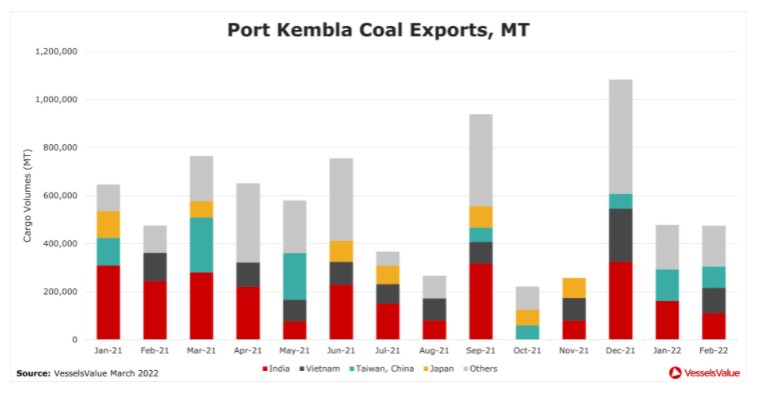 Australia is the largest exporter in the world of metallurgical coal, used in steelmaking, and the second largest exporter, after Indonesia, of thermal coal used in power generation. With global energy markets extremely tight, including for thermal coal which is currently trading at over $400 per ton, these disruptions to Australian supplies are heaping additional pressure on energy consumers globally.
Source: VesselsValue