Here’s how CO2 emissions have changed since 1900

Leaders from all over the world are currently gathering at the Conference of the Parties of the UNFCCC (COP 27) in Egypt to discuss climate action, and to negotiate the commitments being made by countries to the global climate agenda.

This visualization based on data from the Global Carbon Project shows the changes in global fossil fuel carbon dioxide (CO₂) emissions from 1900 to 2020, putting the challenge of fighting climate change into perspective. 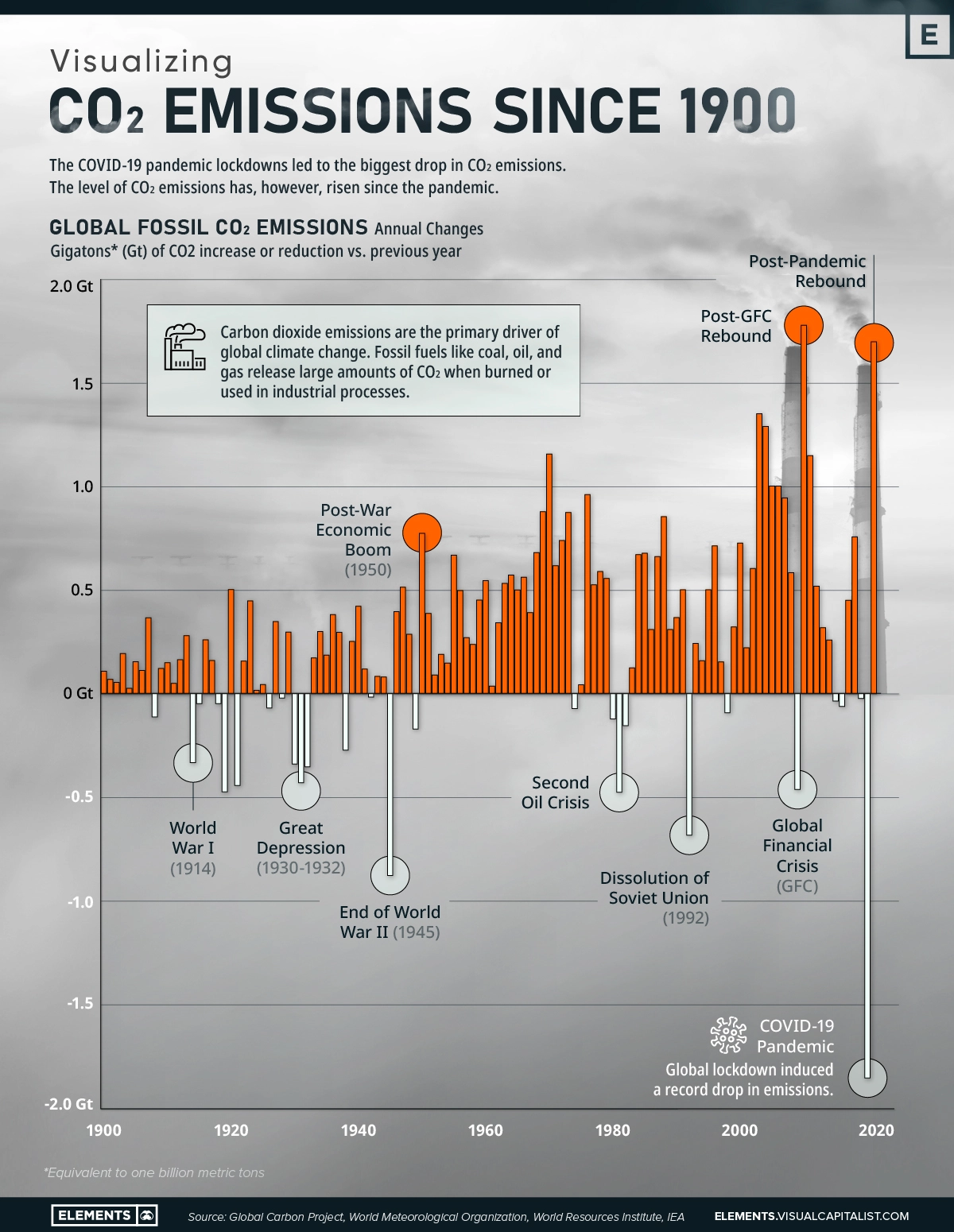 Before the Industrial Revolution (1760-1840), emissions were very low. However, with the increased use of fossil fuels to power machines, emissions rose to 6 billion tonnes of CO₂ per year globally by 1950. The amount had almost quadrupled by 1990, reaching a rate of over 22 billion tonnes per year. 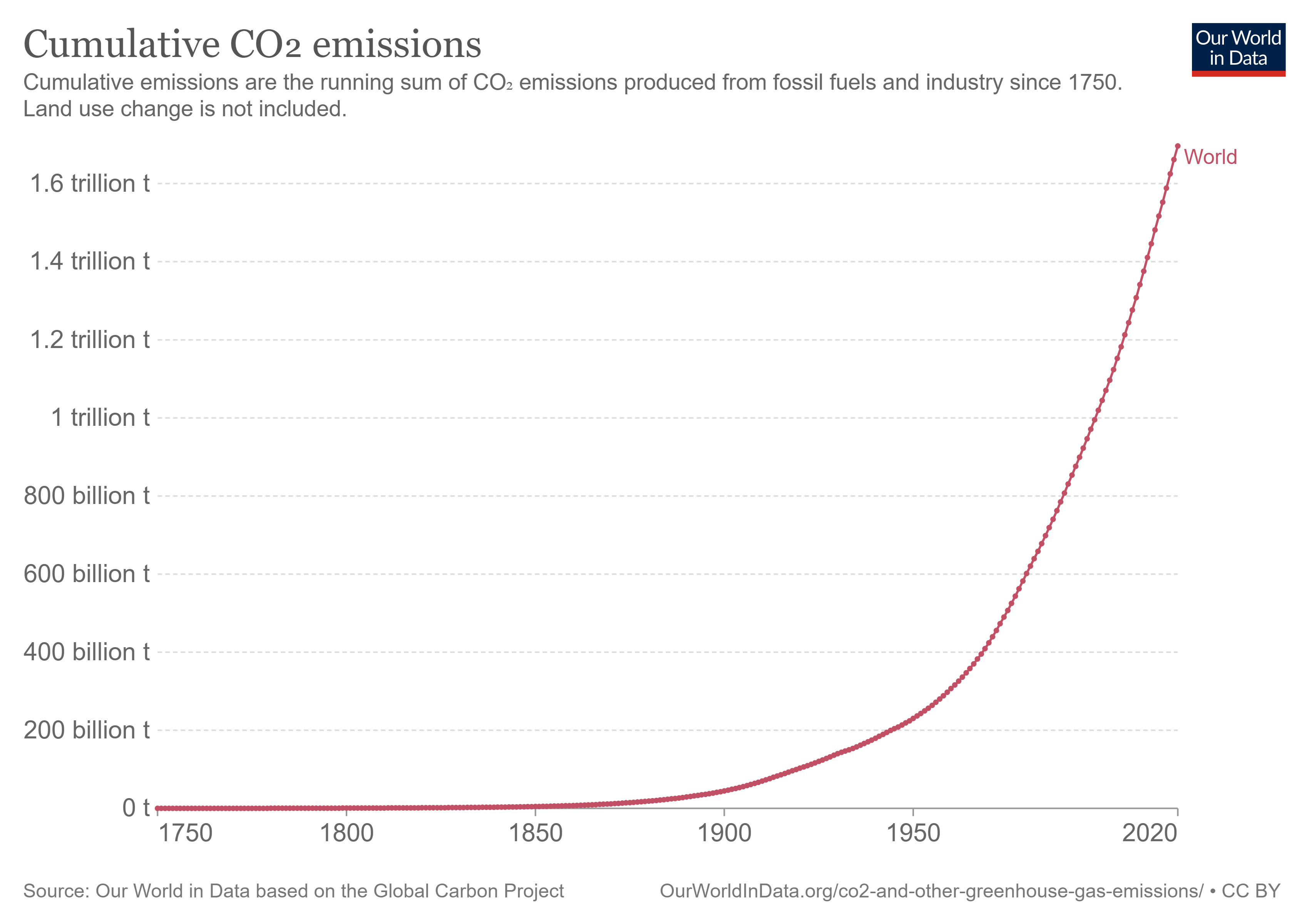 Prior to the COVID-19 pandemic, average global growth in fossil CO₂ emissions had slowed to 0.9% annually during the 2010s, reaching 36.7 gigatons of CO₂ added to the atmosphere in 2019.

However, in 2020, global lockdowns led to the biggest decrease in CO₂ emissions ever seen in absolute terms. Global fossil CO₂ emissions decreased by 5.2% to 34.8 gigatons, mainly due to halts in aviation, surface transport, power generation, and manufacturing during the pandemic.

Since then, emissions have approached pre-pandemic levels, reaching 36.2 gigatons added to the atmosphere in 2021.

Biggest emitters, by country
Asia, led by China, is the largest emitter, with the continent accounting for more than half of global emissions. 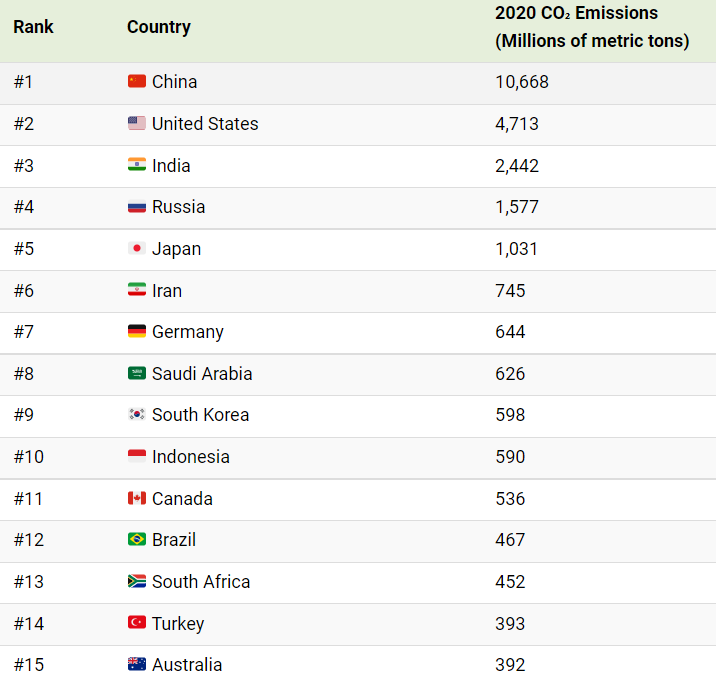 Coal power generation set for record increase
To avoid the worst impacts of climate change, more than 130 countries have now set or are considering a target of reducing emissions to net zero by 2050.

Much of the slowdown in emissions growth in the 2010s was attributable to the substitution of coal—the fuel that contributes most to planet-warming emissions—with gas and renewables. In addition, during the previous COP26 held in Glasgow, 40 nations agreed to phase coal out of their energy mixes.

Despite that, in 2021, coal-fired electricity generation reached all-time highs globally and is set for a new record in 2022 as consumption surged in Europe to replace shortfalls in hydro, nuclear, and Russian natural gas.

As leaders meet in Egypt for the world’s largest gathering on climate action, it will be up to them to come up with a plan for making their environmental aspirations a reality.
Source: World Economic Forum