June has been a crazy month for market-moving global events, and the tail end of this week is shaping up the same way, if OPEC succeeds in shaking up the status quo.

The next 24 to 48 hours could turn into a “headline-driven-free-for-all, so buckle in,” is the sage advice from OANDA’s head of trading, Stephen Innes.

He’s referring to this week’s three-day OPEC summit, which ends Saturday. In the spotlight, oil-producing powerhouses Saudi Arabia and Russia are broadly expected to push through an output increase ahead of the expiration of a pact to keep supply under control. Oil is taking a hit this morning on signs Iran may be ready to sign onto any deal. 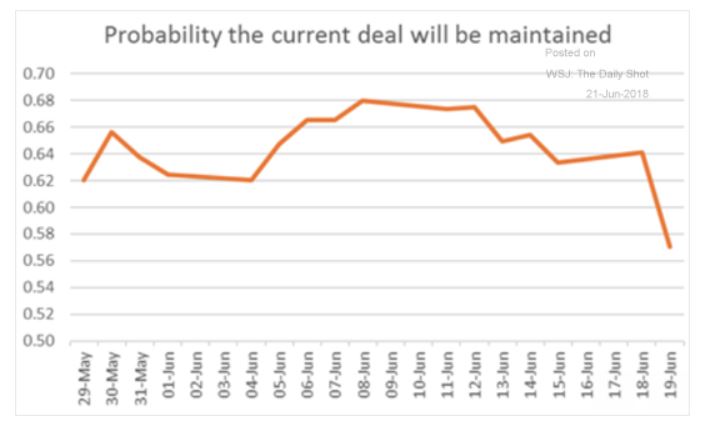 That brings us to our call of the day from analysts at Barclays, who say watch out for a curve ball from the crude-producing gang.

A “lack of consensus on any output increase,” is the risk for investors, say analysts Ajay Rajadhyaksha and Michael Gavin in a note to clients.

That could mean higher oil prices, they add, because “even if Russia and Saudi Arabia raise output unilaterally, it would leave OPEC’s spare capacity cushion thin by historical standards.”

And that provides upside risk for a commodity whose rally stalled out in the second quarter, they note.

Saudi Arabia holds most of OPEC’s spare oil capacity — the volume of production that can be brought on within 30 days and sustained for at least 90. If the Saudis boost their output materially, then that would leave capacity pretty tight for the cartel, according to Shin Kim, head of oil supply analytics at S&P Global Platts.

In a note to clients, Kim lays out a laundry list of supply worries out there: concerns about Iran production due to looming U.S. sanctions; a messy Venezuela situation; signs of fighting in Libya; and in Nigeria, an election and possible attacks on oil facilities in 2019.

Indeed, oil execs and even Norway’s government are among those who have been talking $100 oil recently.

Saudi Arabia is the place to watch for more reasons than one, as it just snagged coveted emerging markets status from index compiler MSCI. That could mean billions of investment dollars and good news for that Saudi Aramco IPO the country has promised.
Source: Market Watch