This morning, the Falklands Maritime Heritage Trust announced that the wreck of Sir Ernest Shackleton’s ship ‘Endurance, lost in 1915, has been located successfully in the Weddell Sea

A multinational team of experts aboard the South African Antarctic Supply Vessel ‘SA Agulhas II’ departed Cape Town on 5th February on the Endurance22 Expedition. Onboard the vessel, 43 local seafarers under Captain Knowledge Bengu would provide critical support to the expedition team.

Donald Lamont, Chairperson of the Falklands Maritime Heritage Trust, in a letter to Captain Bengu highlighted the essential role played by the South African ship:

“As we began planning this expedition, we looked no further than South Africa for the ship we needed and for the Master, Ice Pilot and crew who could get us to where we are today. You have ensured that our expedition team had the right platform in the right place and at the right time. This is your success and that of those who serve under you.” 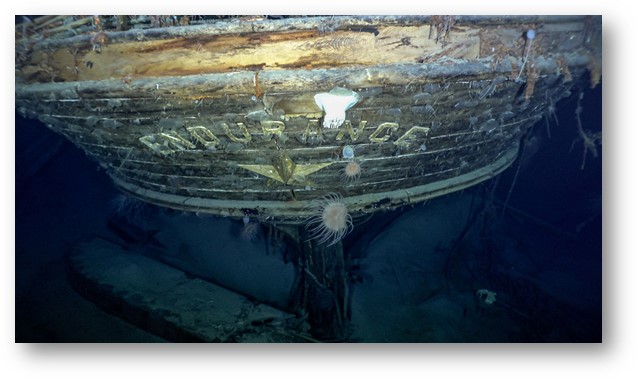 This sentiment was echoed by Expedition Leader Dr John Shears who noted that the Officers and Crew of the ‘SA Agulhas II’ had been “simply outstanding”; going on to thank all partners especially in South Africa who played a vital role in the success of the expedition.The ’SA Agulhas II’ is owned by the South African Department of Forestry, Fisheries and the Environment (DFFE) and the vessel is managed on their behalf by local marine services company AMSOL. As the leading employer of South Africa seafarers, AMSOL ensured that client requirements were met over months of pre-voyage planning that included the implementation of stringent COVID19 prevention protocols, a seafarer vaccination programme, as well as local procurement to supply the vessel and specific Endurance22 Expedition requirements. The company was also able to provide training berths for five South African Cadets during the voyage; exposing these young women and men beginning their career at sea to a once in a lifetime experience.

“Since 2019, we have been proud to be part of the team involved in the quest to locate the wreck; a unique project that drew on expertise from across our company. On the occasion of this historic milestone I would like to congratulate the Falklands Maritime Heritage Trust and the Endurance22 Expedition team. I extend my thanks to Captain Knowledge Bengu, Officers, Crew and AMSOL support personnel for their professionalism and commitment to the objectives of this voyage
Source: Falklands Maritime Heritage Trust