Fewer dry bulk ships were sold for demolition during the course of the past week. In its latest weekly report, shipbroker Clarkson Platou Hellas, said that “we have witnessed this week the rates in the dry bulk sector rebound slightly which may once again limit the supply of tonnage to the market. Despite many predictions, we are certainly not seeing the conveyor belt of dry bulk tonnage and this slight improved sentiment in the dry segment may further persuade Owners to hold on to their tonnage and try to gain some further profits on their aging units before the inevitable. Price expectations are high for those Owners considering the recycling element, however, there remains the ongoing obstacles in the Indian sub-Continent which may hinder, for now, any major jump in price indications, such as the devastating floods in Pakistan and continued Letter of Credit/U.S. Dollar issues. For now, we look set to crawl further into the Autumnal equinox at a snail’s pace in the recycling industry with the lack of activity set to continue”, the shipbroker said.

In a separate note, shipbroker Allied added this week that “things in the ship recycling market appeared stable during this past week with a decent flow of new demo deals being reported. What we observe is that despite the overall unfavorable economic conditions, ship recyclers make efforts to leave their “wait and see” stance that h=they have held of late and will try to grab any opportunity that emerges in the market and secure tonnage as confidence is boosted by the considerable domestic shortage of raw materials. In the Indian Sub-Continent, offered scrap price levels remained unshifted this week, the currency depreciations continued and the domestic steel demand levels are still appearing sluggish for the being. However, what came as a surprise this week are the slight signs of activity recorded from the Turkish market after a long period of inactivity. 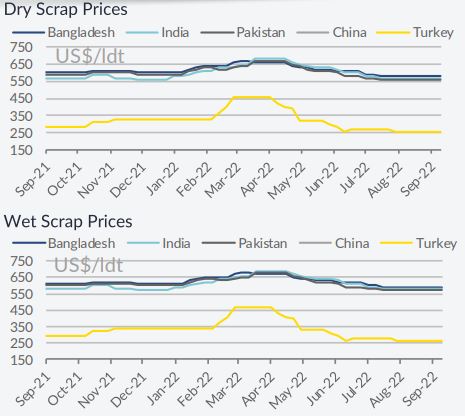 Taking a look at things from the sides of freight earning, the current ups and downs do not allow for any favorable indicators to be seen with regards to the near term performance of the market. However, we can say that given the end of Monsoon season, we are expecting to witness some kind of improvement in the domestic steel markets and as a result a potential support for offered scrap price levels”, the shipbroker concluded. 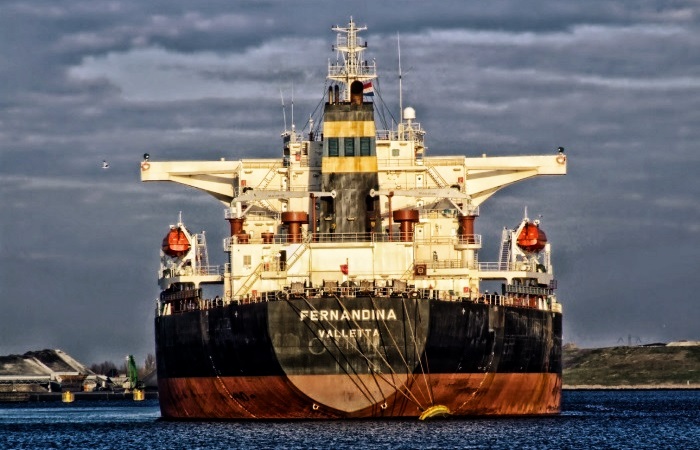 Meanwhile, in a separate report, GMS , the world’s leading cash buyer of ships said that “while activity seemed as though it had been steadily increasing going into the final quarter of the year, the last couple of weeks have sent mixed signals as to whether the 4th quarter will actually be better for the ship recycling sector (as many have been anticipating). Couple of weeks ago, we saw currencies plummet in Pakistan and Bangladesh to the point, a wait-and-watch attitude encompassed both markets – at least until the first sale to a local Recycler establishes the new baseline for a type of unit in that market. This week, it was local steel plate prices across the sub-continent board that declined to varying degrees, subsequently adding even more pressure on a potential ship-recycling resurgence for Q4.

Mixed in with the fact that there are still, very few candidates that have headed to sub-continent shores over the previous two quarters and sub-continent markets have – as a result – witnessed a gradual buildup of demand over this time, especially as plots and port reports empty out to eerily quiet levels (especially in Pakistan, which has not seen a fresh arrival at the waterfront for nearly 2 months now). We have not seen recycling markets as dormant for many a year, as all freight sectors push on and Ship Owners are opting to continue trading, rather than getting rid of their older assets. As Dry Bulk and Container rates continue to cool off, it may be that we see a few more vessels from these sectors before the year is out. Tankers too have seen a remarkable turnaround of late, with VLCCs finally seeing some positivity after years in the doldrums. The main supply of tankers that we have seen come for recycling over the last few years is therefore likely to dry up for the foreseeable future. Prices remain stationed at or just below the USD 600/LDT threshold, although there are still difficulties in getting vessels sold / delivered into Pakistan (due to a constantly depreciating currency) and in Bangladesh, due to tough government imposed L/C restrictions that are still in place there for any large US$ value transactions”, GMS concluded.
Nikos Roussanoglou, Hellenic Shipping News Worldwide