Hoisting The First Frame Of Ceiba

On the Pacific Coast of Costa Rica, in the “jungle shipyard” – El AstilleroVerde – an impressive milestone has been achieved. On the 20th of February 2019, the award-winning company, SAILCARGO INC., hoisted the first frame of their vessel, the 148ft (45m) long tallship, Ceiba, completely by hand. The international team is excited as this accomplishment marks the beginning of a new phase of construction of the three-masted square-topsail schooner, which is designed to carry cargo between the west coast of the Americas. Ceiba will be a flagship for Costa Rica, transforming the maritime industry through providing a carbon-negative alternative to conventional shipping. 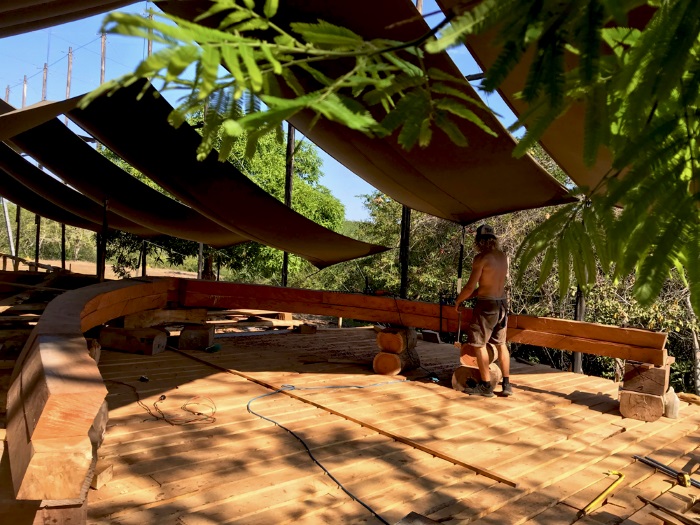 The team reached a major point of success in terms of the progression of Ceiba’s construction. Hoisting the first frame was achieved through pure ‘manpower’; hauling and lifting the giant that is Frame No. 48 up into the sky with the use of ropes rigged to keel, hanger and hand. Many strong arms heaved ropes through a pulley system, attached to a single mast-post for each toptimber, shear-end of the frame whilst the frame’s floor timber rested directly upon the keel onto which it was about to be placed. The initial 45 degrees of the lift proved to be difficult to achieve smoothly, however, after the hauling mechanism was improved and the team worked stronger together, the frame swung neatly up into place, giving the group the first glimpse of the vast vertical height of Ceiba. 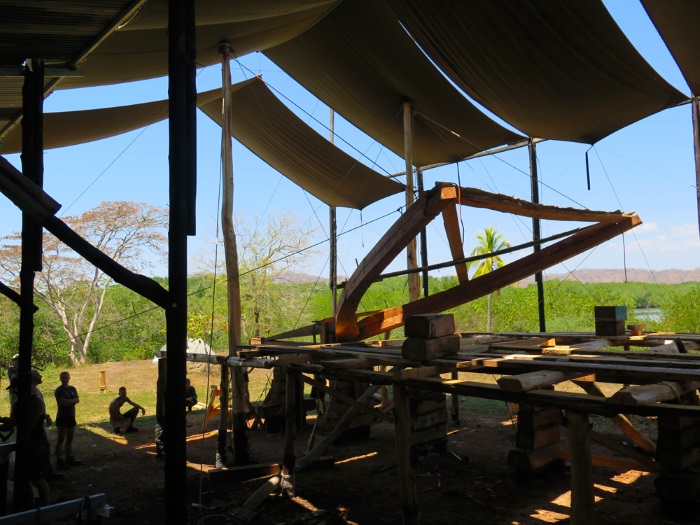 This is the first full forward frame, located just aft of the bow and is fixed together by hardwood tree-nails (also known as trunnels) of Tamarindo del Monte (Latin: Dialium guianese), which are wedged in place. Each of the large U-shaped frames, which have a maximum dimension of 8 by 8 meters, are made from Spanish Cedar (Cedrela odorata) and can be made of up to twelve separate pieces of the locally-sourced wood.

Looking forward, as each proceeding frame is under construction whilst the preceding is planed level and joined together, the aim is to have a new frame up each week for the next year, totalling approximately 56 weeks of putting all 56 frames together and attached to keel. Alongside, the team also plans to be working on the stem construction of Ceiba, at the bow, front-end of the ship, which will be using the well-known shipbuilding wood, Guapinol (also known as Jatobá, Latin: Hymenaea courbaril). This massive tropical hardwood was brought down in a landslide during the rainy season of last year not far away from the shipyard. Soon it will be arriving on site once it has been milled and cut to size on a larger-scale sawmill to become the statuesque stem of the first ship to ever set sail from the AstilleroVerde. 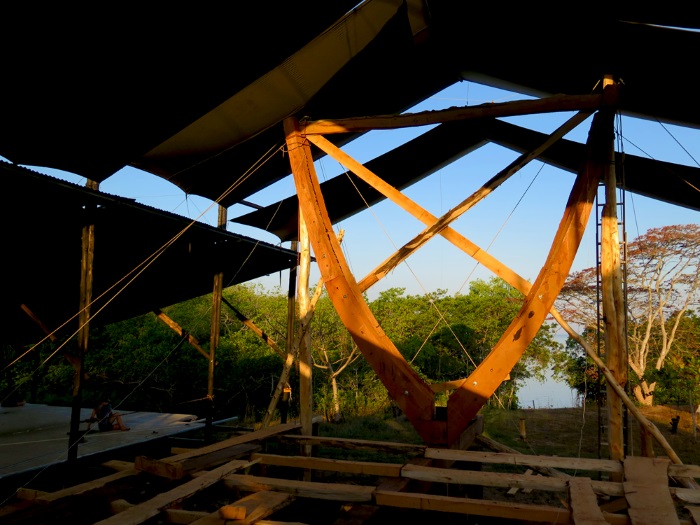 It is only together that we can #seashippingchange. The entire project is funded by people purchasing stock in the company. Progress from start to finish can not be achieved without the help of people, like you, investing in shares in the company, starting at only $1000 USD and increasing in increments of $100 USD. Around 23% of these have already been secured, so if you are interested, get in contact soon! To find out more or to become a fellow owner of Ceiba, email SAILCARGO INC. today [email protected]
Source: Sailcargo Inc.

2019-02-26
hellenicshippingnews.
Previous: Cyprus: Sailing to the next port of growth
Next: Saudi Arabia invites firms to prequalify for port project