How Can Shippers Navigate A ‘Perfect Storm’ In Their Supply Chains?

COVID-19 has wreaked havoc on supply chains around the world, and shows little sign of abating after a surge in new infections across Asia has enforced a partial shutdown of one of the world’s busiest container ports – Ningbo-Zhoushan. China’s Yantian port was also forced to close for over a month across May and June due to virus outbreaks.

Importers and exporters have already suffered during the pandemic, as raw material price rises and the much-publicized semiconductor shortage hamper recovery efforts and bring sizeable additional costs to bear and manufacturing or delivery delays.

The pressure is mounting on shippers’ logistics operations as a result of a “perfect storm” of negative headwinds. As our example illustration below displays, mapping the transportation path of a pair of shoes from port of origin in China to your doorstep, a combination of fluctuating transit times and increased costs are giving shippers significant headaches to resolve.

Our analysis shows that transit time from China has increased by 78%, while costs have also jumped over 21% compared with prior to the start of the pandemic.

From the outset, delays are increasingly likely. At the port of origin, we are seeing higher instances of ‘rolled’ containers, failing to ship on the intended day as a result of either capacity constraints on vessels, port congestion delays or skipped stops. This issue can be particularly acute for small shippers who can’t apply the same level of influence on carriers as bigger players. 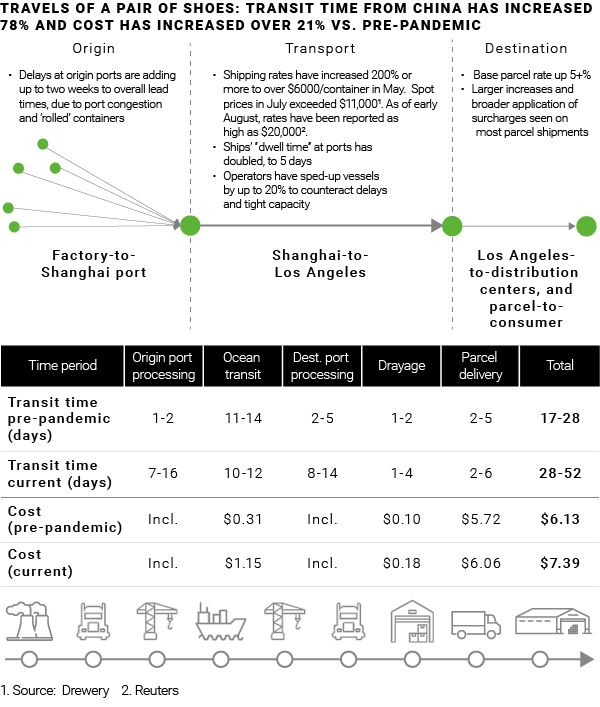 Shipping costs for ocean transit have skyrocketed, too – by more than 200% to over $6,000 per container for delivery into Los Angeles in May, for example, while spot prices in July exceeded $11,000, according to Drewery. A recent article from Reuters reported rates were tipping $20,000 in early August. However, ocean carriers are running vessels at speeds up to 20% faster than usually seen – which can mitigate previous delays encountered. These bottlenecks are arising due to general port congestion, equipment availability and driver shortages, all of which impact the time taken to process inbound vessels at ports, so much so that ships’ dwell times at ports has doubled to five days and continues to rise.

Once safely on land, drayage – the transportation of containers from a port to a local distribution center – has followed the trend of inflated costs within the trucking industry overall and delays in this area are also steadily increasing. Higher input costs and surges in demand have caused this leg of the transportation journey to soar by 80%.

On the approach to the last mile, it’s fair to say that increases in parcel delivery base costs have been nominal in comparison to those above. However, parcel carriers have been much more aggressive in the application of surcharges, including residential delivery fees and peak demand charges and these ‘shadow’ rate increases may lead shippers to experience higher price impact than the base rate increases would suggest.

How can shippers navigate the storm?
With multiple disruptions once again exposing the frailties of many global supply chains, pinching profitability at a time when recovering companies need it most, it’s clear that action needs to be taken to mitigate these business impacts. Shippers should now be firmly focused on:

• Adjusting safety stock and replenishment logic to account for the increased likelihood of longer lead times
• Reconsidering nearshore sourcing options, to counter the risk of sizeable delays to long-distance transit
• Diversifying shipping options to avoid acute risks (for example, spreading inbound flow across multiple ports, and establishing both a primary and secondary parcel carrier)
• Leveraging industry experts to advise on negotiations and relationships with carriers and associated metrics for success
• Applying a relentless focus on efficiency
• Ensuring that budgets and plans reflect the likelihood of higher shipping costs and longer lead times through at least 2022.
Source: By Brian Nemeth and Steve Scales. AlixPartners