Home / Commodities / Commodity News / How China Overpowered the U.S. to Win the Battle for Rare Earths

How China Overpowered the U.S. to Win the Battle for Rare Earths

It was Beijing’s decision almost 30 years ago to make rare earths a strategic material and ban foreigners from mining them that helped pave the way for China to elbow aside the U.S. as the world’s leading producer.

In the intervening period, as China tightened control of domestic output of rare earths — a broad group of 17 elements used in everything from electric vehicles to military hardware — the U.S. all but surrendered to China’s dominance of the sector. 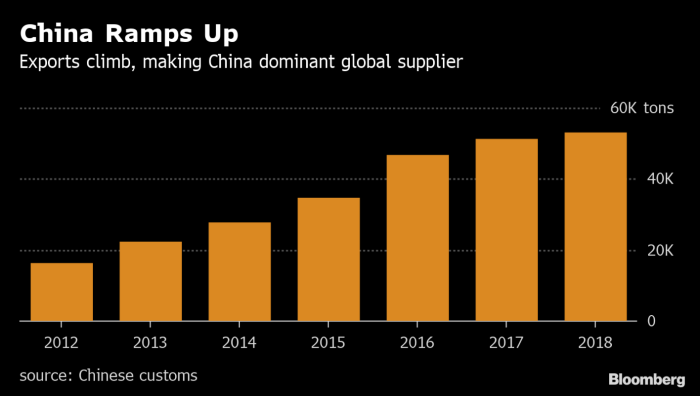 With China now accounting for 70 percent of global production, and only one U.S. mine in operation, American industries outside of defense have “no immediate avenues” to break their reliance on China for supply of rare earth elements, according to Citigroup Inc.

It’s why Washington is now facing a new front in its burgeoning trade war with the world’s second biggest economy, after Beijing signaled its intent to restrict exports of the critical materials. Here’s a look at the country’s reserves, export regime, dominant players and illegal activities. 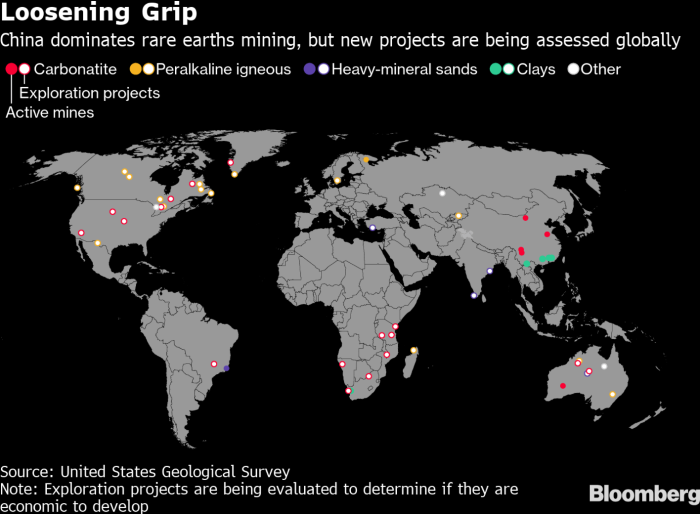 1. Six Dominant Producers
China consolidated its mining and separation companies into six licensed groups in 2016. Beijing granted the groups annual production quotas to better manage its strategic mineral resources and ensure the sustainability of the industry.

The country plans to cap domestic mining output below 140,000 tons by 2020 to preserve resources and will cut smelting and separation capacity by a third from 2015 levels to 200,000 tons, according to the industry’s five-year plan issued in 2016. It’s part of a drive to more than double the industry’s profit margin to 12%.

The following are the six major producers with 2018 quotas, according to the Ministry of Information and Technology.

2. Where Are the Mines?
Baiyun Obo in northern China’s Inner Mongolia, run by China Northern Rare Earth, is the world’s largest mine. It holds 83% of the country’s total reserves, mainly light elements. Mines in Shandong province have 8%, Sichuan has 3% and rest of the reserves are in southern provinces, mainly in medium-to-heavy forms, according to 2017 data on the China Rare Earth Industry Association website.

3. Exports, Imports
China has a surplus in light rare earths, which dominate its exports, but needs to import medium-to-heavy types to meet a domestic shortfall, according to SMM. On exports, the government doesn’t have any control on quantity or qualification as companies are only required to present sales contracts to receive licenses.

The country’s outbound shipments rose 3.6% to about 53,000 tons in 2018, according to Chinese customs data. Exports have been rising every year since 2013. The U.S. is one of the main destinations for permanent magnets and the country relies on China for 80% of its purchases.

China’s imports doubled to around 70,000 tons last year, making it a major importer for the first time, according to the country’s industry group.

4. Illegal Mining
While there’s no official data, the country is dogged by illegal exploration and production. A government crackdown has seen illicit production volumes fall significantly from almost being equal to sanctioned output of around 100,000 tons of oxide in the middle of the decade, according to Wu Xiaofeng, an analyst with SMM Information & Technology Co., without giving a specific estimates.

China was estimated to have produced 180,000 tons last year, compared with an official quota of 120,000 tons, according to a U.S. Geological Survey report that cited Chinese government data.

5. Consumption Areas
Permanent magnet materials account for 44% of China’s consumption, with polishing making up 10%, oil and petrochemical 9% and the rest used in metallurgical machinery, glasses, catalysts and lighting, according to SMM. 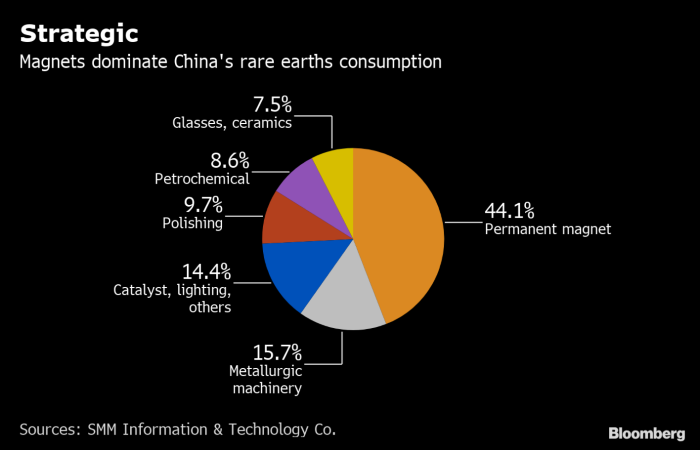 The market will be waiting eagerly for the next round of production quotas, which are due to be released later this month. This year’s first-round quota was relatively low given China’s total demand is expected to rise to 180,000 tons and companies may have to source supplies from overseas, Chen Zhanheng, vice secretary general at the rare earth association, said in March.
Source: Bloomberg