How does squeezing the life out of an economy help it revive?

That was one congressman’s assessment after protesting agriculturalists descended on Washington, D.C. in 1979, tossed a live goat over the White House fence, caused millions of dollars in damage with their tractors, and forced an awkward confrontation with central bankers over high interest rates that were making it hard to take out much-needed loans.

Little did they know things would only get worse.

By 1981, the country’s benchmark interest rate was raised to nearly 20%, forbidding enough to not just slam the brakes on the economy but also strip the tires and park it on cinder blocks. Borrowing money to buy a house could incur an 18.5% rate at that point, requiring nearly a fifth of what was owed to be regularly paid to lenders for the privilege of doing business with them – and making homeownership seem impossible.

The target of this painful effort? Rising inflation.

It worked. Core inflation in the US topped 13% in 1980 but was down to 3.2% by 1983, restoring faith and enabling growth.
Now, interest rates are again being hiked to beat back inflation. The benchmark rate in the US was increased last week by the largest amount since 1994. Slightly milder bumps were made recently in the UK, Canada, Brazil, and South Korea. More dramatic lifting was triggered in Argentina, Egypt, and Ukraine – a country trying to prevent the collapse of its currency after being invaded by Russia.

This method of fighting inflation has been likened to chemotherapy – dismal treatment that steadily lays waste to the body of an economy just enough to rid it of disease, but not enough to kill it.

If central bankers squeeze too much life out of an economy it can be difficult to revive, and may result in rampant unemployment. So they aim for a “soft landing” that blunts inflation without triggering a recession.

In the 1980s, Israel managed to use rate hikes to whittle rampant inflation down to almost nothing as unemployment rose only slightly. Other efforts have been less successful. According to a recent analysis, the US Federal Reserve has notched just one “true” soft landing out of nine interest rate hikes since 1961.

There are also concerns about the lack of precision involved in the policy move. It’s been noted that Russia is responsible for sending prices of food and fuel higher, for example, though raising rates won’t do much to target Russia’s war effort. But it will target the average person’s buying power.

Despite endless headlines about interest rates and inflation, general understanding of what’s at stake can be less than perfect. One poll found many Americans were “worried” about the idea of rising rates, but a quarter of Gen Z respondents were simply “confused.”

Rising rates can have implications for inequality. 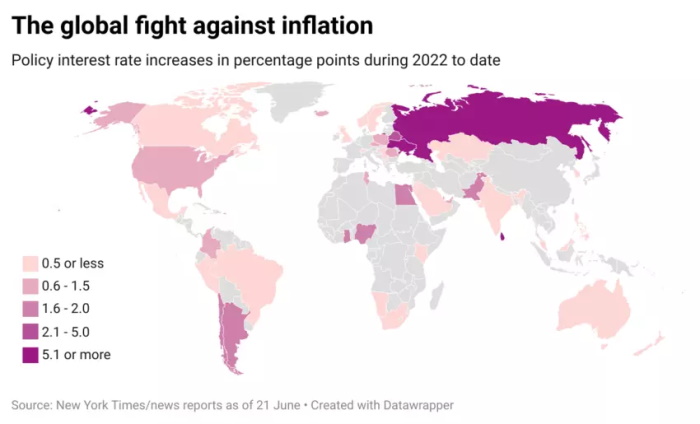 People who were unable to take advantage of low rates to buy a home may now be at an even sharper wealth disadvantage, and those with significant debt may be squeezed. An analysis in Australia last year suggested high household debt levels meant the benchmark interest rate couldn’t rise past 2% without “seriously” threatening consumer spending. The target for that rate was lifted to 0.85% earlier this month.

In the US, rate hikes are expected to hamper efforts to close racial unemployment gaps (the rate for Black Americans is about 6% compared with an overall rate of 3.6%). And in Denmark, rising rates would likely hit female business owners disproportionately hard.

Still, the alternative may be worse. Mounting inflation can trigger unrest; a cost-of-living protest in Brussels earlier this week drew 70,000 people. Central bankers need to demonstrate that somebody’s in control.

In the US in the early 1980s, Paul Volcker was suited for that job. The unflappable Federal Reserve Chairman smoked his way through cheap cigars while compelling concerned interviewers to retrieve his errant burning matches, and conquered a “crisis of credibility” with dramatic moves.

Now, some wonder if central bankers need to act more like Paul Volcker.

• If central bankers overreact and raise interest rates prematurely, according to a study detailed in this report, it can disproportionately impact employment prospects for women, Black people, and those without high school diplomas. (Kellogg School of Management)

• Every year, statisticians and experts in the UK gather to pick the “basket” of in-demand goods and services to be tracked to measure inflation, according to this piece. Added for 2022: antibacterial wipes and sports bras. Removed: men’s suits and coal. (The Conversation)

• In Israel recent interest rate hikes are meant to address issues including housing prices that have “skyrocketed” at their highest pace in more than a decade, according to this report. (Al Monitor)

• The European Central Bank intends to raise interest rates for the eurozone. This piece argues that simply raising the region’s key rate will not address its primary problem: higher energy prices due to Russia’s invasion of Ukraine. (Social Europe)

• The US Federal Reserve made an error by not starting to raise interest rates sooner, according to this analysis, though given the global nature of inflation it’s unclear how much of a difference that would’ve made. (The New Yorker)

• Where inflation is highest and lowest – this analysis pored over data from 44 different countries, and in nearly all of them consumer prices have increased substantially compared with pre-pandemic times. (Pew Research Center)

• This piece argues that a recent rate hike in the UK is self-defeating, because it eats away at real wages (particularly in a country where less than a quarter of workers are now unionized) and sucks the air out of the economy. (The Conversation)

On the Strategic Intelligence platform, you can find feeds of expert analysis related to Monetary Systems, Economic Progress, and hundreds of additional topics. You’ll need to register to view.
Source: World Economic Forum