Home / Oil & Energy / Oil & Companies News / How Much Oil Can Saudi Arabia Really Pump? We’re About to Find Out

How Much Oil Can Saudi Arabia Really Pump? We’re About to Find Out

Does Saudi Arabia have the extra oil?

For the first time since Saddam Hussein invaded Kuwait in 1990, Saudi Arabia could face the ultimate petroleum test: pushing its complex network of oilfields, processing plants, pipelines, tank farms and export terminals to the limit, pumping every possible barrel of oil.

Today another Middle East crisis is stretching the Saudi oil machine. U.S. sanctions on Iran are crippling exports from the Islamic Republic, prompting buyers to look to the world’s largest exporter for replacement barrels.

In a pithy description of its role during a supply crisis, Majid Al-Moneef, a former Saudi senior oil official, told U.S. lawmakers a few years back that “Saudi Arabia is the ‘Federal Reserve of oil,’” according to American intelligence cables published by Wikileaks.

Yet, unlike a central bank, the Saudis can’t print unlimited amounts of money. Their crisis-fighting tool is finite: a buffer of wells sitting idle in the desert. Use them now, and there’s nothing left for the next crisis.

“Any unforeseen outages such as those from Libya, Venezuela or elsewhere could potentially expose the lack of OPEC’s spare capacity — particularly of Saudi Arabia,” said Abhishek Deshpande, an oil analyst at JPMorgan Chase & Co.

The Saudis and their OPEC allies seem aware that using their spare capacity is a now a double-edged sword: it may cool down prices, but the impact could be limited by the risk-premium as the market worries about what’s left. Oil’s already passed the $80 mark despite assurances from Riyadh and its allies that it can fill Iran’s gap. Some traders are predicting oil could reach $100 this winter as the impact of sanctions ratchets up.

The United Arab Emirates’s energy minister, Suhail Al-Mazrouei, told reporters last week the cartel had to be cautious and not “overuse” its limited buffer. 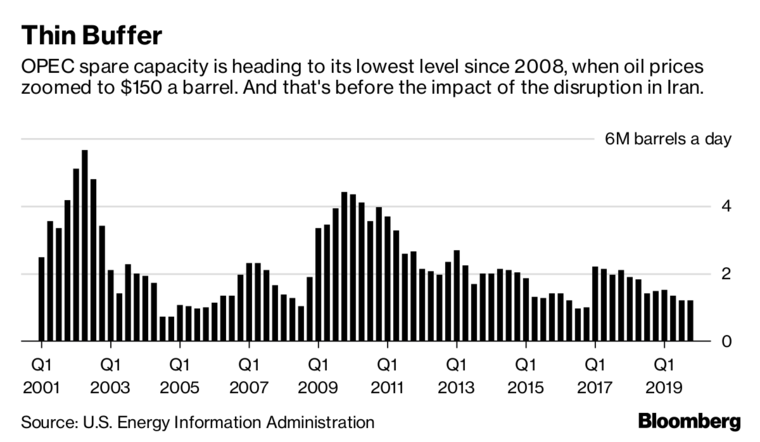 OPEC’s current spare capacity is relatively thin. The U.S. Energy Information Administration, puts it at just 1.4 million barrels a day, and estimates that it will drop to 1.2 million by late 2019, one of the lowest levels on record and similar to 2008 when oil prices zoomed to $150 a barrel.

Nonetheless, Riyadh says there’s lots of extra oil at hand. Energy Minister Khalid Al-Falih last week said more barrels can flow “within days and weeks.” Officially, the kingdom claims to be able to pump at a maximum of 12.5 million barrels a day, up from a near-record 10.4 million produced in August — spare capacity of more than 2 million barrels.

“The market is discovering that margins are not so high,” Patrick Pouyanne, the head of French oil giant Total SA, said in an interview.

The energy industry is increasingly worried. The angst was evident at the annual Asia Pacific Petroleum Conference — one of the biggest annual gatherings of the oil-trading industry — this week in Singapore. In client meetings, conferences and the round of evening cocktail parties, executives were privately doubtful the Saudis can quickly lift output beyond 11 million to 11.5 million barrels a day — not enough to replace Iran. 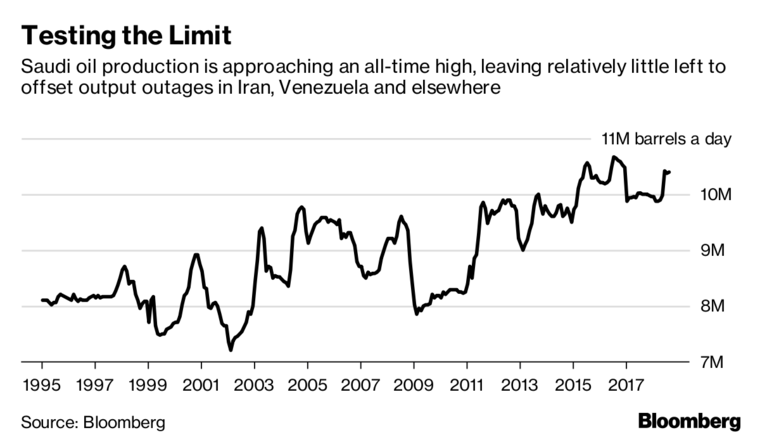 Spare capacity is a fluid concept. For some, it means extra output that can flow at the flick of a switch. Realistically, most industry executives define it as production that can be brought onstream in 30 days, and then sustained for a at least three months. Beyond that, some of the spare capacity is simply oil on the ground that can be pumped by drilling new wells, requiring more time.

Over the years, Saudi Arabia has been cagey about how much of its spare capacity falls in each bucket. But Ali Al-Naimi, who was oil minister for nearly 25 years until 2016, offered a glimpse in 2012.

There’s one more complication: of the 12.5 million barrels a day, only 12 million is controlled directly by state-owned company Saudi Arabian Oil Co., or Aramco. The other 500,000 barrels a day lies in the so-called Neutral Zone shared with Kuwait. But the region hasn’t produced a single barrel for nearly two years due to a dispute between Kuwait and Riyadh.

Beyond production, Riyadh has another line of defense to meet a supply outage like Iran: a vast network of storage facilities, both in the kingdom and overseas, that can be drawn down temporarily.

Al-Falih said last week that “as the supply shortfalls were a concern” for customers, “we did make a determined effort to top up the storage that was not already full.” As well as domestic storage, Saudi Arabia has filled up its strategic storage in Okinawa, Japan; Sidi Kerir in the Mediterranean coast of Egypt; and in the European oil hub of Rotterdam.

Officially, Saudi Arabia declared stocks of 229 million barrels in July, the latest data available, down from a record high of 329 million in October. Yet again, as with the spare capacity data, the market also has its doubts. Antoine Halff, an executive at Kayrros, a company that uses satellite data to track storage, takes issue with the Saudi numbers.

“From the sky, we see 70 million barrels in storage,” he said, out of the 125 million barrels that the kingdom can store in 231 tanks spread across with terminals and refineries. “We don’t see anything extraordinary either in Saudi overseas tanks.”

The naysayers should be wary, however. The kingdom has been here before, and proved its doubters wrong: it tapped its spare capacity and pumped more than expected during the Iranian revolution in 1979, the Iran-Iraq war between 1980 and 1988 and during the first Gulf War in 1990-91. To a lesser extent, it also tapped its spare capacity during turmoil in Venezuela in 2003.

Moreover, Riyadh and the rest of OPEC are taking measures to reinforce its production machine: it has brought on stream 300,000 barrels a day of new production from the Khurais oilfied. The expansion was meant to compensate declines elsewhere, but over the short-term it could help to boost spare capacity.

Yet, despite the efforts, the Saudis and OPEC face a huge challenge to replace Iran.

Pouyanne, the head of Total, puts it in simple terms: “You need to mobilize the wells, the rigs… It’s not immediate. In our industry, you don’t push a button and then oil flows. It’s more complex!”
Source: Bloomberg

2018-10-01
hellenicshippingnews.
Previous: Power to the Permian? Spotty at Best, Outrun by a Fracking Boom
Next: Brent oil hits highest since 2014 before U.S. sanctions on Iran bite