How Provoking Iran Can Blow a Hole in Oil Flows

The capture of the Stena Impero shows just how easy it is for Iran to hamper shipping through the Strait of Hormuz. At the moment, this is a particularly British problem, but were it to widen, the implication for oil flows could be huge.

Why was a U.K. flagged vessel attempting to transit the waterway without close naval escort after specific threats had been made against British ships? It appears on the face of it to have been a very rash decision, although whether HMS Montrose could have prevented the Iranian action without opening fire remains an unanswered question. The use by Iran’s Republican Guard of airborne forces as well as boats suggests that this was a much more serious attempt than the one against the British Heritage, which now looks more like a probing mission intended to assess the nature of a British response. 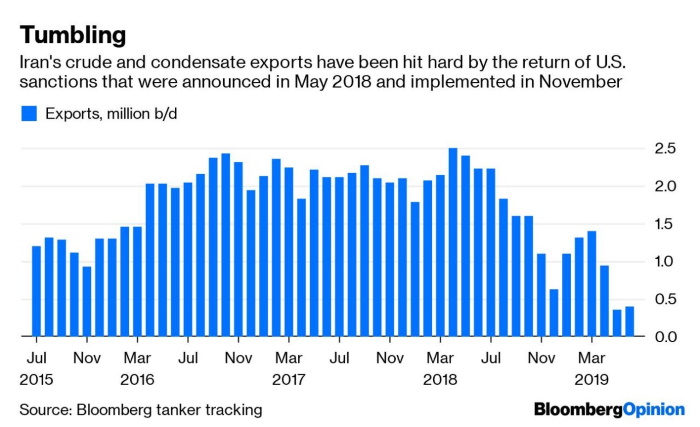 The capture of the Stena Impero was a direct tit-for-tat response to the impounding of Iranian supertanker Grace 1 off Gibraltar earlier this month, but other actions haven’t been. The MT Riah, a small oil tanker that was taken last week, was either towed into Iranian waters for repair after suffering technical difficulties, according to Iran’s foreign ministry, or it was arrested for smuggling Iranian fuel, according to the Revolutionary Guards. Iraqi-owned, Panamanian-flagged and chartered by a company based in the U.A.E. to carry fuel to Somaliland, that ship has no British connection.

Iran’s actions are understandable, though not forgivable, in response to the unilateral rejection of the nuclear deal by the U.S. and, more importantly, President Donald Trump’s decision to force everybody else to toe his line. Although the other parties to the Iran nuclear deal – the European Union, Russia and China – want to keep it alive, they have been almost powerless to preserve it in any meaningful way. 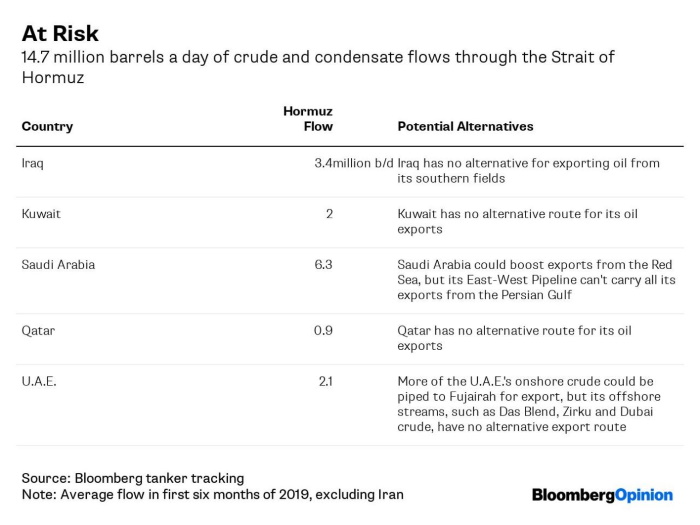 By imposing extra-territorial sanctions on all buyers of Iranian crude with the threat of denying them access to U.S. dollars and the American banking system on which international trade depends, Trump has effectively forced everyone else to stop buying Iran’s oil. To expect Iran to abide by its side of the nuclear deal without receiving any of the benefits of trade and investment that it was due to receive in return is naive.

But this creates a problem for the European and Asian countries that depend on the flow of oil through the Strait of Hormuz. By joining a proposed U.S.-led coalition to protect shipping through the waterway they would, from Iran’s perspective, be driving another nail into the coffin of the nuclear deal. And that may provoke Iran to respond by widening its harassment of shipping in the Strait of Hormuz.

That would jeopardize all of the oil exports from southern Iraq, Kuwait and Qatar, along with a significant proportion of those from Saudi Arabia and the United Arab Emirates. These have averaged about 14.7 million barrels a day in the first six months of the year and most of that volume can’t be exported any other way.

Iraq no longer has the ability to move crude from oil fields in the south to its northern export routes after its Strategic Pipeline was destroyed during the U.S.-led invasion of 2003. Saudi Arabia could use its East-West Pipeline to move crude to export terminals on the Red Sea. It has a nameplate capacity of 5 million barrels a day, but last year carried only around 2.1 million barrels, much of which was delivered for processing at refineries at Yanbu. The spare capacity in the line is not enough to divert even half of Saudi Arabia’s crude exports from the Persian Gulf. 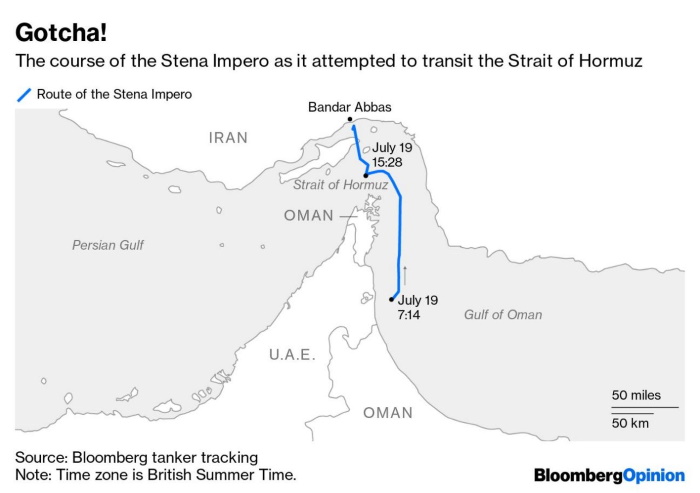 An escalation of tanker harassment could also impact liquefied natural gas exports from Qatar, which accounts for about a quarter of global LNG supplies. This is a bit less likely, as Qatar has good relations with Iran, but it can’t be ruled out.

Putting private armed guards on tankers and signalling their presence may have deterred some of the piracy off the east coast of Africa, but it is unlikely to have a similar effect on Iran’s Revolutionary Guard. Furthermore, any such forces would be foolish to open fire on an Iranian patrol boat.

Should Iran’s harassment of tankers escalate, the oil importing and shipping countries may have little option other than to align themselves with the Americans, at least as far as protecting vessels is concerned. But if they’re going to use naval ships to protect tankers, they’ll have to be prepared to use their weapons, and that is an escalation that everyone wants to avoid.

With nearly 15 million barrels a day of crude flows at risk, it is a step that may have to be taken, unless both sides step back from the brink and work to find a diplomatic solution. Iran may not close the Strait of Hormuz, but will probably step up its harassment of ships passing through it, raising both the cost and the risk of carrying oil from the Persian Gulf. President Trump is not going to starve Iran to the negotiating table, so he’s going to have to find a way to entice them, if he wants to avoid this conflict escalating.
Source: Bloomberg