How Solid-Oxide Fuel Cells Could Save the Maritime Sector, Reports IDTechEx

It is becoming prosaic to say there is no ‘silver bullet’ for marine decarbonization. But it might be fitting to say ‘multiple silver bullets’ are emerging since between batteries, fuel cells (FC), green hydrogen, green ammonia, e-methane and carbon capture, decarbonization across all marine subsegments might just be possible. IDTechEx sees green fuels as one of the most promising solutions to decarbonize large sea-going vessels.

While hydrogen PEMFC are the most commercially available and the focus of most suppliers, their Achilles heel is hydrogen. Hydrogen has a volumetric energy density of 8.5GJ/m3 as a liquid (–253C), with the bar set by diesel at 33GJ/m3 (STP). Per ship mile, liquid hydrogen, therefore, requires much more storage space, while reaching/ maintaining –253C is both difficult and energy intensive. Nevertheless, maritime PEMFC markets are growing rapidly today, particularly in inland and coastal sectors where ‘opportunity refueling’ has more potential. 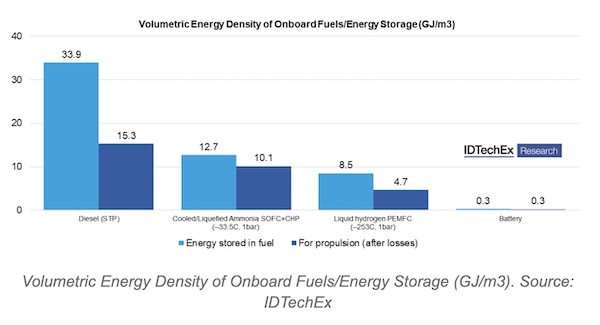 SOFCs solve many of these pain points. They are fuel flexible and can be operated with ammonia, hydrogen, LNG, LPG, methanol, ethanol, and more at efficiencies of >80% with combined heat and power (CHP) processes. This is a large increase over typical PEMFC and marine diesel engine efficiencies of 55% and 45%, respectively.

Liquid ammonia is an attractive fuel choice by many metrics. It has an energy density of 12.6GJ/m3 (–33.5C), which, with 80% SOFC+CHP efficiency, results in onboard storage requirements much more comparable to diesel. At –33.5C, ammonia is easier and less energy-intensive to liquify and store than LNG and hydrogen at –161C and –253C, respectively. In fact, fossil ammonia today is already traded in large volumes by sea for the mining and fertilizer industries. Most importantly, with a makeup of nitrogen and hydrogen (NH3), ammonia offers a pathway to zero carbon and methane emissions.

The advantages of ammonia and ammonia-fed SOFC+CHP are naturally generating industry excitement. Indeed, the first ammonia-powered SOFC vessel in the world is scheduled for operation in 2023 – an offshore supply vessel called Viking Energy, which will be retrofitted with a 2MW SOFC system from Alma Clean Power (although it will keep its engine). Green ammonia will be supplied by Yara, allowing up to 70% of the power requirements to become zero emissions.

So, what is the catch? There are some commonly cited technical disadvantages for SOFC, including long start-up times and a poor dynamic response (a result of 800C operation). However, these issues are manageable in the marine environment when paired with a battery system and a use-case of long voyages out at sea (long, continuous operation). The primary drawbacks are simply that mega-watt SOFCs and green ammonia are not readily available today. Few SOFC suppliers exist, creating a bottleneck and driving costs, and demonstrator projects for green ammonia are in their infancy and reliant on green hydrogen production, again driving costs. Viking Energy is a custom pilot project made possible through 75% EU funding (~10 million euros).

Overall, batteries and hydrogen and ammonia fuel cells have high potential to create long-term pathways to zero emissions. It is easy to envisage a future with broader adoption of hydrogen PEMFC and batteries in the mid-term and ammonia SOFC adoption in the long term. What is clear is that lowering emissions in the maritime sector will continue to rely on tremendous investment, financial support, and policy drivers from both the public and private sectors.
Source: IDTechEx