How to Sink the Pirates Plaguing West Africa

Remember those Somali pirates? Earlier this decade, they brazenly hijacked giant oil tankers, demanded ransoms in the millions of dollars, and gave Tom Hanks yet another chance to play the everyman overcoming a life-defining crisis. Now, thanks to a multinational naval crackdown and tighter security measures by shippers, they’ve been forced back to dry land.

But as often happens with crime waves, the problem wasn’t really eliminated; it just popped up in a more vulnerable location. And for pirates, the treasure hunt now takes place in the Gulf of Guinea, which stretches off West Africa from Senegal to Angola, nearly 4,000 miles of shoreline.

Last year, 40 percent the world’s reported incidents of seaborne attacks occurred there, including every ship hijacking and 78 of the 83 crew members taken for ransom. In reality, things are probably much worse: The International Maritime Bureau, which tallies these statistics, also estimates that half of incidents go unreported. The waters off Somalia, meanwhile, had two attacks total reported. 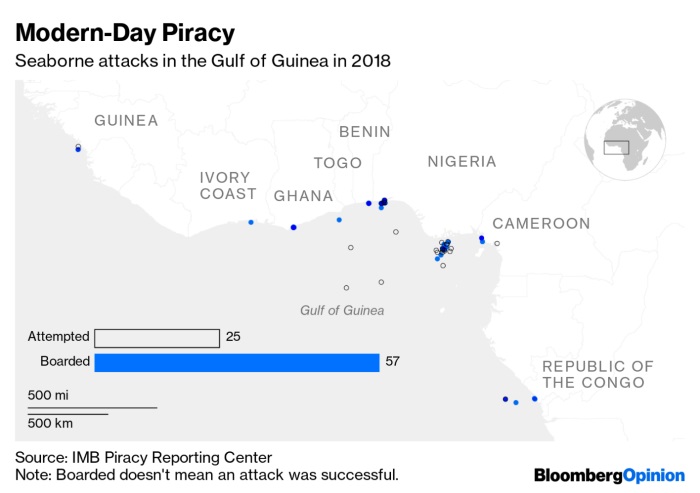 No ship has been unluckier than the fuel tanker MT Maximus, which was taken by pirates in the gulf three times between 2011 and 2016. At least the final group of modern-day buccaneers had a sense of humor: They painted over the ship’s name on the hull and renamed it the Elvis 3.

The background causes for this West African crime spree are largely the same as what spurred the Somali pirates off East Africa – lack of jobs, food shortages, armed conflict, corrupt or failed governance – but the crimes themselves are very different. While the Somalis often asked for millions of dollars to release their hostages or hijacked ships, the Gulf of Guinea culprits more typically seek only a few thousand, which many oil and shipping companies simply pay and write off as a cost of doing business.

And while the Somalis made daring attacks in wooden fishing boats on huge oil tankers or luxury yachts in deep sea, the West Africans more typically use inflatables towed by trawlers and attack softer targets. These include the ships that ferry men and equipment to and from the gulf’s offshore oil rigs, as well as slow-moving tankers and cargo ships as they enter and leave major ports such as Cotonou in Benin, Abidjan in Ivory Coast and the Niger Delta of Nigeria.

But even these smaller-scale crimes add up: According to the nonprofit Oceans Beyond Piracy, the economic cost of seaborne crime off West Africa – including such things as lost goods, contracted security, insurance and “captivity pay” to crew members held hostage – totaled $818 million in 2017. (It’s suspected that in many cases the ships’ crews are in cahoots with the pirates, in exchange for a cut of the loot.)

And, as my Bloomberg Opinion colleague Admiral James Stavridis likes to say, the oceans are “the world’s largest crime scene,” in large part because many gangs involved in hijacking and kidnapping are often engaged in other illicit activities: illegal fishing, human trafficking, and smuggling of arms, precious gems and drugs. Two-thirds of South American cocaine that ends up in Europe transits through West Africa, according to the 2017 United Nations World Drug Report.

Given the importance of maritime commerce to these nations – oil accounts for about 10 percent of Nigeria’s economy and 90 percent of its foreign exchange – one would think they would clamp down harder. But there are a number of catches, including that each of the roughly 15 nations on the coast has its own claim to sovereignty or a sphere of influence over the waters of its shores, many of which overlap. The nations also have varying legal systems based on the traditions of the European colonial powers that once controlled them. The result is a logistical and law-enforcement mess.

The best effort to overcome these hurdles was the Yaounde Code of Conduct, a 2013 pact that introduced a common code for fighting piracy and established a regional coordination center for maritime safety in Yaounde, Cameroon. Another big step has been a series of naval exercises involving the gulf’s nations, European countries and, most importantly, the U.S. Navy and Coast Guard. The biggest, held annually since 2010, is called Obangame Express. This year’s, co-hosted by U.S. Naval Forces Africa and the Nigerian navy, involved 33 nations, 2,500 personnel, 95 ships and 12 aircraft.

“Comparing the exercise from 2010 to now is night and day,” said Admiral James G. Foggo III, commander of all U.S. naval forces in Europe and Africa. In his words, those nations had suffered from “sea blindness.”

“When we began the exercise in 2010, many African countries lacked the facilities, capacity, ships or maritime operation centers to monitor what was occurring within their coastal domains,” Foggo told me in a recent telephone call. “Today, the West African nations have a series of facilities and radars that enable them to coordinate and collaborate.” 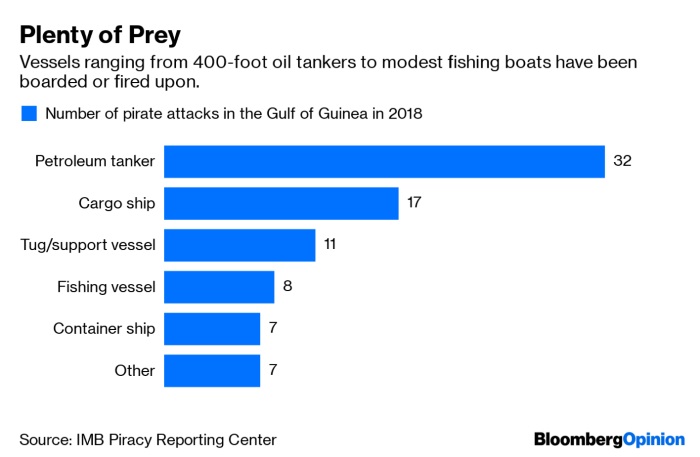 Foggo also emphasized that while ending the attacks is vital, it needs to be a “proportionate response”: This isn’t about Navy Seal sharpshooters picking off pirates like the Somalia effort, but calm negotiation, capture and prevention. One goal should be no deaths.

Still, given the vast size of the gulf and relative poverty of many of the countries on it, all these efforts can go only so far. What more could be done?

Many of the gulf countries are game to take on the pirates – the tiny, impoverished island nation of Sao Tome and Principe is a prime example – but don’t have the money for ships, sailors or even gasoline. Nigeria is the only state with a powerful military, but it can’t be expected to shoulder the burden alone. In May the navy of Togo showed its stuff, quickly recovering the hijacked petroleum tanker Djetona 1 and apprehending eight pirates who had boarded from a rented canoe.

The European Union has helped out, most recently allotting $10 million on a project to improve port security and $7 million to improve cooperation in combating drug smuggling, among other long-term initiatives. Some Western nations have donated decommissioned military vessels, but this isn’t effective unless they can provide continuing training for crews, money for fuel and a supply chain for replacement parts. It would also help if the oil, shipping and fishing companies would report all incidents so antipiracy groups could have an accurate picture of the scope of the problem.

But in the end, as with so many of Africa’s ills, there will be no end to it without economic development. Nine of the Gulf of Guinea’s countries rank among the poorest 30 in the world, according to the World Bank. If you want to get the pirates off the high seas, you’ll have to get them jobs on the dry land.
Source: Bloomberg

2019-07-08
hellenicshippingnews..
Previous: China and Japan Stepping Up Efforts to Keep Korean Shipbuilders in Check
Next: Alfa Laval has Signed an Agreement for PureBallast Worth SEK 210 Million