The 77th meeting of the IMO Marine Environment Protection Committee (MEPC) takes place in online format this week. The meeting follows the COP 26 climate summit held earlier this month in Glasgow, Scotland. The summit has increased pressure on IMO member states to raise the level of ambition expressed in the initial IMO GHG strategy that was adopted in 2018. In his remarks at the opening of MEPC 77, IMO secretary-general Kitack Lim encouraged governments to consider further action and chart the way forward for the decarbonisation of international shipping. 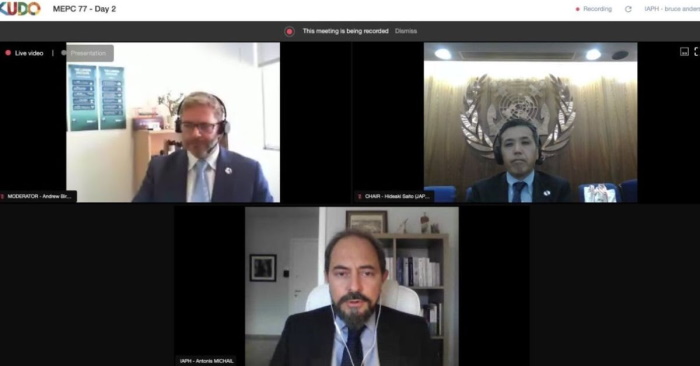 IAPH participates in the discussions with a delegation of members, led by technical director Antonis Michail. Antonis presented two statements on behalf of IAPH (photo), supporting proposals to set a target for zero emission shipping by 2050 and review the IMO initial strategy accordingly. He also reiterated the view that the implementation of a global market-based measure (MBM) by 2025 at the latest is essential for the commercially viable and timely introduction of low- and zero-carbon fuels. Antonis also referred to the submission IAPH made for MEPC 77, calling for a significant share of MBM-generated revenue to be allocated to land-side infrastructure, including port-related investments, in developing countries in particular, in order to facilitate the global deployment and use of low- and zero-carbon fuels and to contribute in parallel to an equitable energy transition of shipping. MEPC 77 concludes this Friday. Members of the IAPH Climate and Energy Committee will be receiving an overview with the main results of the meeting, to be followed by a more in-depth report later.
Source: IAPH