Enrique K. Razon, Jr., President and Chairman of ICTSI said: “ICTSI’s performance in the first half of 2019 has been very positive. The group’s focus on generating high quality earnings from our ports, ramping up activities at our newer terminals and strong cost control has enabled us to continue to deliver on our strategic objectives. Our business remains relatively unscathed by current geopolitical headwinds, but we remain vigilant and continue to monitor the situation closely. ICTSI is a robust business, strongly placed for the second half and the Board remains confident of the future.”

International Container Terminal Services, Inc. (ICTSI) today reported unaudited consolidated financial results for the first half of 2019 posting revenue from port operations of US$751.8 million, an increase of 14 percent over the US$661.8 million reported for the first six months of 2018; Earnings Before Interest, Taxes, Depreciation and Amortization (EBITDA) of US$424.4 million was 19 percent higher than the US$356.1 million generated in the first half of 2018. Net income attributable to equity holders of US$128.5 million grew by 42 percent compared to the US$90.2 million earned in the same period last year mainly due to improved operating income contribution from the terminals in Iraq, Australia, Democratic Republic of Congo and Subic in the Philippines; the continuing ramp-up at the new terminals in Papua New Guinea; and a decrease in equity in net loss at Sociedad Puerto Industrial Aguadulce S.A. (SPIA), its joint venture container terminal project with PSA International Pte Ltd. (PSA) in Buenaventura, Colombia. The increase was partially tapered by a non-recurring gain from the interest rate swap related to the pre-payment of the project finance loan at its terminal operations in Manzanillo, Mexico in 2018. Excluding the non-recurring gain in 2018, consolidated net income attributable to equity holders would have increased by 47 percent in 2019. Diluted earnings per share was 65 percent higher at US$0.048 from US$0.029 in the first half of 2018.

For the quarter ended June 30, 2019, revenue from port operations increased nine percent from US$336.4 million to US$368.0 million; EBITDA was 13 percent higher at US$201.9 million from US$178.5 million; and net income attributable to equity holders was up 14 percent from US$49.4 million in 2018 to US$56.1 million in the same period in 2019. Excluding the non-recurring pre-termination gain from the interest rate swap at CMSA in Manzanillo, Mexico in 2018, consolidated net income attributable to equity would have increased by 20 percent in 2019. Diluted earnings per share for the quarter was 22 percent higher at US$0.020 compared to US$0.016 in 2018. 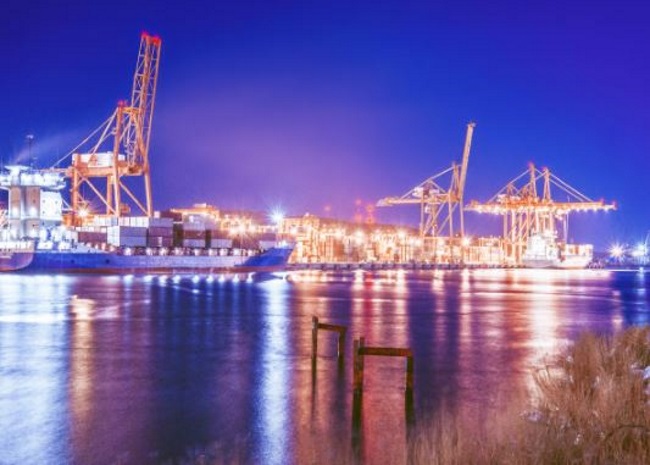 ICTSI handled consolidated volume of 5,041,916 twenty-foot equivalent units (TEUs) in the first six months of 2019, seven percent more than the 4,714,255 TEUs handled in the same period in 2018. The increase in volume was mainly due to continuing ramp-up at ICTSI’s operations in Melbourne, Australia and Manzanillo, Mexico; improvement in trade activities in Subic, Philippines Matadi, Democratic Republic of Congo and Rijeka, Croatia; new shipping lines and services in Gdynia, Poland; and the new terminals in Lae and Motukea in Papua New Guinea. For the quarter ended June 30, 2019, total consolidated throughput was seven percent higher at 2,563,244 TEUs compared to 2,388,715 TEUs in 2018.

Gross revenues from port operations for the first half of 2019 increased 14 percent to US$751.8 million compared to US$661.8 million reported in the same period in 2018. The increase in revenues was mainly due to volume growth; tariff adjustments for certain services at multiple terminals; new contracts with shipping lines and services; continuing ramp-up at ICTSI’s operations in Melbourne, Australia and Manzanillo, Mexico; and the contribution from the Company’s new terminals in Lae and Motukea in Papua New Guinea. For the second quarter of 2019, gross revenues increased nine percent from US$336.4 million to US$368.0 million.

Consolidated cash operating expenses in the first half of 2019 was five percent higher at US$232.0 million compared to US$221.2 million in the same period in 2018. The increase in cash operating expenses was mainly due to higher volume; government-mandated and contracted salary rate adjustments at certain terminals; increase in information technology-related and business development expenses; and the cost contribution of the new terminals in Lae and Motukea in Papua New Guinea; partially tapered by continuous monitoring of cost optimization measures and favorable translation impact of Pakistani Rupee expenses at Karachi, Pakistan, Australian dollar expenses at Melbourne, Australia and Brazilian Reais expenses at Suape, Brazil.

Consolidated financing charges and other expenses for the first half was marginally lower at 0.6 percent from US$60.0 million in 2018 to US$59.6 million in 2019 primarily due to the lower interest expense resulting from the prepayment of the CMSA project finance loan in May 2018 and lower borrowing cost tapered by the new loan drawdowns in the first half of 2019.

Capital expenditures excluding capitalized borrowing costs for the first six months of 2019 amounted to US$120.5 million, approximately 32 percent of the US380.0 million capital expenditures budget for the full year 2019. The estimated capital expenditure budget will be utilized mainly for the ongoing expansion projects in Manila, Mexico and Iraq; equipment acquisitions and upgrades; and for maintenance requirements.

ICTSI is a leading global developer, manager and operator of container terminals in the 50,000 to three million TEU/year range. ICTSI operates in 19 countries across six continents and continues to pursue container terminal opportunities around the world. ICTSI has long held to the principle of sustainability and is committed to the continuing effort to more systematically and deeply integrate sustainability principles in strategic visioning, planning, and execution – creating positive impact across operations, across borders, and across generations. 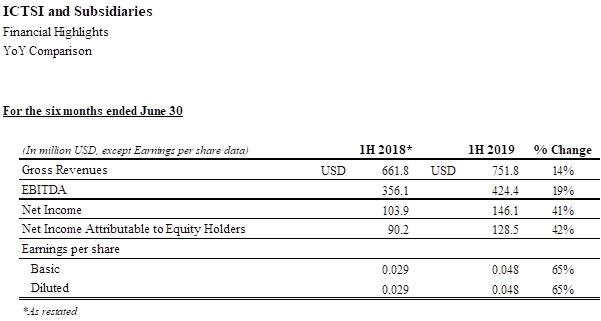