TecPlata, the new container terminal located in Argentina’s Puerto de La Plata, recently began operations, with an opening ceremony that was attended by the vice governor of the province of Buenos Aires, the Minister of Production and several other national, provincial and municipal officials.

The opening rites were highlighted by the arrival of Jacarandá, a vessel of Log-In, a Brazilian shipping line specializing in door-to-door logistics solutions which recently signed an agreement with TecPlata, a subsidiary of Philippine-based port operator International Container Terminal Services Inc. (ICTSI). 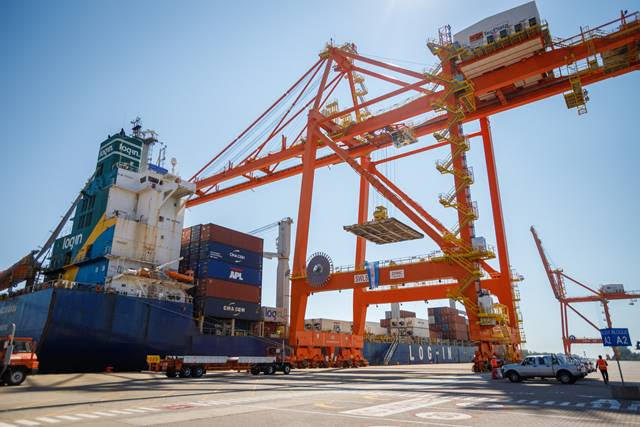 The arrival of the vessel, which has an overall length (LOA) of 218 meters and a cargo capacity of almost 38 tons, marked the start of Log-In’s fortnightly operations at the terminal.

“This a first step for the company, and we firmly believe that this will pave the way for new agreements with more operators to maximize our current installed capacity of 450,000 TEUs,” said Bruno Porchietto, TecPlata CEO. He added: “The terminal may also be expanded to twice its existing capacity to over 1 million TEUs.”

Referring to the start of TecPlata’s operations, he said: “This was a long-awaited milestone and, from hereon, our terminal will stand apart for its efficiency, competitiveness and transparency.”

TecPlata, an investment of US$450 million, is the most modern port in Argentina equipped with the latest infrastructure, equipment and computer systems in the industry. It is located only 60 kilometers from Buenos Aires, the country’s capital, and has a total area 41 hectares, 25 hectares of which have been allotted for containers.
Source: ICTSI

2019-04-10
hellenicshippingnews..
Previous: Townsville is first Port of call for new vessel out of Japan
Next: Private sector takeover of Hanjin Heavy assets will take some time