China’s ports handle nearly a third of global container traffic and it has the largest merchant fleet in the world in terms of the number of ships owned.

But given the size of its fleet and the number of ships that pass through its ports, China plays a surprisingly small role in bonded bunkering – the provision of fuel sold tax-free to ships travelling between countries across international waters.

It is not China but Singapore that dominates Asian bunkering. Just under 50 million metric tons of bunker fuel were sold in Singapore last year, making it the world’s largest bunkering hub. No other port comes close. Rotterdam and Fujairah, the world’s second- and third- largest bunker ports, each sold under 10 million mt last year. In comparison, China’s total bunker fuel demand is about 12 million mt/year across all its ports.

Most of the world’s shipping fleet runs on high sulfur fuel oil – a cheap, dirty byproduct of the refining process. Asian refineries’ output of HSFO is not enough to meet regional demand. S&P Global Platts Analytics estimates that Singapore imported nearly 90% of its bunker fuel in 2018 with just under two thirds coming from outside the region. In the first three months of 2019 just under a quarter of Singapore’s imports came from Russia, and just over a quarter from Europe and the Americas, with the remainder being supplied by the Middle East and other parts of Asia.

Singapore’s dominance
The key to Singapore’s dominance of Asian bunker markets is its huge commercial storage capacity and fuel blending capabilities. This allows it to take in arbitrage cargoes of different qualities from across the globe and blend them to meet requirements for end users throughout Asia.

Because of its pivotal role suppling the region, Singapore is also the Asian price benchmark for bunker fuel. The pricing for cargoes sold to Chinese importers is typically based on S&P Global Platts Singapore benchmarks. Imports make up around 90% of China’s bonded bunker fuel supply, with Singapore and Malaysia being the main supply sources.

But could IMO 2020 – technically the implementation of Annex VI of MARPOL, a global protocol to reduce pollution from ships – erode Singapore’s bunkering dominance? Could it see a Chinese port, or ports, rise to become a rival bunkering center, and even challenge Singapore‘s status as the regional benchmark?

IMO 2020 will limit maximum sulfur content in marine fuels to 0.5% from 3.5%, effective January 1, 2020. This will require all ships to either use fuel that meets the new sulfur cap, or to install scrubbers to reduce emissions if they continue using HSFO.

So far, only a few shipowners have been willing to commit the considerable capital investment required to install scrubbers. Platts Analytics estimates that scrubbers will only be able to scrub 13-15% of global bunker demand by January 2020, meaning most ships will have to use 0.5% sulfur marine fuel when the protocol comes into effect.

At the beginning of June, 0.5% sulfur marine fuel was fetching a $135/mt premium to Platts 380 CST high sulfur fuel oil, up from $44.50/mt on January 2, 2019 when Platts started assessing cargoes of IMO-compliant bunker fuels.

But IMO 2020 also presents an opportunity for Asia’s largest refiners, notably those in China. The country is second only to the US in terms of refining capacity, much of which is equipped with secondary processing units capable of producing low-sulfur products from high-sulfur crude.

Currently Chinese refiners and blenders are unable to claim back consumption and value-added taxes on domestic fuel sold as bonded bunkers. This puts them at a significant cost disadvantage compared with their peers in other locations such as Singapore. However, the government is expected to announce changes later this year that will allow refiners and blenders to claim back the tax on bonded low-sulfur marine fuel sales.

China National Petroleum Corporation recently announced it plans to produce 4 million mt/year of low-sulfur marine fuel, while Sinopec, the world’s largest refiner, plans to produce 10 million mt/year of IMO compliant marine fuel by 2020. Sinopec will turn out IMO compliant marine fuel at 10 of its coastal refineries, with three having already started as of July 2019. This will likely involve processing lower sulfur crude and desulfurizing residues, then diverting feedstock including vacuum gasoil away from the secondary units into the marine fuel blending pool.

But this rapid transition brings its own risks. Higher prices for IMO-compliant fuels will incentivize production. But if the spread between 0.5% sulfur marine fuel and HSFO holds at elevated levels over a sustained period, this will shift the economics in favor of installing scrubbers and burning HSFO, reducing demand for low-sulfur fuel. 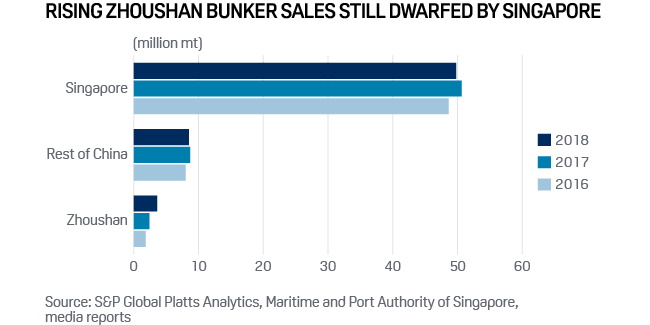 China has quite restrictive policies around blending imported fuel components. The consequent lack of ability to mix fuels to produce IMO compliant 0.5% sulfur fuels may make it hard for many Chinese ports to compete with established hubs like Singapore. The exception is Zhoushan, part of the Zhejiang Free Trade Zone. China’s commerce ministry relaxed blending restrictions in the FTZ in July 2018 to allow locally registered oil companies to blend imported components for sale as bonded bunker fuel.

Zhoushan, located between Shanghai and Ningbo ports, is already China’s largest bunkering hub. Sales of bonded bunkers reached 3.6 million mt last year, accounting for 30% of China’s total. It also has tank capacity to rival Singapore. Zhoushan boasts 22 million cubic meters of storage, just above the 21.7 million cubic meters found in Singapore. But the headline numbers don’t tell the whole story and just over a third of Zhoushan’s storage is accounted for by the national strategic petroleum reserve.

However, with a further 10 million cubic meters under construction in Zhoushan, it is very likely that there will be sufficient commercial bonded storage capacity to store and blend IMO compliant marine fuel as bonded bunkering and blending develops and the market for low sulfur marine fuels at Zhoushan grows.

On paper Zhoushan looks like a good bet. It is at the nexus of bunker supply and East Asian shipping demand. Physical storage and government policies are in place. And there is plenty of refinery supply to support the port’s evolution into a major low-sulfur bunkering location. If Zhoushan manages to take advantage of the disruption caused by IMO, its bunkering volumes are unlikely to rival Singapore’s any time soon, but it may not be long before the port becomes as important as other bunkering hubs like Rotterdam or Fujairah.

It is the market that will ultimately decide whether Zhoushan evolves into a major bunkering location, or even a regional price benchmark for bunker fuel.
Source: Platts