Genscape is now part of Wood Mackenzie. As we combine their commodity intelligence and proprietary short-term data sets with Wood Mackenzie’s world-class long-term analysis, we will be able to offer you unparalleled depth and breadth of insight across the entire natural resources world.

In the first of a three-part series, Suzanne Danforth and Amanda Fairfax examine the implications of IMO 2020 — past, present, and future — with an initial look at the state of the US distillate supply/demand balance.

As the weather turns colder in North America, the refined products market focus turns to distillate products. The fall season typically brings diesel demand, seasonal refinery maintenance, and expectations for how winter heating demand will shape the distillate supply/demand balance. This year the upcoming implementation of the International Maritime Organization (IMO) 2020 bunker fuel regulations adds another price-impacting factor to the mix, with the IMO set to lower bunker fuel sulfur specifications for ships globally from 3.5 percent sulfur to 0.5 percent sulfur on January 1, 2020.

US East Coast distillate inventories fell to 33.95mn bbls for week ending October 25, according to weekly EIA data, a record low for the fourth week in October. Conversely, EIA US Gulf Coast distillate stocks rose to 43.6mn bbls for the same week, the highest seasonal levels since 2012 for the region. For week ending November 1, this disparity narrowed slightly, with PADD 3 stocks falling 2.8mn bbls from the previous week to 41.8mn bbls and PADD 1 inventories rising by 2.6mn bbls to 36.6mn bbls, led by inventory gains in the US southeast (PADD 1C). However, weekly EIA distillate stocks for PADD 1B continued to fall for week ending November 1 to 16.6mn bbls.

This disparity between the two regions is unusual and related to several factors – distillate demand growth in PADD 1, reduced export levels out of PADD 3, PADD 1 fall refinery maintenance, and the shutdown of Philadelphia Energy Solutions’ (PES) 335,000 bpd Philadelphia refinery this summer following a fire. Colonial allocated its 1.2mn bpd Line 2 Pipeline starting in October, which carries distillate fuels from the US Gulf Coast to destinations throughout the US East Coast region. This is a typical seasonal occurrence exacerbated by reduced production and demand growth in PADD 1. With Colonial Line 2 full, the flow of distillates via pipeline into PADD 1B – the market hub for the Northeastern US — is at a maximum level, meaning that additional supplies may need to come via waterborne deliveries to balance the market if demand shocks occur. 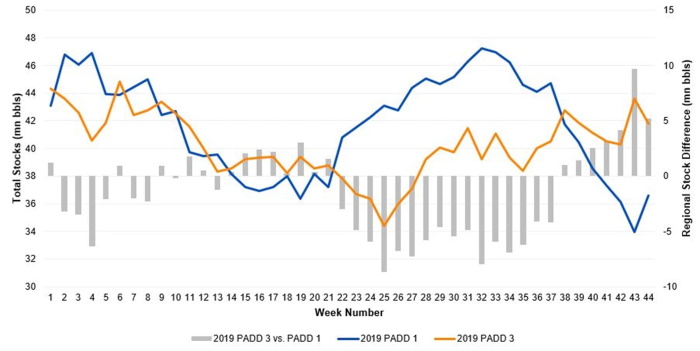 New York Harbor (NYH) heating oil/diesel inventories also fell to record seasonal lows in October, according to our data, which goes back to November 2013 when we first started to monitor NYH. NYH heating oil and diesel stocks fell to 5.37mn bbls for week ending November 1, dropping below levels observed in 2017, when Hurricane Harvey impacted US Gulf Coast refinery utilization and flows of refined products from PADD 3 to PADD 1. For week ending November 1, NYH heating oil/diesel storage capacity utilization dropped to just 29.2 percent, according to our data.

As a result of lower stock levels and expectations for increased distillate demand globally starting in 2020, prices for CME front-month NYH ULSD rose as high as $1.9863/gal October 24, up nearly $0.10/gal from the beginning of October. Spreads between ULSD futures and front-month CME Light Sweet Crude (WTI) futures stayed buoyant over the last year above $20/bbl, even in the summer when diesel demand is typically lighter than other periods of the year. In terms of time spreads, December 2019 CME ULSD futures widened to as much as $0.0564/gal premium to the March 2020 contract month October 8. Backwardation is typically seen in the winter, but this spread widened in recent months ahead of IMO 2020 implementation and expectations for increased diesel demand for both winter heating and bunker fuel blending. As of November 4, the December/March ULSD futures spread was $0.035/gal. A backwardated structure in commodity futures time spreads is usually indicative of a tightly supplied market, where prompter prices command a premium to forward prices.

Fall 2019 refinery maintenance season in the US East Coast brought utilization rates to two-year lows, as 2018 rates for primary processing, middle distillate, and heavy product processing stayed near 100 percent throughout that year, according to our refinery monitoring data. Inclusive of the PES Philadelphia refinery, which remained fully shut since early August, primary processing utilization in PADD 1 dipped to a seasonal low of 59.7 percent on September 30, and middle distillates utilization fell to 43.4 percent October 1. Our Refinery Stream Monitor, which aggregates crude and downstream inputs to refineries based on crude unit operations and secondary unit impacts, calculated crude runs in the East Coast at a seasonal low of 700,000 bpd for week ending October 11. 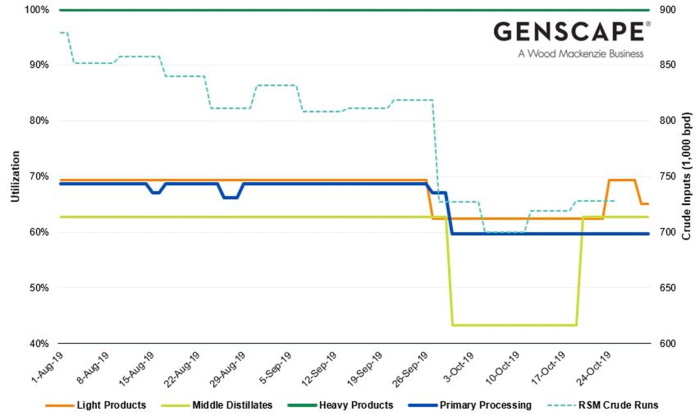 Distillate demand remained buoyant in PADD 1 for 2019 versus previous years. Our Supply Side Prime Normalized data – where daily rack activity is adjusted via EIA Prime Suppliers to reflect full rack market coverage – showed monthly demand up 1.7 percent and 2.4 percent for September and October, respectively, vs. EIA Prime Suppliers in 2017. Elsewhere in the US, fall distillate demand contracted in PADD 2 amid a weaker crop harvest season. PADD 3 experienced changes in demand due to declining rig counts and demand for diesel to transport drilling equipment, materials, and produced crude. As a result, total US diesel demand for October was 3.6 percent below 2017 levels, according to our Supply Side data.

Looking ahead, forecasts for winter temperatures in the coming months are varied. The 2020 Farmers’ Almanac is calling for colder-than-normal temperatures in the northeastern US (PADD 1A and PADD 1B), along with above-normal precipitation. In contrast, the National Oceanic and Atmospheric Association (NOAA) is predicting warmer-than-average temperatures for most of the US but warns that some areas may experience a colder-than-average winter. Above-average precipitation is expected to the northern tier of the US, according to NOAA, which, combined with swings in the Arctic Oscillation, could lead to large variability in temperature and precipitation.

Looking Ahead to January

The challenges in predicting winter heating demand for distillate, coupled with the uncertainty of how IMO 2020 implementation will affect distillate supply/demand balances and product flows in the US and globally, highlight the importance of our near-real-time fundamental data. Any changes in supply and demand trends could have a significant effect on price. In addition, the crude oil supply market is changing, as the availability of heavy crudes is decreasing and demand for lighter crudes is increasing. These fundamental changes compound the complexity of refinery future margins.
Source: Wood Mackenzie

Previous: China’s Jiangsu province to halt imports of coking and thermal coal: sources
Next: Don’t get distracted by freight spikes