The disruptive International Marine Organisation (IMO) 2020 shipping fuel regulation has triggered a shift in oil market fundamentals, increasing the desirability of low sulphur, sweeter crudes with the ability to be blended into the low sulphur fuel oil pool. As a result, the discount of sour to sweet crude has widened to 18-month highs, presenting refiners with both challenges and opportunities.

The IMO announced in 2016 that from 2020 onwards, only marine fuels with a sulphur content below 0.5% could be used in shipping, unless sulphur scrubbing facilities were installed. This has sent shockwaves up the crude oil value chain, where downstream demand for low sulphur IMO compliant fuel is driving unprecedented shifts in physical crude market dynamics.

A CHANGING ENVIRONMENT
It’s been a record breaking month for much of the global sweet crude complex, with grades such as Algeria’s Saharan Blend and Azerbaijan’s Azeri Light seeing increased demand from refiners. Azeri in particular has been a stand out grade, its distillate rich yield and low sulphur content have propelled it to all-time highs. This support is likely to continue, with grades yielding large volumes of compliant marine fuels highly profitable in the current climate. 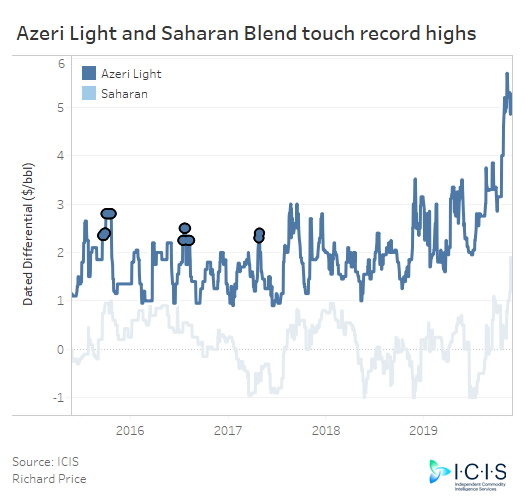 Meanwhile, sour differentials have languished on slumping demand, as refining margins nosedive to multi-year lows. The crack spread for refining a barrel of Urals in the Mediterranean recently fell to its lowest since the turn of the century, forcing some buyers to turn elsewhere. It’s understood that refiners are now looking to grades such as Libya’s Sharara, or further afield such as Midland from the US.

The shift in market dynamics to favour sweeter crude can be seen on a regional scale within the North Sea basket. Ekofisk, with a sulphur content of around 0.27%, is beginning to out-compete the sourer Forties and Brent Blend.

This IMO-fuelled divergence is also apparent on a global scale, as shown by the sweet-sour basket spread hitting its widest since March 2018 this week. The spread reflects trends in the wider crude market, with each basket containing crude from different regions. 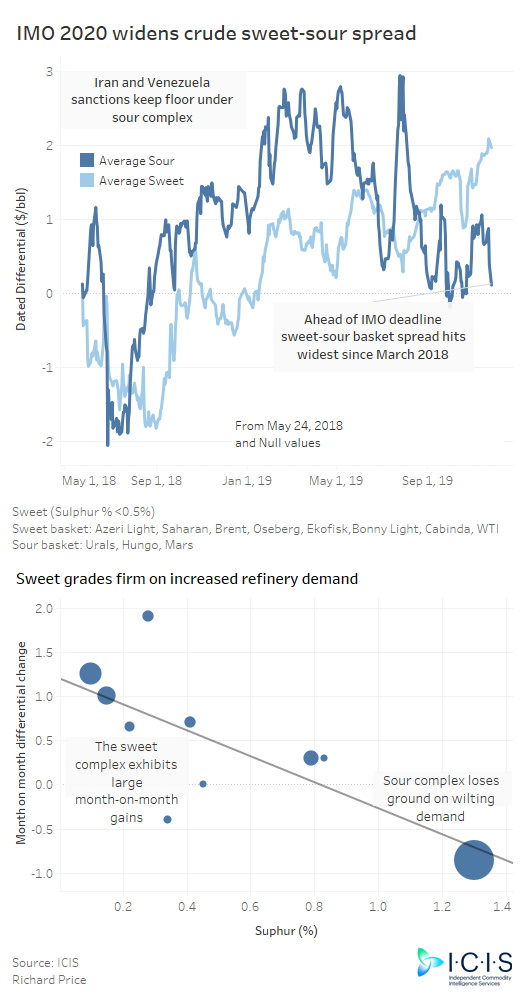 POTENTIAL GASOLINE SHORTAGE
There are concerns that the current inclination of refiners to optimise production IMO compliant fuels may lead to a shortage of gasoline in the coming months. Heavier fractions of the barrel, such as vacuum gasoil (VGO), can go through a fluid catalytic cracker (FCC) in order to generate lighter hydrocarbons, such as gasoline and low sulphur fuel oil. Due to the impending marine fuel regulation, refiners are gearing their FCC’s greater yields of low sulphur fuel oil, tempering gasoline supply.

This could apply further tailwinds to lighter, high naphtha and gasoline yielding crude oils such as Saharan by further supporting refining margins.

GLOBAL IMPACT
The regulation is set to have an impact on spreads between benchmark grades such as Brent (BFOE), Dubai and WTI across the globe, both exacerbating and limiting arbitrage plays. The Brent-Dubai spread marks the difference between the sourer Dubai and the sweeter Brent benchmarks. European crude is Brent-denominated, whilst the Middle East is priced off Dubai.

ANALYST’S VIEW
The BFOE-Dubai spread has taken an unusual pattern this year, with the typically positive spread turning negative in the early months of 2019, driven by the OPEC+ production cuts agreement as well as reduction of sour crude supply from countries such as Iran, Venezuela and Canada at various points in the year. The impact of the new IMO regulation on the BFOE-Dubai spread will be substantial in the near future, as demand for sour Dubai and related crudes will wane somewhat as simple refineries purchase more low sulphur crude to allow production of VLSFO. The value of this change will depend on the outcome of the next OPEC+ meeting in early December – should the alliance agree to cut production further than their current agreement, it will likely mitigate the widening effect of IMO on the spread. – Ajay Parmar, Senior Analyst – ICIS

The increasing discount of Dubai crude to BFOE will make European grades more expensive to buyers in Asia relative to Middle Eastern crudes. This could dent demand for European crude in the long-term, keeping a ceiling on differentials.
Source: ICIS by Richard Price (https://www.icis.com/explore/resources/news/2019/12/02/10450187/imo-2020-redefines-oil-market-dynamics)