Impact of the Evergrande incident on China

The central government has already sent a team to help Evergrande restructure. But this will not be a simple task. Evergrande is not a simple corporate.

The complexities include a bank located in Shandong, under a subsidiary of Evergrande. China’s authorities will need to look at how this bank is related to other financial institutions to avoid a liquidity crunch in Shandong and among smaller banks.

Then there is a pharmaceutical company, and an expressway company that Evergrande has invested in, which are also located in Shandong.

So the restructuring of Evergrande will be of concern to the local government in Shandong – this is not just a simple privately-owned company. 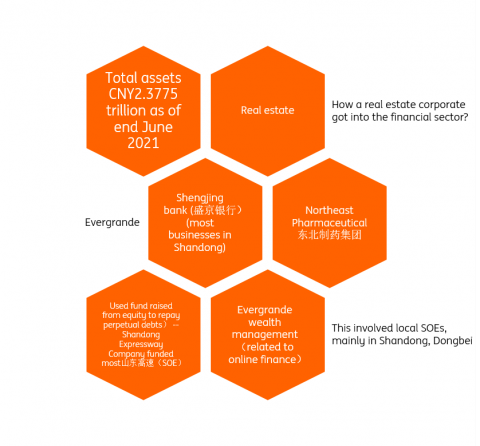 The scale of any restructuring and the problems Evergrande is facing

From Evergrande’s semi-annual report of 2021, total assets as of June 2021 were around 2.2% of China’s nominal GDP. But there could be indirect factors that we should also take into account.

The current focus is mostly on the wealth management products issued by a subsidiary of Evergrande. Some senior management members had redeemed these products early, which triggered anger amongst other investors. Most of them are staff of Evergrande and their friends and families. Three solutions have been given by Evergrande to these investors. One is that redemption repayments will be made in the form of Evergrande apartments (though these could still be under construction).

But the wealth management product incident is not at the core of Evergrande’s problem.

The more troublesome issue is the bank invested in by Evergrande. Did it also lend to Evergrande? Did it have exposure to other businesses that lent to or did business with Evergrande? Which other banks do business with this bank and what are their exposures? These are the questions to which we do not have answers. But they relate to the interlinkage problem noted in an opinion piece we also published today.

The main problem for Evergrande currently is that it does not have enough money to complete the construction of existing residential property projects. That means it cannot sell these properties and so cannot get cash to repay its debts.

We expect that the government’s restructuring team will help Evergrande at least get some capital, but it may have to sell some stakes to a third party, such as an SOE (state-owned enterprise). It could then continue to operate.

The spin-off of non-core businesses, for example, those that are not residential real estate type businesses, will probably be done first. After that could come sales of stakes that are at the core of Evergrande’s business.

How much of a stake would be sold is a big question. Evergrande’s current bond yields imply a very low value for the company. So the stake could be sizeable. We don’t, however, think it is inevitable that Evergrande will be bought out by an SOE and become an SOE itself.

The only comment we feel we can make with some degree of certainty is that the process of restructuring will likely be drawn out. We don’t anticipate a full and complete answer to the current market anxiety any time soon.

We expect USD/CNH will jump to near 6.50 during the national holidays. Then hopefully there will be some information on restructuring in November that may bring some comfort to markets.

Our year-end USD/CNY forecast is still at 6.70.
Source: ING