Home / Commodities / Commodity News / In September, the United States was at its lowest coal stockpiles since 1978

In September, the United States was at its lowest coal stockpiles since 1978

Coal stockpiles at U.S. electric power plants totaled 80 million tons at the end of September, the lowest monthly level since March 1978. As U.S. coal plants have retired and remaining plants are used less, the country’s total coal stockpiles have declined. In addition, increased electricity generation by coal plants during the summer of 2021 also reduced coal inventories.

U.S. coal power plants generally stockpile much more coal than they consume in a month. Physical delivery constraints in the supply chain limit how quickly coal plants can increase their stockpiles.

Days of burn, another metric to monitor the sufficiency of coal supplies, takes into account the retirement and lower utilization of coal-fired capacity. This forward-looking estimate of current inventory levels uses past consumption patterns to estimate the number of days an inventory level will last, assuming power plants receive no additional coal.

Because of less coal consumption as well as coal capacity retirements over the past three years, the days of burn of U.S. coal remain within the typical range, even though total stocks are low. For bituminous coal plants, largely located in the eastern United States, the average number of days of burn was 88 days in September, a slight increase from the 86 days of burn recorded in August. The average number of days of burn for subbituminous units, most of which are in the western United States, was 82 days in September 2021. 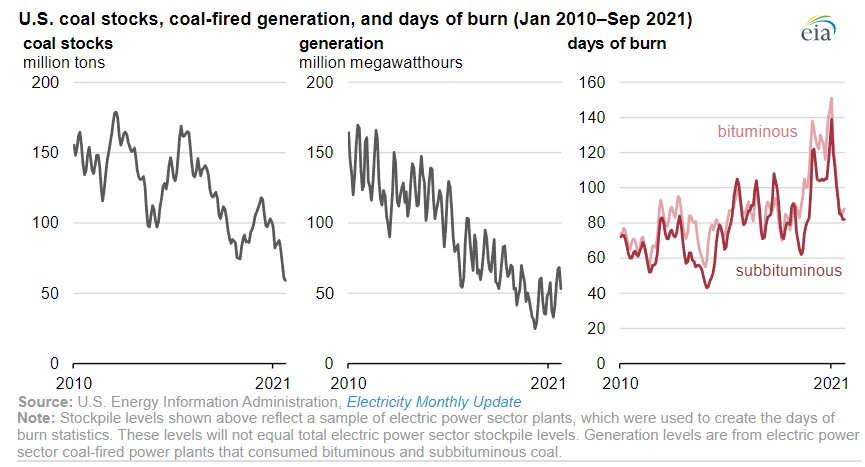 Given the long-term trend of declining coal consumption, many U.S. mines have begun to close. Reduced production capacity and supply chain disruptions have created some concerns about the ability of coal-fired generators to replenish stockpiles to last through the winter (October–March).