The U.S. Federal Reserve is set on Wednesday to announce the start of a plan to trim its $4.5-trillion portfolio of assets, much of it amassed in response to the 2007-2009 financial collapse, marking another milestone in bringing to an end the crisis-era measures.

If Fed Chair Janet Yellen gets her way, financial markets that had swung wildly with past shifts to the policy will barely shrug when the asset reduction begins, probably in October.

The plan is for the Fed to stop buying bonds so gradually that it will take years for its holdings to shrink to $3 trillion, around where some policymakers and economists estimate it will settle.

The Fed’s asset holdings stood at about $900 billion in mid-2008, before it began buying bonds to spur hiring and economic growth.

Years of planning and months of careful public messaging should make the asset-unwinding process about as riveting as “watching paint dry,” according to Reserve Bank of Philadelphia President Patrick Harker.

The U.S. central bank is expected to leave interest rates unchanged at its Sept. 19-20 policy meeting, according to a Reuters poll of nearly 100 economists, with markets pricing in a 52 percent chance of a rate hike coming at a December meeting.

The Fed will also release a fresh round of projections on Wednesday, laying out policymakers’ own expectations for rate hikes ahead.

With the U.S. economy growing fast enough to keep unemployment well below half its recession-era peak, the Fed is poised to be the first major central bank to begin pulling back from the final stage of emergency measures post-2008.

Under Yellen, the Fed has raised interest rates four times from near zero and stopped accumulating assets. The next stage is not to sell holdings but to halt the reinvestment of proceeds from maturing bonds.

Thanks to synchronized global growth and still-easy financial conditions, the Fed looks able to avoid past shocks, most notably the so-called “taper tantrum” in 2013 that rocked markets worldwide and spiked bond yields when then-Fed Chairman Ben Bernanke suggested the purchases could soon be reduced, or tapered.

“The market is going to be very sensitive to what’s going on here,” Peter Hooper, a former Fed economist who is now chief economist at Deutsche Bank Securities, said earlier this month.

“But we no longer need all this extraordinary monetary easing that we have seen since the crisis, so it’s time to do so.”

The Fed’s counterparts in Frankfurt and Tokyo will be among those watching the process most closely, given the potential ripple effects on their markets and economies, and the lessons to be learned from the U.S. experiment.

Combined, the three central banks hold some $15 trillion in assets, purchases that were meant to encourage riskier investing but that critics say may be distorting financial conditions. 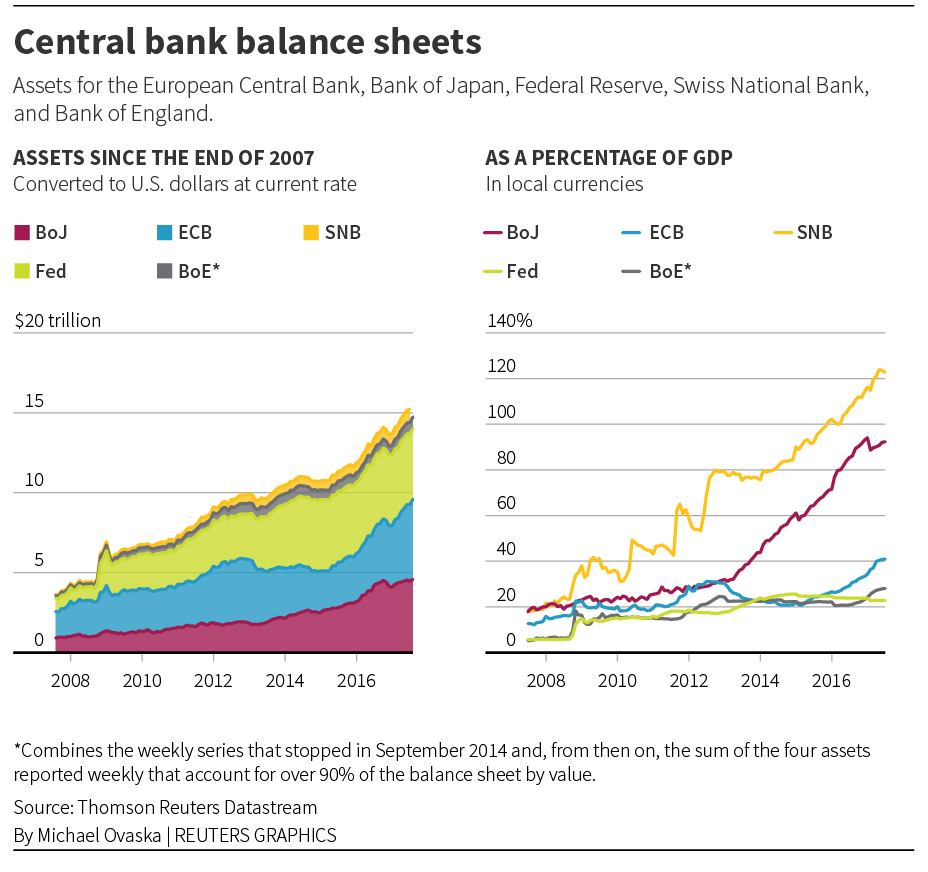 That should shed nearly $300 billion in bonds over the first 12 months, and nearly $500 billion over the second, according to analysts’ projections.

The main unanswered question is whether the central bank will spread its remaining monthly repurchases evenly across the spectrum of maturities, or whether it will focus on shorter-dated assets and accelerate the process.

That will affect how far long-term yields may rise as the Fed allows bonds to run off. Another wild card may be the pace at which the Fed’s mortgage-bond holdings shrinks, which depends in part on homeowners’ refinancing decisions.

Attempts elsewhere to exit asset-purchase programs, known as quantitative easing, have not met with success.

The Bank of Japan was the first major central bank to introduce such a program in 2001, and its end in 2006 was followed by an economic downturn.

The BOJ later had to restart quantitative easing and broaden it, and today is nowhere close to ending purchases.

The European Central Bank, for its part, undertook two rate hikes in 2011 that it subsequently reversed, then in 2015 started its own purchases.

But with financial conditions supportive, the Fed’s runoff will remain on “autopilot” unless there are “large adverse developments” that force adjustments, Fed Governor Lael Brainard said this month.
Source: Reuters (Editing by Bernadette Baum)