In Shipping Markets, Rollercoaster Rides Are the Main Theme

Turbulence, volatility and extreme highs and lows are the “name of the game” these days, when it comes to the shipping markets. In its latest weekly report, shipbroker Allied Shipbroking said that “taking a focused look at the dry bulk and tanker sectors, characterizing the chain of events that have transpired during 2019 as “bizarre” would be a polite term to say the least. Even though we still have two months to go before the close of the year and from experience being yet too early to say whether we have seen all that one can see, it is as good time as any to tale a quick look as to where we stand right now”. 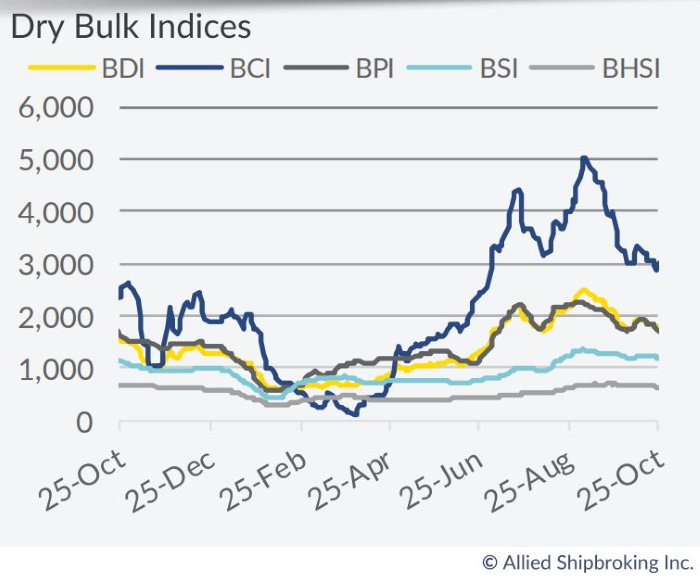 According to Mr. Thomas Chasapis Research Analyst with Allied, “after a 9-month period, in which we witnessed both long term highs and lows, the dry bulk sector seems to be currently enjoying maybe the most stable month since the beginning of the year. This is all measured using the relative standard deviation metric for the BCI-5TC and BPI-TCA figures, which are currently in the region of 4% for the October. Given that earlier in the year, we were seeing 31% and 25% respectively, we may well say that the market is currently moving in the “correct” direction (towards a more stable trajectory at least!)”.

Chasapis added that “furthermore, given the recent trends noted in freight rates and given that year-to-date average of the BDI being slightly below that of the year prior, it seems possible we will be right on time to finish overall with a year that will be showing positive gains. This is as far as we can go for the time being, given the lack of direction currently being portrayed in the market. The tanker sector, on the other hand, was holding back a positive surprise for the end. Once again, we learned, in an emphatic way, why supply-demand dynamics are “king”. In the mere idea of a potential tonnage shortage playing out, the market reacted quickly and firmly, pushing freight earnings to extreme highs in just a few days”.

According to Mr. Chasapis, “despite having seen quick movements in different market indices in the past (mostly on the negative side), this upward short-term rally, is rare, even for the shipping industry. So, what changed in the market? The range from top to bottom for the year in TCE figures for VLCCs is more than 5 times higher than that of 2018, while the respective range for TCE figures for Suezmaxes is more than double. The point of using this range metric is that it is a good measure for volatility, indicating fairly quickly to any shifts year-on-year, which in sequence, can also reflect an increase in uncertainty in market sentiment. This “shouting star” behavior in freight rates caused many to be baffled as to their market strategy moving forward, in other word, we have strategic uncertainty. That is because this type of short window of opportunity for excessive returns is extremely rare and almost impossible to predict in advance, while at the same time the windfall gains could help cover many periods of mediocre (or bad) markets”. 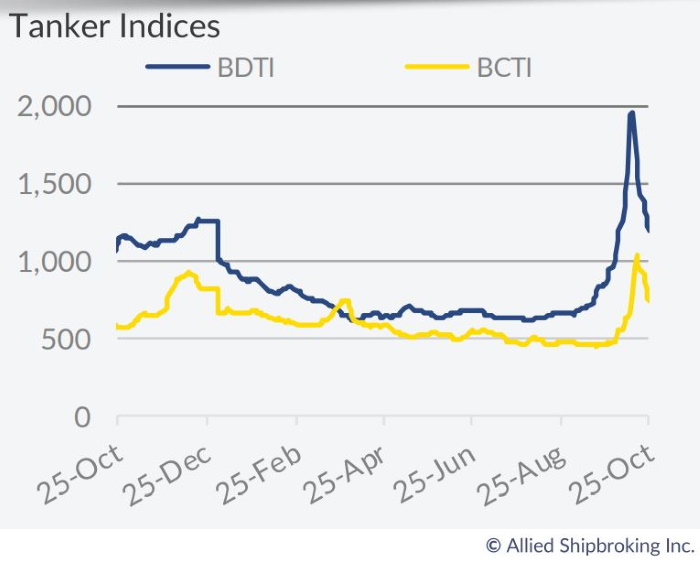 “So, at the end one is left wondering as to how to adapt to a market condition characterized by fatter tails with periodical positive or negative skewness? At this point, both sectors seem vulnerable to extreme events. Does this mean that the probability of single shocks is now truly higher? If this is the case, portfolio management should adapt too (in many aspects). Diversification in sectors, asset classes, freight market positioning, hedging and financial structures, could help mitigate some of the risks involved while helping capture some of the benefits. However, given that most of these are real options for only the “big” few, to what extent can this be seen as a reasonably strategy for the shipping industry as a whole. It seems as though most practitioners will just have to make do with good planning, preparedness and “hope for the best”, Allied’s analyst concluded.
Nikos Roussanoglou, Hellenic Shipping News Worldwide