Rosita Lau, senior partner of Ince Hong Kong office was presented the “Integration of Women in the Maritime Sector” Award at the Seatrade Maritime Asia Awards Ceremony which was held at the InterContinental Hotel in Hong Kong on 28 June. The award is brand new to this year’s “Personality & Community Award” categories and Rosita became the first outstanding female who received the accolade. This is yet another prestigious individual award that Rosita obtained over the years.

“Integration of Women in the Maritime Sector” Award is inspired by and in support of IMO’s World Maritime Day 2019 theme of “Empowering Women in the Maritime Community”. It aims to recognise the inspirational leadership and huge achievement of the industry’s leading women. Mr Chan Fan, Frank JP, Secretary for Transport and Housing in Hong Kong opened the ceremony on the night. Now in its 12th year, Seatrade Maritime Asia Awards is known as the “Oscars of Shipping & Maritime in APAC”, and one of the most influential awards programmes of its kind in the region. 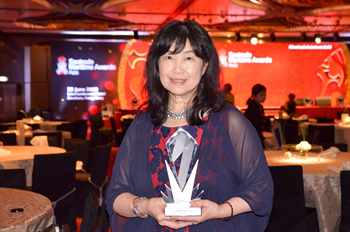 David Beaves, Managing Partner and Head of Hong Kong office commented: “On behalf of Ince, it is a tremendous honour to be recognised by the industry in Asia, and absolutely well-deserved for Rosita, who has been committed to excellence in the maritime industry for decades.”

Originally from Hong Kong, Rosita studied law in England and holds a Master of Law (LLM) degree of the London School of Economics and Political Science with A Mark of Merits. She is qualified to practise in England and Wales, Hong Kong, Australia ACT and Singapore. She has been a lead partner of the shipping, maritime insurance and trade practice of Ince for more than 20 years and is an icon practitioner in the marine sector, often regarded as the model of other female players of the maritime and connected industries. She specialises in shipping litigation and marine insurance, actively advising and representing clients of all sectors of the maritime industry including shipowners, ship managers, shipbrokers, charterers and insurers, insurers, port, terminal and logistics operators in Hong Kong, China and other countries in Asia Pacific, in local, regional and international markets. She handled many high-profile maritime disputes in Hong Kong and across the region.

Rosita is known for being tough, perseverant, hardworking, skilful in litigation and caring for clients. Since her joining Ince, she has been leading and developing the firm’s practice in Hong Kong and in China. With remarkable success, she is popular among shipowners and insurers and has a tremendous reputation in the market. Her leadership is not only in her legal practice but in training up a pool of talent for the firm and the industry. Many of them are holding senior posts in China and Hong Kong now. She has the vision to set up the firm’s Shanghai Office in record breaking speed even before China joined the WTO. She has the foresight to build up a large team of bilingual maritime lawyers for the firm before the handover of Hong Kong to China.

A frequent awards winner, Rosita has been awarded many prestigious international and regional awards over the years. She was ranked by Lloyd’s List as a Top Ten Maritime Lawyer and one of the 100 Most Influential Maritime Personnel in the World twice, in 2010 and 2016. She was awarded the Lloyd’s List Asia Individual Maritime Lawyer of the Year Award 2016. To date, she was the first and the only Hong Kong and also the first and the only Chinese lawyer who obtained all these international accolade. Rosita was also named by her peers and in-house counsel as the “Best in Shipping” by Euromoney’s Asia Women in Business Law Awards 2014. She is also the first and hitherto the only Hong Kong maritime lawyer who got this award. Rosita has been consistently been recognised by Legal 500 as a Band One leading shipping lawyer in Asia Pacific for consecutive 19 years since 2000 which is a record. Chambers Global and Chambers Asia Pacific have all along ranked her as a Band 1 Shipping Litigation Lawyer.

The original Seatrade Awards programme was established in London in 1988 with the full support of the IMO. The Seatrade Maritime Awards Asia program was launched in 2008 to raise the profile of maritime development across Asia and to underscore excellence in the fields of innovation; commitment to safety and quality; social and environmental responsibility, as well as enterprise and achievement.
Source: Ince

2019-07-07
hellenicshippingnews..
Previous: ‘No immediate threat’ to ships in Straits of Malacca and Singapore, says MPA
Next: Tallink Grupp has signed the loan agreement for the new LNG powered fast ferry

Iraq’s oil exports fall 6.6% in May as OPEC producer sold oil at $21/b: ministry