The year 2019 has been tough for the domestic steel industry as both stocks and commodity prices dropped significantly during the year.

With steel consumption slipping to unexpected levels on the back of an extended monsoon, the US-China trade war, and a liquidity crunch in the domestic market, among several other factors, prices of the alloy plunged almost 34 per cent in the period under review.

“The steel industry had not seen such a steep price fall in the past two-three years. Hot-rolled coil prices slumped continuously for 21 straight weeks (during the year) and have led to lowering market consumption estimates to 4.5 per cent for FY21,” said Amit Dixit, analyst with Edelweiss Securities.

The industry had estimated market consumption growth at 7 per cent at the beginning of FY20. In the last two years, domestic steel demand has grown 7-8 per cent. In 2019 so far, hot-rolled-coil prices have dropped to the lowest level of Rs 33,000 per tonne from the high of around Rs 44,000 per tonne in the year. 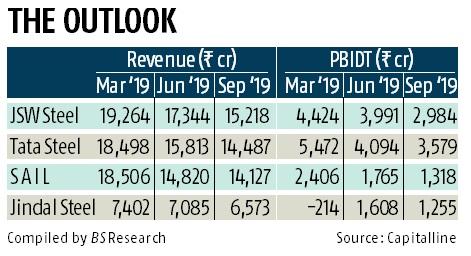 Meanwhile, large domestic steel players such as JSW Steel and Tata Steel had to cut production to align themselves with the market consumption pattern and announced capex cuts as well.

Taking the calendar year into consideration, since the quarter-ended March, most top producers have witnessed a fall in their revenue stream, leading to margin contraction sequentially, indicating a grim business climate. Jindal Steel was the only player with expanded margins due to higher exposure to long steel products, where the drop in revenue was not as sharp as that for flat players (see chart).

Flat steel products are used in the auto sector, while long products find wide application in infrastructure and construction. The unprecedented fall in the auto market due to a liquidity crunch hit flat players such as Tata Steel and JSW Steel the hardest.

Society of Indian Automobile Manufacturers (SIAM) showed passenger vehicle sales decreased for the tenth straight month in August by 31.57 per cent to 196,524 units. This was the sharpest fall registered since SIAM started recording data in 1997-98, said the industry body.

Amid the gloomy business environment, in which players relied on exports to meet revenue targets since realisations remained shifty back home, ArcelorMittal, the world’s largest steel producer, entering India in a joint venture with Nippon Steel was a positive development. The joint venture acquired Essar Steel early this month.

“Mittal entering India market has brought hope for better capacity utilisation along with expectations of new capex for the coming year,” said Nikunj Turakhia, president of the Steel Users Federation of India (SUFI).

“For the last couple of months there have been no imports. This is not good for the consumer as Indian players are not competitive in some products and importing such products is needed for the white goods industry,” said a Mumbai-based analyst.

Dual faced cold-rolled steel and a higher grade of galvanised-colour coated steel are some of the examples of such products.

Hoping the worst is behind, steel industry executives are looking forward to a better price scenario, coupled with a pick-up in consumption, mainly in the infrastructure and construction segments.

In the past couple of months, domestic producers have raised prices by Rs 2,000-2,500 per tonne.

“The recent price increase has led to a slight pick-up in demand since there is some stocking taking place and so the demand here is B-to-B (business-to-business). Only when the demand goes B-to-C (business-to-consumer) can we say that actual demand pick-up is happening in the market,” said the trader.

Though the trade war between the US and China is not over, it is not expected to aggravate, given that reconciliation is on its way, said brokerages.

“Reconciliation happening between the US and China should heal the global industry, which in turn will impact the domestic market positively,” said Vishal Chandak, analyst with Emkay Research.

The domestic industry remains hopeful that the Budget would also bring some relief to the steel sector.

The key to revive flat steel production in the market would be to improve liquidity for the auto sector, said officials.
Source: Business Standard