India’s containerised export trade with the world grew a healthy 10% in the third quarter of 2018 (Q3) due to broad- based recovery in the manufacturing sector, globally buoyed by a surge in demand from end-user industries. One of the contributing factors for higher exports is the sharp depreciation of the Indian rupee against the dollar which made Indian products more competitive. Additionally, the investments by Chinese firms to comply with strict environmental norms have increased their cost of production and together with the appreciating yuan, has reduced their production cost advantage, thus benefitting Indian exports.

The high demand for India-made vehicles, mechanical appliances; as well as refrigerated cargo such as seafood and pharmaceuticals, have driven the country’s export growth trajectory. The upswing witnessed by the local manufacturing sector during the last few quarters is reflective of the firming demand for India-made goods, including from non-traditional markets such as Algeria and Nigeria, which also helped to drive export growth. India’s drive to create a new farm export framework to liberalize trade in farm products and grow farm exports via the conclusion of multiple bilateral agreements is expected to yield a positive outcome.

Containerized imports maintained a stable growth of 9%, mainly due to a heavy inflow of paper into the country, along with metals from North American and European countries.

“The upward movement in global commodity prices, depreciation of the Indian rupee and recent major shipping-logistics reforms such as liberalized cabotage policy and Direct Port Delivery are instrumental in supporting the import-export trade between India and global markets. With fast growing trade figures that are significantly higher than the estimated global containerized demand growth (which in fact slowed during Q3), coupled with strategic competitive pricing, India is emerging as a favorable trade destination for both advanced and emerging markets.”

Though the export of meat was stagnant, the export of onions witnessed a 15% growth and exports of shrimps grew by 20%, thereby driving overall reefer exports by 27% year-on-year*. The demand for Indian organic food to the United States, the European Union, Canada, Israel and Vietnam has played a part in India’s reefer export development.

Containerised imports of paper, metal and white goods have driven the import of dry commodities by 18% year-on- year*. The import of paper continues in Q3 2018 from the United States, Canada, the United Kingdom and South Korea with an increased demand from the FMCG and packaged food segments, the rapidly growing e-commerce industry and the run-up to the upcoming elections. The surge in paper imports has raised some concerns for local paper manufacturing players, and there is an evaluation of a potential three years anti-dumping on certain kinds of uncoated paper from Indonesia, Thailand and Singapore. 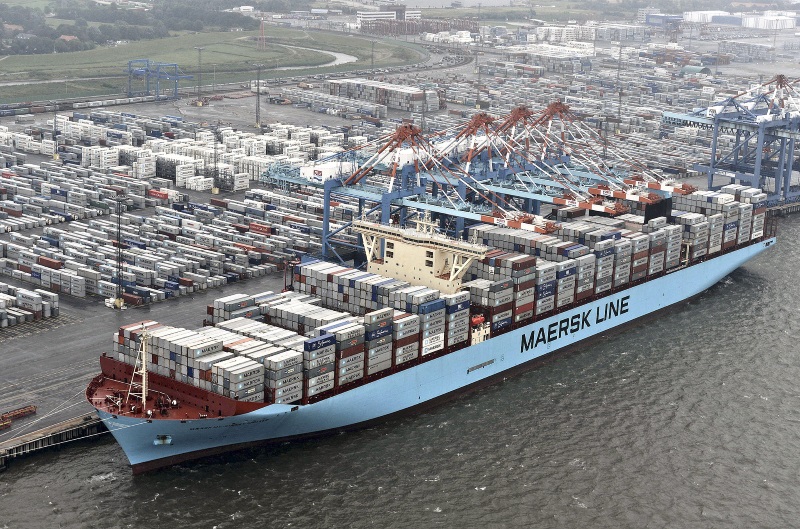 The opening of China’s pharmaceutical market, and its decision to cut tariffs on Indian cancer drugs (which are highly demanded in China as they are cheaper than Western cancer drugs) has propelled its pharma exports. The Indian pharma sector also witnessed high export to North American nations in Q3 2018.

The rise of exports of Indian two-wheelers, passenger and agricultural vehicles have resulted in a 36%* export growth in Q3 2018. Strong demand from regions of Latin America, Africa and surrounding countries like Nepal, Bangladesh and Sri Lanka have pushed the India-made vehicles to international markets.

Metal imports have increased 33%* year-on-year growth, on the back of metal scrap driving this growth from the North and West regions of India. In tandem, import of recyclables to India from United States, Belgium, United Kingdom and Netherlands have witnessed significant growth since China’s crackdown on the import of solid waste – including recyclables – owing to environmental concerns.

The growth in the export basket from West India has been led by an increase in the shipment of India-made auto- parts, vehicles and mechanical appliances to foreign shores. While the exports from West India witnessed a contraction of 15% in Q3 2017, the exports increased by 10% in Q3 2018 on the back of high volume trade with the United Arab Emirates, Nigeria and the United States.

With rising demand for chemicals, metal and mechanical appliances, the import to the East region of India has grown swiftly at 9% when compared to 3% in Q3 2017. Countries like Canada, South Korea and China have been the leading import origins for the growing region.

“Although the sector is looking at fast growth in the coming year, logistics infrastructure – which is the backbone of the industry – also needs to be strengthened simultaneously. The government is actively working towards this, as is evident from a cluster of initiatives such as the ‘Make in India’, ‘Digital India’, ‘Start-up India’ and ‘Skill India’ campaign. The efforts to create a more pro- business, investor-friendly environment is clearly visible as the economy recently advanced 23 spots to rank 77th in the World Bank’s latest ‘Ease of Doing Business’ index. As the industry foresees and awaits the benefits of cabotage relaxation and streamlining of exporters’ GST refunds, digitisation and blockchain technology in the supply chain infrastructure is set to transform the logistics industry in the coming years.” – Steve Felder, Managing Director for Maersk Line – South Asia
Source: Maersk