Prime Minister Narendra Modi’s government may be getting jittery about its $82 billion borrowing program as the debt market continues to sell off. With more than two months into the fiscal year, the continued lack of appetite from state banks and foreigners is starting to weigh.

Authorities have rolled out, or are mulling, new measures after steps in March failed to revive demand for sovereign bonds. The central bank on Friday raised the cap on how much foreigners can invest in a single bond to 30 percent of outstanding stock from 20 percent, and provided more flexibility on their existing investments.

The government may reduce issuance of shorter-maturity bonds, Economic Affairs Secretary Subhash Garg said in an interview last week. Issuing floating-rate notes and buybacks are among options that may be considered to rein in surging yields, the Financial Chronicle newspaper reported Monday, without citing anyone.

“Calling a top in yields is premature,” said Eugene Leow, a fixed-income strategist at DBS Bank in Singapore, even as he see India’s sovereign bonds trading close to fair value. “The global environment has become decidedly less tolerant of fiscal and external imbalances. Until these issues are addressed, India govvies are likely to stay under pressure.” 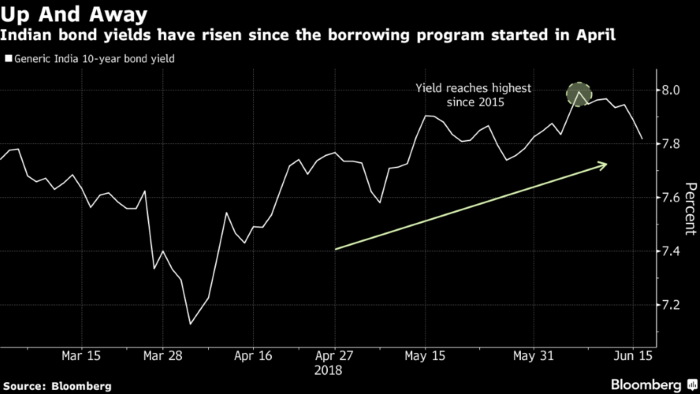 India’s budget deficit is still one of the widest in Asia and Modi’s challenge is to narrow it further amid pressures to boost spending ahead of national polls in 2019. That’s not going to be easy, with oil prices staying elevated. While a large part of federal borrowing has been pushed back to the October-March period, the states are on a borrowing binge.

“There are multiple things that need to be tried and one thing being discussed is can we do more floating-rate bonds,” Neeraj Gambhir, Mumbai-based managing director and head of fixed income at Nomura’s Indian unit, told reporters on Friday. “The borrowing program is more dynamic and the government is willing to listen to the market.”
Source: Bloomberg