India, World’s No. 2 Coal Buyer, Plans to Cut Imports by a Third

India’s coal ministry is preparing a plan to cut imports of the fuel by at least a third over the next five years, counting on an increase in domestic production and a jump in renewable output, according to people familiar with the plan.

Imports are seen falling to below 150 million tons by the year ending March 2024, down from 235.2 million tons India got from overseas in the last fiscal year, the people said, asking not to be named as the five-year plan is still being finalized. To meet the import reduction goal, state miner Coal India Ltd. will aim to raise its annual output to 880 million tons by fiscal year 2024, a compounded annual growth of 7.7% through the period.

Prime Minister Narendra Modi wants to expand the country’s economy to $5 trillion by 2024, from $2.8 trillion currently, and reducing energy imports and harnessing domestic resources are key to meeting that goal. The import reduction plan also points to the South Asian nation’s gradual shift away from coal to fight deadly air pollution that millions of Indians battle with. 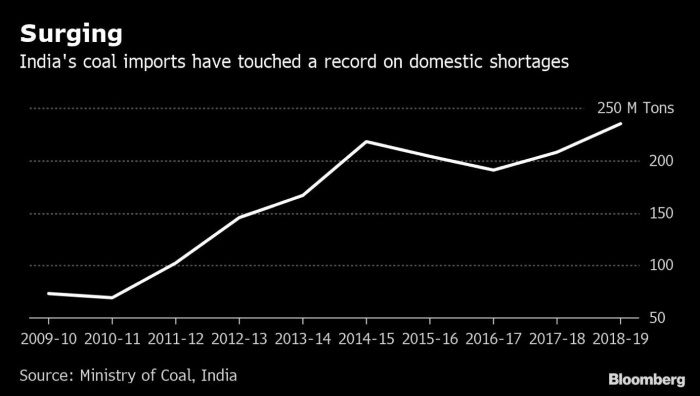 Imports will be dominated by coking coal purchases by steelmakers because domestic supplies are limited, the people said. Power stations that are designed to run on higher-quality imported coal would be the other major buyer.

Officials at Coal India and the coal ministry didn’t immediately respond to emailed requests for comment.

Besides increasing output at state miners Coal India and Singareni Collieries Co., captive coal miners, who extract the fuel for their own use, will also need to produce more to substitute imports, the people said. The country’s overall demand for the fuel is seen rising to about 1.2 billion tons by fiscal 2024, they said, from about 970 million tons in the year ended March.

To be sure, curbing imports has been on India’s agenda for some years. Yet, difficulties in purchasing land for mining, delays in environment approvals and a clogged railway network have combined to dampen those plans, with imports surging to a record last year. To add to that, Coal India has missed its production target every year since at least 2011. The miner missed its target of 610 million tons by less than 1% last fiscal year.

Still, the goal to reduce imports looks more achievable than before, as Indian Railways plans an overhaul of its British-era network and tracks reach new mines to enable output growth.

A record addition of green power capacity is also seen weighing on demand. Coal’s share in India’s electricity generation is estimated to come down to 50% by 2030 from about 72% now, according to the power ministry’s Central Electricity Authority.
Source: Bloomberg