Indian offshore fields used to be the main source of the natural gas consumed in India’s rapidly growing, energy-hungry economy; now however, it is LNG imports. This recent change is largely due to a decline in the country’s offshore gas output. But as part of a drive to reduce reliance on energy imports, the Indian government has been introducing policies designed to raise offshore gas production once more…

In 2016, Indian gas demand increased by an estimated 6.1% y-o-y to reach 5.65bn cfd, accounting for 7% of India’s primary energy consumption. Yet in spite of being closely linked to the country’s recent history of firm economic growth, Indian gas consumption was actually 10% higher in 2010, at 6.24bn cfd. As the graph suggests, this counterintuitive trend is largely due to supply-side constraints. After the start-up of the deepwater (850m) KG-D6 (Dhirubhai 1 & 3) field in April 2009, Indian offshore gas production grew rapidly, reaching a peak of 4.64bn cfd in March 2010. However, the field was barely at 70% of design capacity (3.2bn cfd) when severe production decline began. Gas consumption, which had risen on the back of KG-D6, was curtailed in line with falling production. It has since been able to partially recover only because of the start-up of an extra 5 mtpa of LNG regasification capacity in 2013. In 2016, LNG imports into India equated to 45% of Indian gas demand, versus 20% in 2010, whereas Indian offshore gas production had fallen from 68% to 38% of demand. 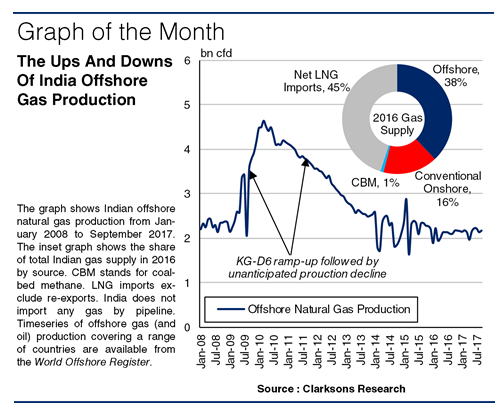 According to reports, the Modi government aims to reverse this trend as part of broader energy sector and environmental reforms in which the share of natural gas in India’s energy mix is to double to 15% by 2025 (even with firm growth expected in nuclear power and renewables). In order to incentivise investment in domestic gas production, the current system of gas pricing, in which prices tend to be set well below market rates, is being gradually deregulated. Plans also exist to reduce bureaucracy involved in oil and gas E&P in order to attract more IOC investment. A new licensing system for onshore and offshore blocks has been formulated too.

These measures are aimed at lifting onshore and offshore gas production. However, since the bulk of India’s proven gas reserves are offshore, the offshore sector appears better placed to benefit from any reforms implemented. A total of 141 gas fields (and 91 oil fields) have been discovered off India, of which just 24 have ever been developed. A further 13 are under development but 104 are potential developments. Of these 104 fields, 38% are located in water depths of at least 500m and 14% in depths of at least 1,500m in the Krishna Godavari Basin. Of course, reforms might be ineffective and broader market factors have a bearing too. But if reforms do entice greater IOC investment (compare Mexico or Brazil, for instance) then a potential rise in offshore development activity at these fields could stimulate greater vessel demand in India, including for deepwater-focussed units.

So in response to underlying gas supply-demand trends, the Indian government is making significant efforts to boost domestic gas production. Risks and uncertainties remain, but current Indian government policy clearly has the potential to be a boon for the country’s offshore sector.
Source: Clarkson Research Services Limited

2017-12-01
hellenicshippingnews..
Previous: COSCO SHIPPING Ports partners PSA Singapore to launch a new berth in COSCO-PSA Terminal
Next: The CMA CGM Group Creates The Leader In Multimodal Solutions For The Intra-European Market By Merging Its Subsidiaries Macandrews And OPDR