In a notice released on 5 May 2022, India’s Ministry of Power instructed all power plants to increase their imports of coal. Specifically, the Ministry demands that power plants designed to run on domestic coal start importing at least 10% of their requirements.

“As of 9 May, inventories at 105 Indian powerplants have reached critical levels at less than 25% of normative stock. Countrywide, stocks are down to only 32% of normative stock requirements, equal to nine days consumption at April’s average power plant utilisation level,” says Niels Rasmussen, Chief Shipping Analyst at BIMCO and adds “Power plants designed to run on imported coal have, meanwhile, been mandated to now run at full capacity, up from 41% in April.”

The government’s intervention comes as many states have suffered prolonged power outages since April and the country is two months into an unprecedented heatwave. Despite a year-to-date increase in domestic coal production of 9% y/y there has still been a lack of coal due to a 10% y/y drop in imports. 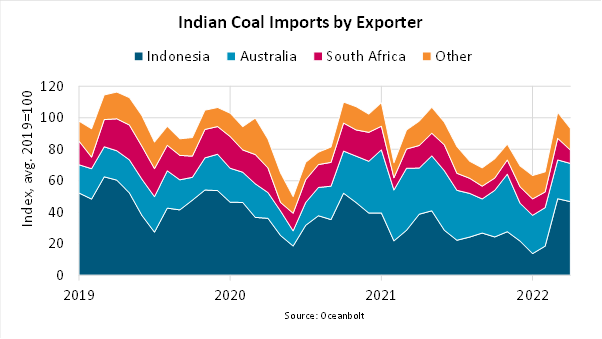 Coal imports have been lower than pre-COVID levels since June 2021 and the recent Indonesian export ban significantly hurt volumes in early 2022. In addition, recent coal price increases have resulted in lower imports as they caused import dependent power plants to run at a loss and to cut production.

The upcoming monsoon is likely to cause additional problems and lead to lower domestic coal production, thereby adding to import requirements.

“India will attempt to increase shipments from Australia and Indonesia, their main trade partners, but supply side difficulties could emerge. In Australia, recent heavy rainfall on the east coast is challenging coal logistics, and a requirement to sell 25% domestically limits Indonesian coal miners’ export potential,” says Rasmussen and adds “India may instead look towards Russia, especially from mid-August when the EU’s ban of Russian coal is fully implemented,” Rasmussen said.