“The market is assessing the impact of the new variant, especially as the oil complex is already fragile from the spike in cases and news of fresh restrictions in Europe and Asia,” a Singapore-based source said.

In October, India’s domestic gasoline demand rose 5.81% on the month to a record high of 2.75 million mt, the PPAC data showed Nov. 11.

The total number of doses administered in the world’s second most populous country has already crossed the 1-billion mark. This comes after a second wave of the COVID-19 pandemic in India around May derailed economic activity.

State-controlled refineries in India were heard to be operating at maximum capacity or higher as the transport sector received a boost on fewer movement restrictions amid improved vaccination.

Improved demand for transportation fuels in India prompted Indian Oil Corp., or IOC, the country’s No. 1 state-owned refiner, to run its nine refineries at an average of around 90% so far in October, company officials said Oct. 26. This was up from 82% in September.

The average run for all categories of refineries in India rose to 99% in October, compared with 89% in September, as domestic fuel demand rebounded on easing restrictions, the latest survey of the oil ministry showed Nov. 23, reflecting improved economic activity in Asia’s third-largest economy.

October’s run rate was also higher compared with the 87% run rate in the previous year, reflecting improvement in overall economic activity since the first wave of coronavirus in 2020.

“Run rates [in December are] expected to keep at current levels,” said an India-based refiner source, adding that “everything is as per normal now.”

“[Domestic] demand is very good, but we are keeping an eye on the global situation,” the refiner said.

The front-month FOB Singapore 92 RON gasoline crack against Brent swap averaged $9.60/b in October, up $2.50/b from the September average, Platts data showed. 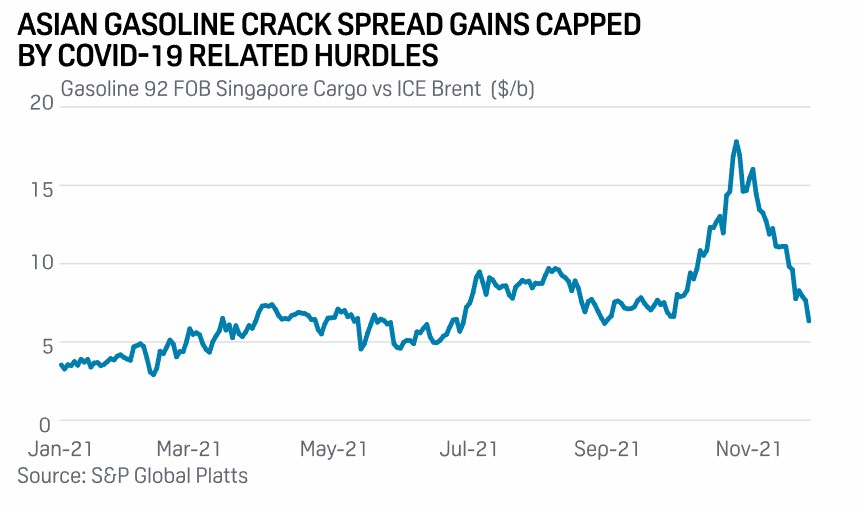 Moving forward, market sources are cautious as global mobility is expected to take a hit, with the emergence of the new COVID-19 variant adding additional pressure on gasoline demand.

“We are already approaching the winter months when gasoline demand is seasonally lower. Bearish headlines on COVID-19 will just add more pressure,” a market source said.

Meanwhile, S&P Global Platts Analytics expects some reprieve in India’s gasoline demand growth in November while still staying circumspect about the outlook in December as the threat of renewed local restrictions lurks if the variant spreads.

Several local media have recently reported that COVID-19 cases have been detected among some arrivals into India from South Africa. However, the variant had not been confirmed in India at the time of writing.

“We expect the gasoline demand to grow in Q4 on a quarter-on-quarter basis, with November expected to show a positive growth over October as suggested by mobility indicators,” Shreyans Baid, a South Asia oil market analyst with Platts Analytics said.

“December gasoline demand may face headwinds if there are restrictions due to the omicron variant from various state governments, like Maharashtra warning its citizens of a lockdown if COVID appropriate behavior is not followed,” Baid said.

The growth in gasoline demand may not be impressive in coming months as there has been a year-on-year decline in two-wheeler and four-wheeler sales due to semiconductor shortages, Baid added.
Source: Platts